PAWO CHOYNING DORJI is a Bhutanese filmmaker and photographer. His film, Lunana: A Yak in the Classroom (2019), was nominated for Best International Feature Film at the 94th Academy Awards, and had its world premiere at the BFI London Film Festival. Pawo speaks with PURNIMA RAMAKRISHNAN about the making of Lunana, the teachings of Buddha that inspired major parts of the film, and his hopes and wishes for young people today.

Q: Thank you so much for joining me.

PCD: Thank you for having me, Purnima.

Q: How did the idea of Lunana come about?

PCD: I grew up outside Bhutan, as my father was a diplomat. I was born in India, and lived in Europe, the Middle East, and America. After finishing college, I returned to India and joined a Buddhist monastery in Himachal Pradesh. And after all that, I returned to Bhutan.

Bhutan is very guarded about exposure to the outside world, so a lot of Bhutanese wonder what the rest of the world is like. When I returned, I went through the same journey as the protagonist of the film. He is reintroduced to his culture and falls in love with it. There is a lot of my own story in the film.

One inspiration was the younger population seeking life in Western developed countries like Australia, Canada, and America. In Bhutan, we are going through that right now. Thousands leave, seeking happiness.

I thought, “If our people are seeking life in the urban glittering lights of Western civilization, I will create a story where the protagonist goes to the opposite end of the spectrum. Let me take this protagonist to the remotest, most desolate place in Bhutan. ”That happens to be Lunana. In our language, Lunana means “the dark valley,” because it is so far.

So the theme was: could we really discover in the shadows and darkness what we are longing for and so desperately seeking in the light? We could have cheated on the location, making the movie in a village with electricity and road connection, but I didn’t want to do that. I wanted us all to go through the experience and live in the darkness. I felt that it would then translate into the film. It is almost a docu-feature.

Q: Lunana is a spark of inspiration. I can’t associate the word “darkness” with it.

In many ancient traditions, a teacher is given importance next only to God. You don’t really know God, but you know the teacher who can take you where you need to go. You chose to portray the protagonist as a teacher, rather than a doctor, a social worker, or any other noble profession. That aspect has a deep significance. Can you tell me why you made that choice?

PCD: There are two reasons. One is exactly as you say. Bhutan’s culture, tradition, and spirituality are based on Buddhism. And the teacher-student relationship is very important. We have this name “Dalai Lama” meaning “root teacher.” The root teacher takes the most important position in our life. So, I made the protagonist a teacher as he holds the most important role in Bhutanese culture and society, yet he is not happy and he wants to leave.

The second reason is that I am trying to bring reality into my films. Reality is my inspiration. In the Bhutan of today, there are two common things. One is that most young people are leaving for Australia. The second is that most of the people who are quitting their jobs are teachers.

I had many different aspirations. One was to tell the story of Bhutan, and another was to highlight and preserve our disappearing traditions. Yet another was to reach out to the teachers who are quitting their jobs every year. I told my friends that if I can save one teacher from giving up their profession, it would mean more than any award the film received.

Q:That is a very noble idea. There is another interesting thing I observed in your film. Today we live in an age of excess. We produce more food than we can eat and we dump the excess food. We fight wars for trivial matters and aspire for space habitation, and yet you show in your movie that there are extremely joyful people living amongst us who do not have shoes or electricity, and who do not know how to use a toothbrush.

While the gap is vast, and I cannot even fathom how it could be bridged, you very sublimely, subtly, and creatively bring this “social activism” to the forefront. My heart is deeply touched. Did you consciously think of these things, or did it just emerge?

PCD: I am a lover of Bhutan. I made this film as a love letter from Bhutan to the rest of the world. I wanted to showcase and celebrate our culture and our traditions. I grew up outside Bhutan in a very materialistic world, where, as you said, there is a lot of excess. Where many people are not happy. Bhutan advertises itself as a happy country, and there is some truth in that. Unfortunately, we are losing touch with that because we too are falling into the race to modernize, the race to become worldly. Bhutan’s traditions are rooted in Buddha’s teachings. Buddha always talked about wishing all beings to be happy.

But what is true happiness? In this movie, I wanted to touch upon what happiness is for the people of Lunana. It is really two things. One is contentment. Contentment is a person saying, “I have enough.” He is much wealthier than any rich person. A rich person is never content, always longing for more and more, so they are never happy. In Lunana, the people have very little, yet they are content. Their lives are full. They are not rich but they are wealthy people.

Buddha also taught that we must accept impermanence. Much happiness comes from that acceptance because everything is always changing. When we are attached to those things that are changing, then we will not be happy.

So I really wanted to put across these two teachings of contentment and acceptance.

Much happiness comes from
acceptance because everything
is always changing. When we are
attached to those things
that are changing,
then we will not be happy.

Q:The stark difference that you brought out between wealth and richness is a very poignant message.

Spoiler alert: for those of you who have not yet watched the movie and wish to do so, please stop here, otherwise, continue reading.

The protagonist leaves Bhutan for Australia toward the end of the movie. I was waiting with bated breath to see what he would do. I thought he would have a change of heart and stay back in Lunana to educate the poor children. But he left. I was surprised, yet I felt relieved that it was realistic, not like a Hollywood movie where the impossible happens. The ending made me weep. So, why did you choose for Ugyen to leave Bhutan?

PCD: Because my movies reflect reality! In a real story, Ugyen would leave. He has passion and ambition.

The second reason is the magic of storytelling, of cinema. If he had stayed in Lunana, the story would have ended there. He stayed for the kids. He stayed for his yak. He stayed for the girl, Saldon. That would be the end of it. But by Ugyen going to Australia, and singing the song he learned in Lunana in the club in Australia, the story continues. When the movie ends you wonder, “What did Ugyen do? He sang that song. Does it mean he will go back to Lunana?”With that thought, each viewer creates their own ending. Then it becomes a much more personal journey.

Q: That is eye opening, Pawo. Lunana will always be close to my heart. It talks about the choices we make, our accountability, and the repercussions of our decisions. I hope and wish that all young people will watch this movie.

I would like to ask if you have any message for young people today.

PCD: I hope you will watch Lunana. It is a small film that my team and I made in the world’s remotest classroom, dependent completely on solar power. We made it with no money, and it went from the world’s remotest classroom to the Academy Awards. At the Academy Awards, I did not represent Bhutan, or myself, or this film. I represented every struggling filmmaker, storytellers who at times do not have the confidence to believe they can make it. If a film like ours can make it, if you put your heart into it, if you have the passion, there is the possibility to make it. That is how amazing this world is.

Second, I am from Bhutan and I am a Buddhist. I want to share something about my culture and my spirituality. Buddha said that among all the animal footprints, the elephant’s footprint is the most majestic, powerful, and inspiring. Likewise, the Buddha said that among all the thoughts we might have, the thought of impermanence is the most majestic and inspiring.

My advice to young people is
to reflect on impermanence,
accept impermanence and change,
and use them as tools
for your career.

So, my advice to young people is to reflect on impermanence, accept impermanence and change, and use them as tools for your career.

Q: Thank you, Pawo, for your wisdom. 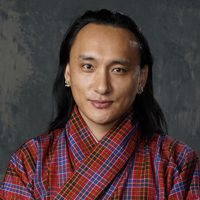 Pawo is a Bhutanese filmmaker and photographer. His film, Lunana: A Yak in the Classroom (2019), was nominated for Best International Feature Film at the 94th Academy Awards, and had its world premiere at the BFI London Film Festival.