DAAJI introduces us to a user’s guide to daily living and human transformation. This series is based on a book written more than 75 years ago, by RAM CHANDRA, called Commentary on the Ten Maxims of Sahaj Marg, which is entirely relevant for anyone wishing to evolve to their highest potential in today’s world.

Some 75 years ago, a holy man in a remote town in Uttar Pradesh in the north of India decided to put into words some amazing truths that he had received through direct perception in a superconscious state. As a result, he came up with a method by which people could completely transform themselves and reach the highest level of consciousness possible, and go beyond. This method was based on taking the essence of the ancient practices of Raja Yoga, and modifying them for the present era of humanity. His name was Ram Chandra, and he was known to many as Babuji. Here is the preface to his first book, Commentary on the Ten Maxims of Sahaj Marg, which was originally written in the Urdu language, and has now been translated into over 30 languages worldwide:

In this book I have endeavored to put up in words those spiritual secrets which have up till now come down from heart to heart. But since they relate to direct perception, which depends upon the study of Nature and can be revealed by means of vibrations, it is not only difficult, but almost impossible to express them adequately in words. “True love cannot be expressed by words. This is the very reality which is inexplicable in any way.” In this respect, I may therefore say that it is proper for the readers to try to reach up to the real spirit, ignoring the defects of expression and language, and be profited, and help others to be profited by it.

He was eager to share his knowledge with everyone, to help us all experience those elevated states of consciousness that he had experienced. Being a householder he knew that spirituality and materiality are like the two wings of a bird, and no one can soar on one wing alone. He was a humble man of simple means, but in the spiritual field he was a giant, the like of whom no one had seen before. His concern was not for himself, or just for humanity, but for the whole universe. In order to bring positive change, peace and growth to suffering humanity, he knew that inner transformation was needed. He had developed a simple method that was easy to practice, and that was available to everyone, irrespective of culture, race, age, class, religious belief, education and sex.

The discoveries Babuji made were simple but revolutionary in the field of consciousness, much like the discoveries that Einstein made a few years earlier in the field of physics. In some ways these two men were alike. Their greatest ideas came to them through direct perception in superconscious states. More importantly, unknown to each other, they were both exploring similar phenomena – one from the perspective of spirituality and the other from the perspective of science. Through his now famous equation E=mc2, Einstein proposed the interchangeable nature of mass and energy, creating tremors in the world of science. But Einstein was limited to the manifested world of physics. Babuji was able to express the inexpressible, and he shared his views. He gave us an understanding that transcends the aspect of interchangeability of mass and energy, writing in a letter to one of his associates:

The energy itself in the long run returns to the Absolute – the cause of the power. The whole of matter, every particle of the body, becomes energy and then goes to its absolute.

Einstein only knew the method to convert mass into energy, and not beyond it. In short, I can say that energy can also be converted into mass and this is a very easy job.

Having only studied up to high school level in rural India, Babuji would not have been taken seriously by those scientists in the evolving field of quantum physics, yet the discoveries he made through direct perception were literally mind-blowing. He not only saw directly that matter and energy were different vibrational states of the same manifestation, but that consciousness was the basic stuff of creation: Everything created since the Big Bang has emanated from consciousness.

There is a sweet story of a meeting between Babuji and a physicist in London in 1972, through a mutual friend. The physicist did not consider Babuji worth listening to, as an uneducated simple man from rural India, until Babuji proceeded to describe to him in detail the intricate structure and movement of the particles in an atom. The physicist was astounded and asked Babuji how he knew this, to which Babuji replied, “I penetrated matter and I have described to you what I observed.”

During this same period, quantum scientists were spooked by the observer effect – the fact that an observer can affect the experiment. Some held the view that it could be because everything is fundamentally made up of consciousness, so the consciousness of the observer will influence the consciousness of the object of the experiment. This idea did not initially go down well with the scientific community. Even today scientists are divided on this issue. The entire confusion of the observer effect is easily solved, however, when we understand that a grosser observer can affect a subtler experiment, but a subtler observer does not affect a grosser experiment.

The subject of consciousness is now being researched and debated not only by scientists, but also by people in all fields and walks of life. We have come full circle, in fact, as this was also the case in ancient times in many cultures.

The Discovery of the Center and
the mapping of consciousness

In the meantime, back in the 1940s, Babuji not only demonstrated that we can change our consciousness by a special method of meditation on the heart, utilizing pranahuti or yogic Transmission, he also went on to discover and map the various incremental levels of consciousness, and what lies beyond consciousness.

Spiritual scientists from ancient India were familiar with the seven chakra system of energy consciousness, and most believed that the crown chakra was the pinnacle of spiritual achievement. Babuji was to change all that. Along with his teacher, another great sage of the 19th and 20th centuries, Lalaji, they together discovered a more complete chakra system, culminating in the 16th chakra (3 lower chakras plus 13 chakras from the Heart onwards), which Babuji called the Central Region, the source of everything. They had opened human awareness to an entirely different dimension of existence.

Lalaji transmitted the knowledge of the Central Region to Babuji, and also taught him the techniques to master that Region. Based on his own personal research and experience, Babuji then mapped the stages of consciousness, from the most solid levels of matter to the very source, which he called the Center. This was the first time in the history of humankind that anyone was able to accomplish such a task. 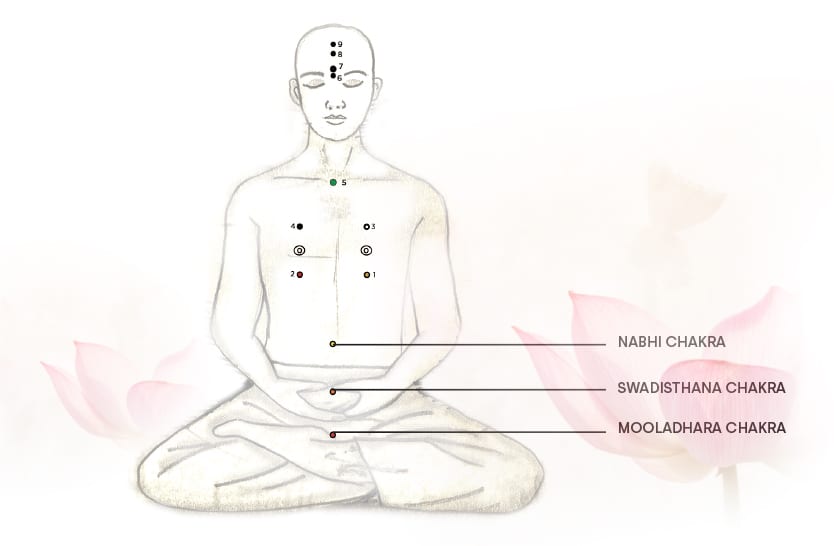 Meditation is a
quantum experiment

Babuji taught a simple method of meditation on the heart, rooted in the ancient traditions of Raja Yoga, yet simplified and modified to meet the needs of modern life. He explained why meditation is the best way to change and expand consciousness. And unlike traditional methods of Yoga that took many years of austere practice to bring the mind to balance, Heartfulness was able to give instantaneous results, because of the revolutionary use of pranahuti.

What happens in meditation? In the last fifty years, scientists have made impressive strides in understanding how meditation impacts our physiology, especially the brain. This has been made possible by advancements in measuring technology, like brain scanning and its ability to pinpoint what function of the brain is improved with meditation. Some of the conclusions are that meditation reduces stress, improves sleep, reduces blood pressure, improves learning and memory, and increases happiness. The human brain is an amazingly complex system and science has only taken baby steps in understanding it.

In contrast, yogic scientists have known the value of meditation since ancient times. They knew about the observer effect long before science figured it out. In fact ancient texts like the Vedas and Upanishads could describe the various stages of consciousness in meditation that correlate with the brain waves now identified by EEG machines at each stage. For example, the ultimate depth of meditation, a stage called Samadhi in Yoga, correlates with the very slow delta waves produced by the brain during deep sleep. Typically it takes many years of meditation to achieve a deep delta state, but Babuji enabled his students to experience Samadhi when they first started meditating, through the utilization of pranahuti.

Each one of us transmits his or her vibration to the Universe, and an evolved Master of caliber, who is in osmosis with the Center, can transmit the essence of that Center, pranahuti, into the heart of a student, thus enabling the student to advance faster and more effectively. This is what happens in the Heartfulness tradition.

Yogic scientists have also recognized the role of the Central Nervous System in a much wider context than just the brain. The heart, the spinal cord, the connection between heart and brain as two aspects of the spectrum of consciousness, and the consciousness at the cellular and atomic levels, have all been vital components of physiology in yogic science, which modern scientists are now starting to understand.

Each one of us transmits his or her vibration to the Universe,
and an evolved Master of caliber, who is in osmosis with the Center,
can transmit the essence of that Center, pranahuti, into the heart of a student,
thus enabling the student to advance faster and more effectively.
This is what happens in the Heartfulness tradition.

Babuji perfected the method of Heartfulness and the science of yogic Transmission as a means to help human beings evolve and master the various incremental stages of consciousness. But he was equally clear that this was not enough. Without working on personal development and character, this would lead nowhere, as there would be no integration or wholeness of the physical, mental and spiritual bodies of the human being. Spiritual transformation is an internal transformation of the vibrational field of consciousness, whereas personality transformation is equally important for the process to be complete.

As a result, his first book, Commentary on the Ten Maxims of Sahaj Marg, is a practical guide for both – how to live our lives in harmony with Nature on a daily basis. The maxims follow the 24-hour daily cycle, starting with waking in the morning, and finishing with going to sleep at night, guiding us in all areas of life. For that reason, I am calling this series “A User’s Guide to Living.”