The sixth vikshepa is avirati, which translates as “absence of renunciation,” or “absence of non-attachment.” Avirati is the result of indulging, of going beyond needs to desires, and of gratifying the senses. It is the opposite to one of the four main sadhanas of Yoga, Vairagya or renunciation. The over-indulging of the senses can be associated with many types of behavior, but it is most often discussed in relation to sexual behavior, thoughts and attitudes, because they involve all the senses.

In the modern world of ready abundance and consumerism in many countries, avirati also relates to other aspects of life, such as our relationship with food, and indulging in addictive or obsessive behaviors towards other things, e.g. TV and digital gadgets, drugs and alcohol. It also underpins our fascination with fashion, interior design and decoration. In fact you could say that today’s fashion and cosmetics industries are the expression of avirati or over-indulgence of our sensory stimuli.

Avirati is the result of indulging,
of going beyond needs to desires, and
of gratifying the senses.
It is the opposite to one of the
four main sadhanas of Yoga,
Vairagya or renunciation.
The over-indulging of the senses can be
associated with many types of behavior,
but it is most often discussed
in relation to sexual behavior,
thoughts and attitudes,
because they involve all the senses.

Let’s first explore why it is important to transcend this obstacle in relation to sexual behavior and desire. In Yoga, passion is known as kama, and it is a divine emotion, necessary for the continuation of the species. If tomorrow we all became celibate, humanity would disappear within 100 years. Kama can never be destroyed, but it is important to know how to manage it wisely.

First of all, why does sensual energy build up in our physical system? As children, our creative energy is applied to many different activities – play, art, music, dance, storytelling, imagination, problem-solving, and so many other things. Then around the age of fifteen, a lot of this creative energy is channeled into procreative energy.

Where does the energy in our system come from? It accumulates in us when we eat food, drink water, and take in energy from the sun and other sources. In many of us, it accumulates in the lower chakras, as it cannot easily move up into the higher chakras unless and until they are awakened. These lower chakras govern our basic instinctual survival nature, and they are known as the mooladhara, swadisthana and nabhi chakras. 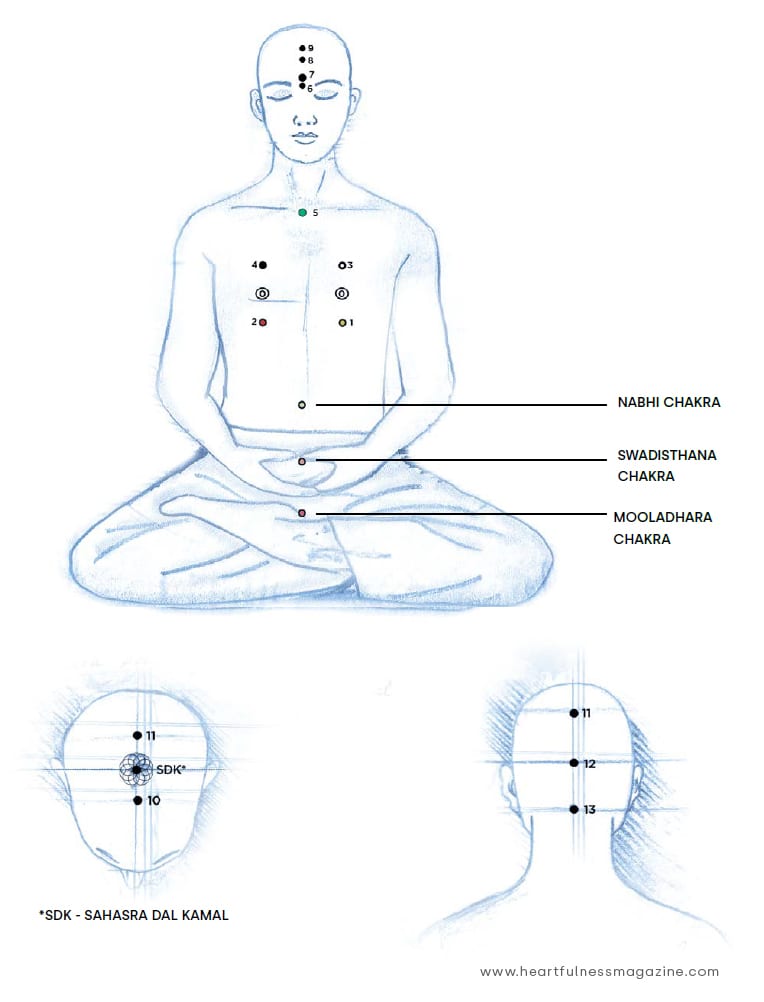 When our energy is centered in these lower chakras, we function like other animal species, with our focus on basic survival instincts: eating to survive, competing with others for resources, and procreating for the survival of the species. There is a very big difference, however, between other animals and human beings. Most animals eat simply to survive – they don’t take more energy than is required. Similarly, most animals have a defined breeding season – once a month, once every few months, once a year etc., so that the number of young born is well regulated and the species manages it’s population size naturally. They utilize the energy input and output in a very regulated fashion that has developed through years of evolutionary process. Human beings, on the other hand, have distorted the natural patterns and cycles because of desire. Because of the build-up of energy in the lower chakras, sex acts like a safety valve, a release, in which the energy taken in is released back into nature, and the build-up is dissipated.

Over-indulgence in food can lead
to blockages in the energy
flows of the human system,
as the pranamaya kosha becomes burdened.
This is one of the reasons why fasting can be
so beneficial in balancing the human system.

Our relationship with food is also associated with the lower chakras, but instead of dissipating energy, eating adds to the energy balance, compounding the problem. And over-indulgence in food can lead to blockages in the energy flows of the human system, as the pranamaya kosha becomes burdened. This is one of the reasons why fasting can be so beneficial in balancing the human system.

Ram Chandra of Fatehgarh wrote about this balancing of energies in a letter to one of his associates in 1924, saying, “Let us observe keenly our anatomical structure and understand the various faculties active within the human body. Let us consider only two of these in the first phase of our study. These are the two basic instincts: satisfying hunger and thirst and satisfying the carnal desire, which is rampant.

“The feelings of hunger, thirst and the need for sleep indicate that there is deficiency of nutrition or water, or that the body is tired, lacks strength, and needs rest and recuperation. This results in the desire to satisfy that feeling, which is fulfilled by Nature through the mind and senses. In Hindi, this desire is called kama shakti, the force of passion or sensual desire.

“Corporal desires are also part of kama shakti, and relate to the instinctual need to reproduce. But the other limb of the same kama shakti is subtle, and does not fulfill the deficiency, instead ejecting the surpluses and fulfilling the deficiencies. So, the human seed or seminal fluid, which accumulates in a cavity in the body until there is no more room, is ejected by the subtle force. Finally if this essence, which is thrown out of the body, is implanted in a fertile womb, the other wish of nature is then fulfilled, namely, that from one there become many.

“Surplus and waste substances that accumulate for long periods in the body breed poisonous matter. This you can witness as the result of constipation or of being unable to urinate. But an excess of semen creates a sense of embarrassment and affects the wisdom of the heart.”

By doing a regular yogic practice with the help of a capable Guide, we are able to shift the fulcrum of energy upwards. This happens in Heartfulness from the very first meditation sessions with a trainer, when the heart chakra is awakened. The yatra or inner journey is activated, and as the chakras are traversed, the center of energy moves upward, so that the human system becomes a transformer. Energy is transmuted into more and more subtle states. Matter becomes energy and eventually it becomes Absolute: physical becomes subtle becomes causal. The most peripheral and complex eventually becomes central and pure.

In addition, Heartfulness offers a simple morning practice know as Point B Cleaning, which is done first thing in the morning in order to manage the build-up of sensual energy. It is practiced for five to seven minutes as follows:

Fix your attention on Point B and imagine that all impurities and heaviness are going out of Point B from the front of the body. Imagine that as this process is going on, the glow of the soul begins to appear from behind. 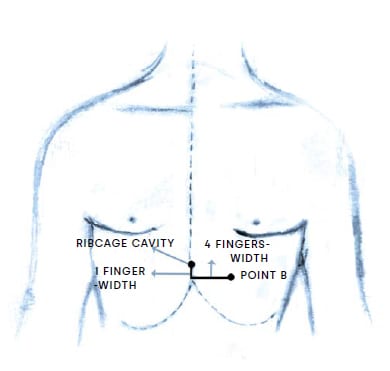 Just as celibacy is not the natural state, at the other extreme, passion can also get out of hand and end up in sex addiction or perversion. Through Heartfulness practices, instead of either extreme, the procreative energy is managed and balanced. For this purpose, the cleaning of point B works as a passion detox or sex detox, so that sensual desires are no longer overwhelming. Imagine the harmony that would result in human societies if people practiced this technique daily!

Life then takes on a different dimension and a new meaning. Nature transmutes to sequentially higher stages of supernature; consciousness transmutes to sequentially higher stages of superconsciousness. This is how our being expands, and our subtle bodies can disengage from their close attachment to the physical body. The center of our pranamaya kosha, of the energy flows in the human system settles in the heart, where it belongs, at the middle link of our existence.

Ram Chandra of Fatehgarh wrote: “The heart, being at the center, functions to absorb the effects of the higher and lower regions, which is its characteristic.” He demonstrates this in a simple diagram:

As each chakra awakens, with the support of the Guide’s Transmission, the energy moves higher and higher, and sensuality is no longer the driving force.

Sex offers a more physical form of ecstasy, because it involves the outer senses and desire. When love is also there, it is not purely physical; it can also involve subtler aspects, but it is still at a lower level. Higher bliss, known as ananda in Yoga, which emerges naturally with the spiritual journey, is more subtle than lower physical pleasure. The more subtle it is, the more potent. That is why yogis have run after bliss, and extolled it so much. But they can also indulge in desiring the ecstasy of these subtler forms of bliss. Avirati is perhaps even more of an obstacle in these higher realms, as it is so potent.

Many seekers have been caught in this trap of meditating to find their bliss. Many wait for those intoxicating states of consciousness that can be found in deep meditation, in various stages of Samadhi. They are not willing to renounce this bliss to go beyond it to the Absolute state. In such cases, meditation is also like a drug for ecstasy. This is one of the biggest hurdles in the spiritual journey – moving beyond satchidananda to higher states of Reality and nothingness. As Ram Chandra of Shahjahanpur once said, “I feel irritated to see someone acclaim satchidananda. This is like a worm feeding on cow dung and admiring its flavor. The satchidananda state is nothing compared to laya avastha.”

When love is also there,
sex is not purely physical;
it can also involve subtler aspects,
but it is still at a lower level. Higher bliss,
known as ananda in Yoga,
which emerges naturally with the spiritual journey,
is more subtle than lower physical pleasure.
The more subtle it is, the more potent.

Even in a marriage, over a lifetime together, the pleasure and bliss in each other’s company becomes more and more subtle, until eventually it reaches a stage of apparent nothingness. Some time back, I was lucky enough to observe an elderly couple taking a stroll along the river in Princeton, New Jersey, their steps totally in sync. You could see they had been together a long time. They didn’t need to speak much, communicating their togetherness in the subtlest ways. They settled on a park bench overlooking the river, pulled out a flask of tea and some sandwiches, and together enjoyed their lunch in perfect silence. Their movements were in tune – the way she poured the tea was full of gentleness and care, as was the way he received the cup. They ate their sandwiches and enjoyed the stillness of the riverside.

They had reached a stage in their marriage of purity in connection and communion. This is the other end of the spectrum from the days of young love, when a couple is more physical and verbal in their demonstration of love. Now, extrapolate this evolution to a higher dimension altogether, and you will have some idea of where we may be headed with seeking subtlety in the spiritual realm. And eventually a subtle state of Vairagya arises very naturally, without force or repression, because the field of consciousness has been purified.