The ancient science of psychology

SISTER NIVEDITA shares her insights on yogic psychology, the supernatural, the master, consciousness and the purpose of life in this enlightening article about yogic psychology and the highest goal of human attainment.

India is undoubtedly the land of the understanding of psychology. To Hindus, more than to any other race, it may be said that men appear as minds. Concentration of mind is to them the ideal of life. Such differences as between talent and genius, between ordinary goodness and the highest sainthood, between moral weakness and power, are by them understood as simple differences in degree of concentration. This preoccupation of the race is partly cause and partly effect, doubtless of the fact that the study of psychology has been organized in India as a science from the earliest times.

Long before the value of writing (for the notation of knowledge) was even suspected, the quiet registration of phenomena in the communal consciousness had begun by the interchange of ideas and observations. Millenniums before instruments and laboratories could be thought of as having any bearing on scientific enquiry in general, the age of experiment was fully developed amongst the Indian people with regard to this most characteristic of their sciences.

Millenniums before instruments
and laboratories could be thought of as
having any bearing on scientific enquiry in general,
the age of experiment was fully developed
amongst the Indian people with regard to
this most characteristic of their sciences.

It is not surprising that in the singularly wide range of knowledge thus accumulated in India, many phenomena of the mind, which appear to the West as abnormal or miraculous, should be duly noted and classified. Thus, hypnotism and many obscure forms of hyperæsthesis and hyperkinesis – the most familiar of these being healing, thoughtreading, clairvoyance, and clairaudience – offer no overwhelming difficulty to the student of the ancient Indian psychology, or Raja Yoga as it is called.

We all know that the great value of scientific thought lies in enabling us to recognize and record phenomena. It matters little that a disease is rare, if only it be once noted as within the field of medical practice. It has a place thenceforth in the human mind. It is no miracle, only because sooner or later it will be classified. It has a name. The conjunction of diagnosis and treatment is now a question of time only.

Something of the same sort applies to the trustworthy fraction of what are commonly referred to as ‘psychic phenomena’. Occurrences falling under this head, when authentic, are obviously no more supernatural than the liquefaction of air, or the extraction of radium. Indeed the propriety of the word ‘supernatural’ is always open to dispute, inasmuch as if once a thing can be proved to occur, it is clearly within nature, and to call it supernatural becomes, by that very fact, absurd.

In India, the phenomena in question are regarded as cases of extension of faculty, and their explanation is sought not in the event but in the state of the mind witnessing it, since it is to be supposed that this will always, under given conditions, register a perception different from the accustomed.

The Swami was able, on his arrival
in the Western sphere of psychical inquiry,
to classify all knowledge as subconscious,
conscious, and superconscious.

In Ramakrishna Paramahamsa, living in the garden of Dakshineshwar, his disciples had been familiar, for years, with many of those mental characteristics which are noted in the books as distinctive of the highest degree of concentration. He was so responsive that he would meet them at the door on their arrival and begin at once to answer, without being told of them, the questions that the boys carried written in their pockets.

His perceptions were so fine that he could tell by touch the character of anyone who might already have come in contact with his food, his clothes, or his mat. It ‘burnt’ him, he said, of an impress from which he shrank; or, on another occasion, “Look! I can eat this. The sender must have been some good soul!” His nervous system, again, had been so charged with certain ideas that even in sleep he shrank from the touch of metal, and his hand would, apparently of its own accord, restore a book or a fruit whose return to its owner the conscious mind had failed to prompt.

No Indian psychologist would say of one of the world-seers that he had talked with angels, but only that he had known how to reach a mood in which he believed himself to talk with angels. Of this condition, the disciples of Sri Ramakrishna saw plentiful examples. … 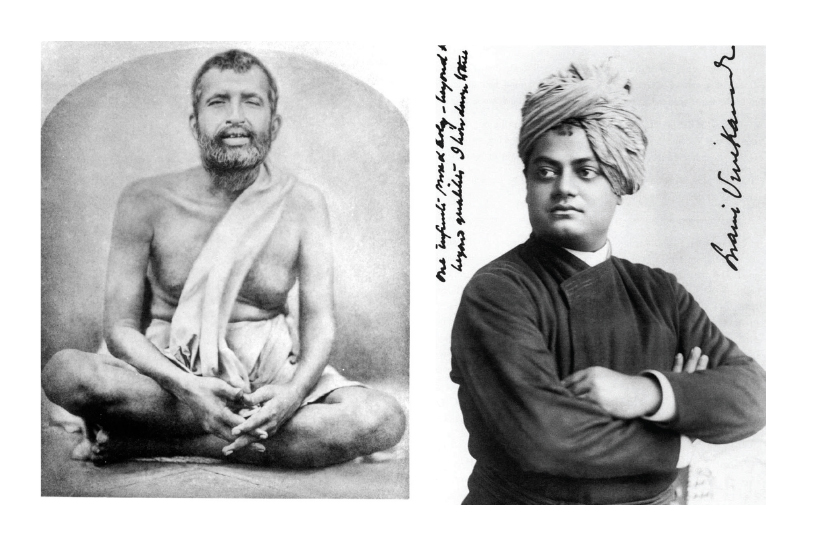 … By such stimulating of each man to his own highest and best, or by such communication of experience as one and another could bear at the time, Ramakrishna Paramahamsa built up the rigorous integrity and strong discrimination that one sees in all who were made by his hand. “We believe nothing without testing it,” says one Ramakrishnananda by name. “We have been trained to do this.”

And when I enquired from another of the disciples what particular form this training took, he answered, after deep thought, that it lay in some experience given of the Reality, from which each gained a knowledge that could never be deceived. “By our own effort,” says Vivekananda in one of his earlier lectures, “or by the mercy of some great perfected soul, we reach the highest.”

Now the life of the guru is the disciple’s treasure in hand; and it was undoubtedly by an instantaneous analysis of all that he had seen and shared of the extensions possible to human faculty that the Swami was able, on his arrival in the Western sphere of psychical inquiry, to classify all knowledge as subconscious, conscious, and superconscious.

The two first terms were in common enough use in Europe and America. The third he himself added to the psychological vocabulary by a masterly stroke of insight, authenticated by his own personal knowledge. “Consciousness,” he said on one occasion, “is a mere film between two oceans, the subconscious and the superconscious.”

Again he exclaimed, “I could not believe my own ears when I heard Western people talking so much of consciousness! Consciousness? What does consciousness matter! Why, it is nothing as compared with the unfathomable depths of the subconscious and the heights of the superconscious. In this I could never be misled, for had I not seen Ramakrishna Paramahansa gather in ten minutes, from a man’s subconscious mind, the whole of his past and determine from that his future and his powers?”

The certainty of the dictum laid down in Raja Yoga that intuition, when genuine, can never contradict reason, is also indisputably due to the same comprehensive range of experience. …

Only to the soul that is strong enough
to avoid these temptations does the door stand open.
In the words of Patanjali, “To him who is able to
reject all the powers, comes the cloud of virtue.”

THE GOAL OF ALL

But even if so, knowledge of the phenomenal could never be the goal of effort. The return of wandering wills from one plane of physical tension to another could throw but little light on any true concept of immortality. Only by renunciation could this be reached. Any dwelling upon the occult led inevitably, in the Swami’s opinion, to increase of desire, to increase of egotism, and to the fall into untruth.

If the ordinary good of life was to be given up, for the sake of the soul, how much more assuredly so these vanities of supernatural power! Buddha’s abhorrence of wonders was the eternal glory of Buddhism. At best their value could only be to give a little confidence, and that only for the first steps. “If there be powers, they shall vanish away; charity alone remaineth.” Only to the soul that is strong enough to avoid these temptations does the door stand open. In the words of Patanjali, “To him who is able to reject all the powers, comes the cloud of virtue.” He alone attains the very highest.

Excerpts from:
Noble, M., 1967. The Complete Works of Sister Nivedita, ‘The Master As I Saw Him’, Chapter 13, ‘Our Master’s Relation to Psychic Phenomena So-Called’, Ramakrishna Sarada Mission, India.