SIDDHARTHA V. SHAH is the Director of Education and Civic Engagement and Curator of South Asian Art at the Peabody Essex Museum in Salem, Massachusetts, USA. As a curator, he develops exhibitions that tell the stories of the artists, communities, and traditions of South Asia, as well as important moments in the history of the region, and what they reveal about nation-building and self-discovery. He strives to create alignment and synergy between the museum’s education and curatorial departments while focusing on community engagement and impactful programming. Here, he speaks with VANESSA PATEL from the Heartfulness Institute.

Q: Hello Siddhartha. Thank you for your time. You have been extremely busy with various projects. Can you tell us about one in particular – your role on the Board of the Anne Frank Center for Mutual Respect?

SS: About ten years ago, I became close with clients who were involved with the Anne Frank Center. I told them that I had read Anne Frank’s diary three or four times, and it really impacted me. Then, I went to college in Amsterdam for a semester, right across the river from the Anne Frank house, so I have always felt a connection to her. They invited me onto the Board because they saw that I was deeply committed to human and civil rights. Anne Frank’s experience does not apply to the Jewish community alone; it is relevant to different kinds of struggles around the world, such as LGBTQ issues, with which I identify, and race, here in the United States and elsewhere. I got involved with the Anne Frank Center through this alignment of vision. My goal is to make sure that Anne Frank’s story reaches as broad an audience as possible.

Q: You have also developed a program for nurses to strengthen their observation and communication skills, using art to reduce anxiety and stress. Nurses and caregivers seem to be the forgotten people, and the impact on their mental health isn’t often addressed. How have you used the medium of art?

SS: We take nurses through the South Asian galleries at Peabody Essex Museum, and we have them look at certain paintings. Then we talk about what they see. We also help them see what they don’t see. If you look deeper into paintings, there are things you may not notice. Then we ask, “How does this relate to your work?” “When you’re taking a diagnosis, what is the information you’re collecting?” We help them assess what they see and apply that to their relationships with their patients. In terms of the mindfulness piece, as you said, nurses and caregivers are forgotten, and we don’t think about the amount of stress they’re under, particularly during the pandemic.

We have them look at two paintings by Ghulam Rasool Santosh, which are very simple geometric images with simple colors. They slow down and allow their eyes to wander over and across the paintings, noticing what associations they have. One of the paintings is predominantly black and one is predominantly white. At the black painting, we ask them to think about what associations they have with the color black; then we ask them to think about the same with the white. We tend to think of black as dark and negative, and white as positive, so I ask, “Can black feel expansive?” “Can white be so bright that it constricts your vision?” I ask them to flip their associations, which also have racial connotations. It is an exercise in perception of color and race. They realize that if they take a little more time, art can help them calm down.

I curated another exhibition called Zarah Hussain: Breath, where a meditation on breathing is done through the paintings, and there is a digital animation that expands and contracts every five and a half seconds to help the viewers slow their breathing and enter a state of relaxation. We have eight paintings by the artist that are curated as four pairs; in each pair, one is an “inhale” and the other is an “exhale.” Then there is a room with the projected animation; it is generative so the color patterns vary every time. People enter this room, which is dark other than the projection, and they calm down completely and stay there for a long time. It has been wonderful to see.

Also, we created a version of the animation online so that people could experience it from home during the pandemic. You can adjust the length of the breathing cycle and the color pattern. Whenever you need a break from meetings, you can turn on the animation.

A meditation on breathing is done through the paintings,
and there is a digital animation that expands
and contracts every five and a half seconds
to help the viewers slow their breathing
and enter a state of relaxation.

SS: It is calming, and it is significant because breathing is deeply connected with Covid-19, which takes away people’s ability to breathe. And it connects to the death of George Floyd here in the United States. He said, “I can’t breathe” as some of his final words. A meditation on the breath just seemed so relevant this past year.

Q: A lot of what I am hearing is art in service of community, so I want to know what led you to take your professional practice to these spaces. You are committed to building community and mending wounds through art collaboration and respectful communication. How easy or difficult has it been to do this?

SS: I entered PEM as the curator of South Asian art. After about two years, George Floyd died, and our museum responded like a lot of institutions by acknowledging his death. When I saw the message, something about it did not feel comfortable, so I told our director, “I come to you with full respect, but I need to say that I am not comfortable with the messaging. Here is a different way I think we could have messaged this.” That’s when he understood that I have ideas about engaging the community in a respectful way.

That’s when we started talking about my other role as Director of Education and Civic Engagement, which is new for the museum. Ours is a very big museum with a large footprint, but, like a lot of museums, our relationship with the community is complicated. We are not reaching a lot of people. My work is to find out how we can reach them. It’s difficult because we don’t decide what the community needs; the community tells us what they need. I go out and ask questions, but they don’t know me or my agenda, and whether they can trust me. I have been asking questions for over a year and we have started a bunch of new initiatives based on these conversations. But we need at least two years to gain people’s trust before we will see any change.

The process is slow, and we need to show that we are committed. For example, I have a conversation with the YMCA, find out how they feel about us, what they like and what they don’t like. Then our team discusses the feedback, and we go back and ask, “Have we heard you correctly?” If yes, then we tell them we are going to develop a menu of partnerships. We think of four or five ways we can work together, then show them and get their thoughts. We do this a few times before we commit to one partnership – not too many, because we first need to make sure we are doing it correctly. We implement that and then we reconnect to talk about what went well, what did not go so well, and then decide that in six months we will do another project based on the outcome. It is a very slow process, but it is helps us earn trust.

Q: I love that you said it’s not up to you to decide for them what they need, but it’s a space for them to tell you what is important to them. Is this also where your drive to set up intergenerational initiatives comes from?

SS: A lot of museums have an older audience, which is predominantly white, well-educated, and often wealthy. School groups also come on field trips, but we don’t have a lot of teenage involvement. It is hard to draw teens, and that is the age when I fell in love with art. So, how do we create connections between those who are already coming to the museum and those who are not?

During the pandemic, two populations have been very significantly impacted: Young people, who could not see their friends, and older people, who were the most vulnerable and isolated. We wondered how we could bring these two communities together, so we created a virtual art-making evening once a month called Create Night. People signed up, we mailed the art supplies to them, and they came together online – old people, young people, artists – all doing art together for about an hour. They got to talk to people. That is a way to get intergenerational programs going.

We also started a bilingual initiative, because we have a very significant Spanish-speaking population here. We also host English as a Second Language classes for adults, and a teen program for learning English. We thought, “Why don’t we have the Spanish-speaking teens run tours in Spanish and English to teach the older Spanish speakers about the museum?” The teenagers speak to the adults, and they engage with one another.

Q: That is amazing! You’ve put together two groups of people who are unlikely to interact with each other, creating an opportunity to discover what they can learn from each other. Is this what you meant about your plans to reach more audiences in “original and unexpected ways”? It also seems a great way to improve the footfall in the museum.

SS: Exactly. We are looking at unexpected ways of doing that. Another project happened last Thanksgiving: Older people living in public housing needed meals delivered. We participated in a campaign to send cards with the food, wishing them love and care. Our employees and a lot of artists drew beautiful things in these cards, and some also asked their kids to get involved. The people receiving the cards didn’t meet the people who sent them, but there was a connection happening.

Q: That’s beautiful! I can just imagine the joy it must have brought people who are lonely and don’t have anyone else to call their own.

SS: So lonely. Lonelier these past two years than most people have ever been in their lives. 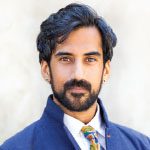 Siddhartha is the Director of Education and Civic Engagement and Curator of South Asian Art at the Peabody Essex Museum, Salem, Massachusetts, USA. He curates exhibitions and focuses on community engagement.