GUILA CLARA KESSOUS, UNESCO Artist for Peace and art therapist, uses drama therapy to help people “let go” of their suffering through a cathartic process. It is a way for people in Rwanda, Bangladesh, Congo, and Afghanistan to find solace. Guila paints the portrait of four people suffering from post-traumatic stress disorder who she accompanied to their respective countries. She has also designed a course on “Theatre and Humans Rights” that is taught at Harvard University.

The Prince and the Poor Man

The woman with black eyes has a wonderful way with French words. Intimidated, she clicks her tongue against her teeth and looks up to me. I reassure her and make it clear that I will not ask her to talk, but to express what lies within her, deep within her, to let it out. I know about her story: Martha lives in Ngoma, in Rwanda’s eastern province, near the women’s prison. This mother of five witnessed the slaughter of the Tutsis in 1994. She, too, once sincerely believed she could kill “for the good of humanity,” as the saying went back then on the waves of Mille Collines radio.

I suggest we perform the exercise of “The Prince and the Poor Man” that Peter Brook used to teach a person to find “the right posture.” Asking her to portray a noble personality, I see the body of the septuagenarian straightening up and I watch her as she finds a glorious way to hold her head, so typical of faith in oneself and faith in humanity, found only in people who have not lost the beauty of their ingenuity. I try to spur her on, suggesting she tries to walk like a queen, taking care to slowly spread her feet on the ground, heel first and then toes. I notice the effort of her leg. It carries the history and muscles of thighs that were strong enough to drag themselves out of this hell. She looks around her with an air of Banyiginya haughtiness; the Nyiginya clan, who represent the nobility of the Batutsis.

I then submit a text to her from Hamlet:

… I know not “seems.”
’Tis not alone in my inky cloak, good mother,
Nor customary suits of solemn black,
Nor windy suspiration of forced breath,
No nor the fruitful river in the eye,
Nor the dejected haviorof the visage,
Together with all forms, moods, shows of grief,
That can denote me truly. These indeed seem,
For they are actions that a man might play;
But I have that within which passeth show,
These but the trappings and the suits of woe.

Before it even ends, I see her body shrivel up, withdrawing from the bliss of forgetfulness to return to what Peter Brook called “the Poor Man,” the human broken by their condition. She utters each and every one of these words distinctly while facing me. She concludes with a whisper, “Mu-ra-ko-ze,” which is the Kinyarwanda word for thank you, and then she curtsies!

I have no hatred in me

Francesca is repeating the sentence to me. She emphasizes every word and makes sure I’m jotting everything down. “How could I only explain that to my family? Since they’re rejecting me and think this is all my fault. I’m a disgrace to them.” I ask her if she’s willing to work on this feeling of shame with acting. She nods. Francesca was raped in the Congo, as so many other women have been, since rape is a weapon of war in the DRC.

When she talks to me, she blinks a lot, just to be absolutely sure that she is still alive. So often have men imposed their will on her that at some point she was not sure of anything anymore. “I felt this predator had no desire, he just wanted to dominate.” Francesca lives in Bunia, the capital city of the Ituri province. She has endured many sexual assaults since she was a little girl, including in school where this kind of punishment is common. I suggest trying a body awakening exercise that will allow her to slowly come back to herself and to possess her sore body again.

The “Energetic Shower” exercise involves “stretching one’s arms toward the sky” while imaginary drops “run” from the ceiling by moving one’s fingers and slowly bringing them down to micro-massage the forehead, the eyes, the cheeks, the chin, the back of the neck and then the neck. I watch her as she proceeds meticulously. I can feel the skin untighten on her forehead, the wrinkles fade out. Once the neck area has been reached, it’s time to switch to soft right-hand taps on the left side of the body. She talks to me: “If my daughter saw me doing this, she’d tell me ‘Mom, stop, you’re almost fifty now.’” She pats her left shoulder with her right hand and then the full length of her left arm. Then, the opposite. I can see her body stretch out and ready itself to “embody” a role that will help it healing. Francesca is looking at me, intrigued.

I hand a poem to her:

So long as the blade has not
Cut off that brain …

These lines from Rimbaud make her smile. And I see her surrendering to the role, a sheer force getting hold of her. She now hits me with verse:

That white, green and fatty parcel,
Whose steam is never fresh…

At the end of the poem, she repeats to me, “He won’t get his hands on that one.”

Clearly, he won’t get his hands on that one.

as if, for a fleeting moment, she had managed to break free from tragedy.

I would have preferred not to choose

The interpreter is looking at me because he doesn’t know whether he must translate what has just been said. Hossain is a twenty-four-year-old father who doesn’t understand why he should stay with his child since his wife is there to look after him. As the others, he has fled and tries to live here in Cox’s Bazar under this makeshift tent strapped to bamboo pegs.

Despite humanitarian aid, the Rohingyas’ situation has not really evolved, and Hossain is nervous.
The interpreter resumes his translation: “I would have preferred not to choose. If I had known, I never would have done this. I would not have chosen to get her pregnant. She shouldn’t have kept the child.”
I ask the interpreter to tell him that I’m not here to judge him but to offer him a way to explore the emotions he’s experiencing through drama-therapy.
“Now is not the time for drama. How is drama going to help me find a solution?” he says, rolling his eyes. He seems exasperated.

I suggest we perform a breathing technique called “the sniper’s breathing.” He listens to me, suddenly showing interest.
“Sniper?” he asks.
I smile, “Yes, snipers do this to calm down and enter a state of great focus. Try and you’ll see. Close your eyes.”
I teach him this deep, abdominal breathing, taking in the air for four seconds, holding your breath for another four, and then breathing out for eight seconds. I see his puny body carrying it out. Then, after three times, I tell him he’s free to open his eyes.

He has calmed down; his chest isn’texpanding as much and his eyes have narrowed.
“Now, let’s play,” I say. He raises his eyebrow. “You’re going to be your pregnant wife and you’re going to tell me what you think of Hossain.”
He laughs and sits immediately, pretending to cover himself with something.
“What are you doing?” I ask.
He tells me that his wife always wraps herself in a coat to protect her child from the damp atmosphere. This delineation brought by the coat is symbolic, but it will eventually help him realize, while impersonating her, how difficult it is to be a mother. And when the role play ends, he will agree to try to stay by her side.

All the faces in the world

I’m on the phone with Sabba and I ask her if she wants us to start working together using art.
In precarious English, she tells me that yes, she does: “I want to become other, different roles, different faces. I’d like to be all the faces in the world today.”

She lives in the small town of Charikar where she hasn’t had the opportunity to go to school for over a month now. She listens to the radio fervently because it’s her only way to stay connected with the world and to catch educational broadcasts. I suggest we do a little focusing exercise by describing her radio set.
“It is small, rectangular, black.”
I encourage her to speak in a louder voice and dare her to be more confident.

And she follows up.
“The radio set has buttons to choose the frequencies.”
I now ask her to insist on some words, which she does willingly.
“This radio is BEAUTIFUL, POWERFUL, and MINE.”
This last word comes with a bang, and I can hear the pride that emanates from it.

I tell her what we will do next: “Now Sabba, try to become this radio set and to speak out about what you’re going through on a daily basis and how you’re here to comfort Sabba.”
Silence. Absorption of the information, then an imaginative effort. There’s a dilemma in the mind of this fourteen-year-old girl. I can hear her questioning herself, “How am I supposed to do this, I, who don’t have a professor anymore, to know if I’m following the instructions correctly?” And then she lets go, a breeze of courage ushers in the role play. 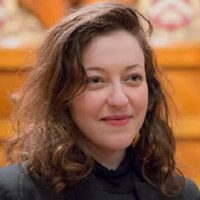 Guila was appointed UNESCO Artist for Peace in January 2012, in light of her commitment to promoting and defending human rights through art. She has taught at Sciences Po, Harvard University, Boston and Oxford Universities, University of Geneva, and the St. Petersburg Conservatory, amongst others.