GOPI KALLAYIL is a successful brand marketing executive in one of the largest global companies in the world. Yet it took a group of very ordinary hard-working women to show him how to live a really fulfilling life.

About 7.2 billion people make up our human family. Half of them live on $3 a day, less than what I pay for one cup of gourmet coffee. Several of these people live in my home village in India, Chittilancheri. My parents both grew up in Chittilancheri without electricity, running water or a college education. In one generation, the family’s fortunes shifted. My parents worked hard and created the opportunity for their four children to earn advanced degrees. My parents were ordinary people.

Later in life, I learned the extraordinary impact that ordinary people can have yet again, this time from Oseola McCarty. Former President of the United States of America, Bill Clinton, had come to Google to speak, and had given out copies of his book, Giving: How Each of Us Can Change the World. When I read that Oseola McCarty had created her own scholarship at the University of Southern Mississippi, I thought, “Surely she must be a very wealthy woman.” Well, Oseola dropped out of school when she was twelve to care for her sick aunt, and for the next seventy-five years the only job she had was washing and ironing other people’s clothes.

About 7.2 billion people make up our human family.
Half of them live on $3 a day,
less than what I pay for
one cup of gourmet coffee.

She saved her modest income in the bank, and when she turned eighty-seven she asked her bank manager how much money she had in her account. He answered, “Three hundred thousand dollars.” I imagine she must have said something like, “Son, there are no shopping malls on the way to heaven. I want to create a scholarship so that girls from poor families can go to college.”

When news of Oseola’s decision was made public, local leaders funded an endowment in her honour, increasing her gift’s reach still more. Before she died, four years later, the University of Southern Mississippi’s most famous donor received acclaim and honour, including the Presidential Citizens Medal — the highest civilian award of the United States — and honorary doctorates from the University of Southern Mississippi and Harvard. Oseola McCarty was an ordinary person, and her resources at the outset were certainly limited. Yet she made an extraordinary impact on the world.

Have you ever wondered if you could make an impact like that on others? I did, sitting in a coffee shop. The barista yelled out, “Gopi, your grande caramel cinnamon chocolate Frappuccino is ready. And it is fat-free.” I knew that only the fat was ‘free’, and it struck me that the drink was more abundant than anything many of the people I knew back in Chittilancheri would enjoy that entire day.

“Can I, an ordinary person with limited resources,
really make an extraordinary
impact on someone else’s life?”
Yes, you can, starting today.

So I wondered, “Could I sacrifice a few cups of coffee and make a big impact?” I found my answer in Kiva, a San Francisco–based organisation that allows ordinary people, like most of us, to give microloans to women in the Third World to start small businesses.

That same day, I made my first loan online, for the princely sum of $25. The entrepreneur who received it was Ngô Thi Chung, a 54-year-old woman living in Trung Giã village, Vietnam, who was starting a farm supplies business. She needed a loan of $1,200, and I wondered how my $25 could help. But never underestimate the power of people working together! In four hours, several others had made modest loans of their own, and she had her $1,200. Next month, I gave another loan to Esther Laboso, a 46-year-old widow with five children living in Kericho, Kenya, who was starting a grain store. The following month it was a fisherwoman in Peru, and then a tailor in Pakistan. I was hooked. This was much better than a grande caramel cinnamon chocolate Frappuccino.

Recently, I connected with friends from high school. The lovely Lakshmi, voted most likely to succeed in our class, asked, “Gopi, where are you these days? What are you doing?” And I, who was voted most likely to join the circus, replied, “I am an international banker. I finance entrepreneurs around the world.”

Perhaps you are inspired by these stories, but still skeptical that this truth could ever apply to you. “Can I, an ordinary person with limited resources, really make an extraordinary impact on someone else’s life?” Yes, you can, starting today. I learned this from my parents, from Oseola McCarty, and through my work with Esther Laboso and Ngô Thi Chung. As Clinton says in his book, “We all have the capacity to do great things,” and we can do it with whatever resources we have on hand. Ordinary people can make an extraordinary impact.

EXCERPT ADAPTED FROM THE INTERNET TO THE INNER-NET:
FIVE WAYS TO RESET YOUR CONNECTION AND LIVE A CONSCIOUS LIFE,
AVAILABLE WHERE BOOKS ARE SOLD 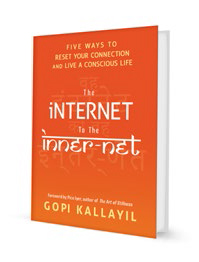 Gopi Kallayil is the Chief Evangelist, Brand Marketing at Google. An avid yoga practitioner, triathlete, global traveler, and Burning Man devotee, he has spoken at TEDx, Yoga Journal LIVE!, and Wisdom 2.0. Gopi’s recent book, The Internet to the Inner-net, is available in bookstores and online.