ALANDA GREENE continues with her experiences of weeding her garden and her inner garden of tendencies and character traits, and shares how the resulting inner reflection promotes beneficial growth.

I value daily written reflection greatly, the process of giving time to look over the day and consider my actions, words and thoughts. I know this is essential to maintaining awareness of what I am doing, developing my ability to see into my life, to catch where I am missing clues, not listening. I know the value of it and still there are times I avoid it. Too busy or forgetful or too tired; I find excuses. And I find ways to counter them. Sometimes. It’s an obstacle. It’s human. I don’t need to get into the drama of how flawed I am.

I can trace this approach of excuse making and find it turns up in many places, the way chickweed’s filamentous strands wind through so many areas of the garden. I can dissipate my energy by getting dragged down in self-recrimination, as if I’m the only human around that makes excuses, in embarrassment that I do this when I know better, in wanting to avoid this recognition as if it will appear like a flashing sign attached to my forehead and all the world will read: excuse-maker. Or procrastinator.

I don’t particularly like meeting this aspect in myself because it doesn’t fit with my efforts to be competent, capable and reliable. In many areas, these are good descriptors of my actions. But not the whole story. Procrastination turns up in the places on the edge of my capabilities, the way chickweed concentrates at the edges of some garden beds, where I am more likely to overlook it.

I follow the strands of chickweed that radiate from the root, twisting and spreading through clumps of lettuce, moving far away from where it emerges from the soil. In a similar way, I examine the irritation that arises in me. Maybe it’s about impatiently voiced words directed at me, or what I deem a petty or inconsiderate action.

It can stay that way, as a reaction to someone else’s wrong, or I can follow it as it twists to reveal my unmet expectations, concepts about how things are supposed to be. This then winds further into ideas of how I am supposed to be and am not, what is required to be worthwhile, and what is required to be worthy. This ends up a long way from the annoyance that began this examination, just as the chickweed’s ground source, where I can finally get hold of the root, is a good distance from where I noticed its leaves poking between carrot fronds.

I often find, when tracking to the source of a behavior
I wish to transform, that it is located somewhere else than
what it first appears to be. And often it leads me to concepts
about self-worth and being good enough:
good enough to live up to my ideas of how
I have to be in order to be acceptable.
To whom? To what? There’s a whole network of underground
root systems in these weeds, in me, and in the garden.

When I try to pull it, it often breaks off, a knowing feeling in my fingers that tells me it is underground for a while but will emerge again. And I’ll try again to get the whole thing. I often find, when tracking to the source of a behavior I wish to transform, that it is located somewhere else than what it first appears to be. And often it leads me to concepts about self-worth and being good enough: good enough to live up to my ideas of how I have to be in order to be acceptable. To whom? To what? There’s a whole network of underground root systems in these weeds, in me, and in the garden. 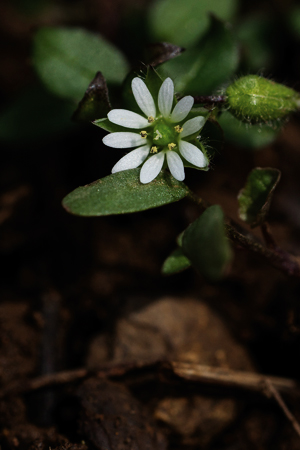 Chickweed is actually a plant whose leaves and stems are healthy for us. It makes a nutritious tea, is helpful in cooling inflammation, promotes weight loss and is an effective spring tonic to build blood. It just isn’t helpful in the vegetable growing areas. Neither are the many concepts and ideas that I was taught at home, at school, and in the school playground. They may have once been helpful ideas about ways of being, but they twisted into the wrong places. I know I have to gently identify their source and make my best efforts to eradicate them. And when they turn up again, I make efforts again, without any self-condemnation for finding this fault active once more, this behavior that I thought was gone.

When chickweed turns up again and again it’s the nature of the plant, so I don’t feel that there is something wrong. My work is to remove it where it causes problems. I don’t really expect chickweed to be gone, given its nature to thrive, and so it’s easy to accept as just the work of gardening. There is no drama in finding it and removing it. Similarly, energy doesn’t need to be wasted when I recognize tendencies that I thought were gone appearing again. Just do what needs doing. Weed what needs weeding.

Rumi said, “Out beyond your ideas of right and wrong, there is a field. I’ll meet you there.” Some have interpreted this as meaning that right and wrong are just human constructs to control societies and people; that it doesn’t matter what we do or don’t do, as long as we don’t label it. I don’t think this is correct. Right action matters. But getting caught in being right or being wrong limits my growth. Weeds aren’t wrong, but they have to go from the vegetable bed, because they choke growth or deny the plants I have nurtured their chance to flourish. There are characteristics that I wish to strengthen and support, to develop the potential of this life. Therefore, I need to identify and remove what stands in the way of that growth and unfolding. It’s not right or wrong. It’s about what I want in my life. What I want my garden to grow.

One of the techniques I have learned for finding the root of the chickweed is to pull on the branch that I find, not enough to break it but enough to feel the tautness on the strand. Then I feel for that resistance among the other plants and follow it to the soil, then try to extract the root. It’s much the same when trying to follow a trait to its source in my own being: I notice where my resistance is. That’s the clue. And, if I follow where this resistance leads, it will reveal those hidden aspects of the harder-to-find sources of the visible behavior.

That’s the clue. And, if I follow
where this resistance leads,
it will reveal those hidden aspects of the
harder-to-find sources of the visible behavior.

When I keep tracking the webs of chickweed stem and foliage, I get closer to its source, often a long way and in a different direction from where I anticipated finding it. When I track a particular tendency, habit, characteristic, I also often find it in a place different from where I first thought it was.

For example, irritation with what another said turns out to be rooted in my avoidance of speaking up and expressing clearly my own thoughts and feelings. Especially feelings in the moment. It’s a family, cultural trait and has its positive aspect, because from experience I’ve learned to avoid speaking out when it’s my anger, irritation or frustration that becomes the message. Sort of like trying to rip out the clump of chickweed in a forceful grab and pull. It does a lot of damage to the adjoining plants or flowers. But tracking carefully and speaking with clarity about my position often dissipates my annoyance, regardless of what the other person has said. The issue is not quite what I first thought. The chickweed is never quite where it first appears.

Except when it’s very small. That’s the best time to catch and remove it. It’s the easiest to avoid, because it’s so little and easily put off or overlooked. It is so easy to leave these small things that niggle at me, until they aren’t small anymore and then require a great deal more effort.

Tracking to the source leads me to the roots, which spread beneath the soil in a web that mirrors the above ground branching. The reward in persisting with this weed removal in myself is that it invariably leads me to the ground of my being. I find myself centered in my heart, recognizing the big picture of my garden life, the ongoing process and cycling, and a peaceful, willing acceptance of the role I play in this process. It’s not my garden and not my life. Both of them are expressions of one life. The experience, over and over, of that perception and feeling is the work of gardening.