ANANYA PATEL shares her experience of the Gigatonne Challenge, and how it has helped her learn about community building and teamwork, with ELIZABETH DENLEY.

Q: Ananya, tell us about yourself and what you’re doing.

AP: I am a graphic designer and illustrator. I’ve also co-founded a climate action group in Vadodara, India, called the Vadaavaran Collective. We started as a youth-led climate action collective in 2020, in the middle of the pandemic, as a lot of us were back home with some time on our hands. We signed up to the Gigatonne Challenge run by Complexity University. This global community supports and trains people around the world to tackle complex global challenges, including climate change.

The Gigatonne Challenge helps teams around the world build capacity to reduce carbon and greenhouse gas emissions. You start with a small target and increase your target as your team grows and becomes stronger. The goal is for different teams everywhere to contribute to the global movement to reduce greenhouse gas emissions, create green jobs, and build resilient communities.

Q: What sort of projects are you working on?

AP: We started with composting for sustainable waste management. There aren’t any waste segregation policies in Vadodara, so a lot of waste goes into landfill, which can be a health hazard. As young people who didn’t have much experience in the climate space, but who shared a deep concern and who wanted to impact our community, we started with food waste to start building the muscle for tackling this complex challenge.

We began working with small residential communities, helping them set up composting systems locally. And that has evolved. Initially we were collecting waste in our personal vehicles, composting, blogging, designing bins with a logo, etc. Then gradually we were at the third level of the Gigatonne Challenge, trying to abate 10 tonnes of carbon or greenhouse gas emissions per month, for three months, and we received some funding to do this.

We approached a couple of low-income communities, low-cost housing residents in Vadodara, and a self-help group of women with a certain level of literacy and education. They were trained by the government to carry out public health awareness, AIDS awareness, and other campaigns at the community level. They had a considerable impact and influence in their community, so we asked if they would be willing to learn how to compost and manage waste. We would train them, we would employ them, and we would help them set up a livelihood-generating model so they could carry this forward. That’s where things started to make sense for our group: something that might work for the future, something we could replicate.

Q: You’ve talked about a lot of decisions. Who made those decisions? And how did you make them?

AP: We were conscious of having a structure and organization where everyone had a voice. There was a core team of five or six of us, and a wider volunteer and community network. We communicate dour proposals within the network, and asked, “Would you like to have an active role in making this happen and taking these decisions?” Those who did joined the team.

The team of five or six of us steer edit forward, while people in the wider network were happy to lend their time and go with our decisions. In our team meetings, we heard from each person, what leads they had pursued, what insights they had, and what next steps we could take. And then the team discussed the best use of our time, resources, and energy.

It was important for each team member to have a role and a responsibility, and everyone had an equally important role. If any one needed support, we offered it. Or, if anyone felt overwhelmed by their tasks, help was there to prioritize.

It was important for each team member
to have a role and a responsibility, and
everyone had an equally important role.

Q: So you worked together as a team without one person leading.

AP: Yes. The Gigatonne Challenge has a certain structure of targets, reporting, and documentation to record the data and tell the story accurately. Some team members were good at working with data, while some were good with the community, talking to people and connecting with them. We tried to find a balance between both those things, and tried to keep the essence of what we were doing at the heart of it, while keeping an eye on our framework and what we needed to do.

Q: How did the composting project go?

AP: I think it was successful. The women produced a lot of compost, which they then started to sell as an additional source of income. We took them to the Maker Fest, which happens in Vadodara once a year. We tried to draw out these little opportunities over the course of the year, and get these women to talk about their story. They were given a bit of training from the government and from other organizations to sustain their business, make business decisions, and become financially more stable.

They faced a lot of community challenges, and a lot of compost was destroyed in the process. But through all that, these women kept going. They kept collecting waste, they kept talking to people. The lady who led the group was a good spokesperson. We tried to highlight her voice where we could.

We were then approached by other self-help groups around the city, wanting to do something similar, because they saw it was bringing value to this particular group.

I’m about to start a project with a bit more structure – six groups in six different localities. We’ve got another round of funding from the Gigatonne Challenge and we have designed an action-learning program where we gather the women, along with our volunteers who will be working with them, and our mentors who give a few hours a week to help these groups design their systems.

It is an equal education space, and a really lovely environment to have these conversations. We have designed a three-month training program on waste collection, composting, maintaining compost, basic planting, and gardening. Our hope is that we can guide these women to work in their localities – where can they find sources of waste, where can they set up composters, etc.? Our volunteers and mentors will help them make sense of the information, put it into a system, and support them to set up livelihood generation hubs around Vadodara. We call them “Waste to Wealth” hubs.

Q: And you’re also working with Kenyans. Tell us about that.

AP: In Vadodara, I gradually took on more of a leadership role, coordinating the different arms of the team. I found it very fulfilling, and was able to use a lot of my skillsets and interests in different ways. So I was asked by the Gigatonne Challenge at Complexity University to start supporting teams in other parts of the world, and was then introduced to a team in Bungoma County, Kenya.

It is a youth visionary network that has been operational since 2018.They wanted a way for their work to have an action-oriented tangible impact, which is why they signed up to the Gigatonne Challenge. They are farmers in their 20s and 30s, who are very passionate about improving farming processes, livelihoods, and the quality of crop production in their area. I’ve been working with them for the past 12 weeks and they have successfully moved from level1 of the Gigatonne Challenge to level 3.

Q: What does that mean?

AP: The level refers to targets. A level 1 team has just been introduced to the challenge. They are getting a sense of how to take an action-oriented approach toward climate crisis. The team is put through a two-week program where they are guided by experienced faculty and coaches. I was a coach for this team. And their goal for the two weeks was to set up a system that abated one tonne of carbon or greenhouse gas emissions within the two weeks. It had to be measured in accordance with the climate science.

In Kenya, the team found big market centers where farmers and other vendors sold their produce every day. There was a huge source of waste that was being dumped or taken to landfill, so they would collect it by handcart, bring it to their farms, and create compost.

AP: At this stage we’re trying to have a much more structured and intentional way of leading teams through. Vadodara was one of the first teams to take up the Gigatonne Challenge, and when we started everyone was still figuring it out. It’s quite a new approach, completely based on action, in accordance with the science, and how we divide the work among everyone in the world. 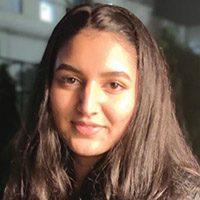 Ananya is a designer and illustrator who enjoys finding dynamic ways to tell stories. She works on projects with social impact, and runs a youth collective bringing innovative design approaches to climate action and gender equality.