Convergence in the land of origins

Highlights from REVEREND DEBORAH MOLDOW’s account of the U Day Interfaith gathering in Ethiopia.

To ignite a Global Fire of One Love, first you need a powerful spark! The flame was lit in February 2018 in Ethiopia, the Land of Origins, by 65 cultural, spiritual, religious and musical ambassadors from around the world who gathered for a ‘Convergence of Fire’.

Unity Earth, in partnership with the United Religions Initiative, the Inter-Religious Council of Ethiopia and the World Peace Prayer Society, brought together the indigenous peoples of Australia, North and Central America; Buddhist monks from Thailand; Sikhs, Baha’is, Sufis and Hindus from India; and Jews, Christians and Muslims; all standing for unity, peace and compassion. January 30 to February 7, 2018, was World Interfaith Harmony Week. Highlights of the 7-day U Day festival included visiting sacred sites in Lalibela and Shashamane, a ‘Convergence of Fire’ torch-lighting ceremony, and an impressive event at the African Union. The mission  of the U Day gatherings is to bring people into joyful harmony through interfaith understanding and the common language of music.

The group journeyed to the UNESCO World Heritage site at Lalibela, and were warmly welcomed by the priests in an ancient, moving ceremony. They visited the extraordinary 13th century churches carved into stone, offering prayers in this special atmosphere infused with deep faith. Mr Qumelachew Muluneh Taye of the Inter-Religious Council of Ethiopia, observed: “You have done here a very historical work. It was the first time in the history of our country that many faith-based organizations speak together in one language according to their religion.”

This journey of the heart demonstrated
beyond any doubt that when people of
goodwill gather together with the joy
and conviction of their individual
religious and spiritual traditions,
they will produce a ‘Convergence of Fire’,
igniting a Global Fire of One Love.

The Convergence of Fire ceremony was held in Lalibela on a hilltop over 2,500 meters high on January 31, which offered both a super moon and a lunar eclipse. Indigenous leaders from Mexico, Canada and Australia joined together to build a sacred fire and lead a Four Directions ceremony. This was followed by the Convergence of Fire, after which three torches were lit: the Torch of  Compassion, which was used worldwide in the Compassion Games; the Torch of Peace, which was passed around the world in the First Earth Run in 1986 in partnership with the United Nations Children’s Fund; and the Lamp of Unity from Chiang Mai, Thailand, where U Day first took place in 2012.

The African Union event, organized in partnership with Ambassador Mussie Hailu, African Regional Director of the United Religions Initiative, featured the president of Ethiopia, Dr Mulatu Teshome, the Patriarch of the Ethiopian Orthodox Church, leaders of the Inter-Religious Council of Ethiopia, and other local dignitaries, along with the U Day delegates.

All spoke of the value of harmony among people of diverse religions and the significance of the Golden Rule in demonstrating the common values across religious divides. President Teshome mentioned that the General Assembly Resolution establishing World Interfaith Harmony Week is based on the shared principles of love of God and love of neighbor. He noted, “Ethiopia is a diverse nation well-known as a land of peace and religious tolerance, with a longstanding heritage of peaceful co-existence.” Then the Unity Earth guests delivered speeches on their great diversity. 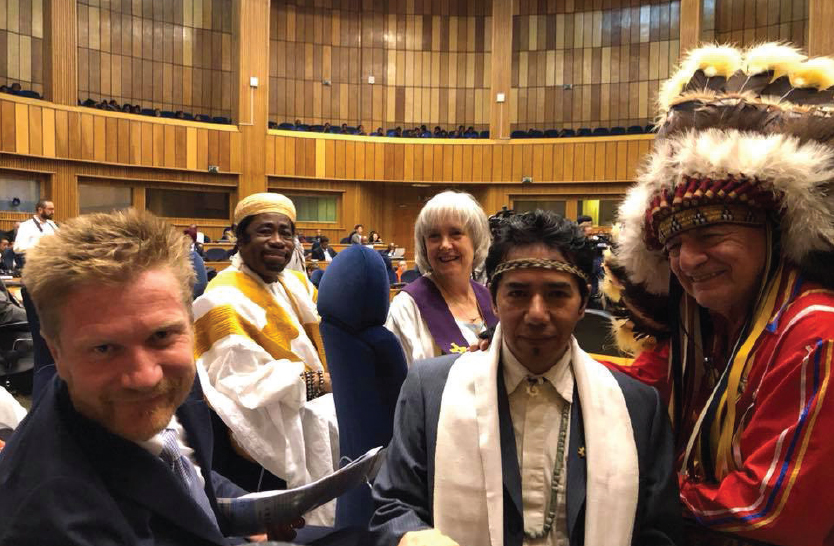 The Unity Earth ‘Keeper of the Flame Award’ was presented to Mussie Hailu for his outstanding contribution in the fields of Interfaith Dialogue, Peace Building and Social Inclusion. This was followed by a flag ceremony with fifty Ethiopian children raising the flags of all the nations of the world with the prayer, “May peace prevail on Earth”. This beautiful and moving ceremony  concluded with the children and delegates holding the flags of the continent of Africa, followed by the Unity Earth indigenous representatives bearing a special flag of the indigenous nations.

The U Nite concert on February 3 brought together musicians of many different national cultures and faith traditions at the Villa Verde in Addis Ababa. The Unity Earth group celebrated its diversity in musical praise with a dancing rabbi, a drumming Sufi, and everyone united through the joy of music. The performers also took part in a one-hour radio interview on the Ethiopia Broadcast Corporation to promote the U Day Festival.

Simultaneously, an online live global meditation led by Dr David Nicol of the Gaiafield Network attracted hundreds of participants across the globe. People of goodwill around the planet were invited to help ‘light’ the Global Torch of One Love with their collective presence and prayers for planetary healing (http://udayfestival.org/convergence-of-fire). This torch is intended to carry the spiritual energy of many global healing initiatives, representing millions of people, and will be lit at the subsequent U Day festivals planned between now and 2022.

The culmination of the U Day Festival was a voyage south to Shashamane, the territory originally set aside by Emperor Haile Selassie for the practitioners of the Rastafari religious community that gifted the world with Jamaican Reggae music.

Shashamane leaders welcomed the U Day delegates and brought them to see community improvement projects, including a school under construction. Everyone gathered at the Temple of the Twelve Tribes of Israel, where a ceremony of ‘uniting the tribes’ was led by members of diverse faiths in demonstration of a world of interfaith harmony to come, where every religion is respected and all peoples are honored.

On the night of February 6, an outdoor Earthstrong concert was held as a fundraising event and the U Day delegates returned to Addis This journey of the heart demonstrated beyond any doubt that when people of goodwill gather together with the joy and conviction of their individual religious and spiritual traditions, they will produce a ‘Convergence of Fire’, igniting a Global Fire of One Love.

Ababa as a community bonded in a love that transcended their deep commitment to their own religions, traditions and spiritual paths. This journey of the heart demonstrated beyond any doubt that when people of goodwill gather together with the joy and conviction of their individual religious and spiritual traditions, they will produce a ‘Convergence of Fire’, igniting a Global Fire of One Love.

Unity Earth will continue its efforts to bring people together in glorious diversity through faith and music with upcoming U Day festivals in India and Jerusalem, plus a Road to 2020 caravan across the United States to culminate in a major concert in New York City on the International Day of Peace, September 21, 2020.

The kitchen of love