How do you handle it when others don’t agree with you or want to do things differently, especially at work? ELIZABETH DENLEY explores the need for different perspectives, and shares some thoughts on how to integrate diverse views in decision-making in the work place.

Thank God for diversity! Many of us don’t like the fact that other people have different points of view and ways of doing things, and it often causes tension and conflict at work, but imagine if we all had the same perspective! This story from the mythical Sufi master, Mulla Nasruddin, gives us a hint:

One day, Mulla Nasruddin said to his wife, “I have discovered how to play the violin perfectly. Summon all our near and dear ones for a concert.” Everyone was invited and there was much excitement as they all waited expectantly for the most beautiful music from the saintly Mulla.

He lifted the violin to his chin, with a dramatic pause before starting to play. One note came from his instrument – for sure it was beautifully played, but it was only one note. Then he paused. Again he drew the bow across the strings, and again the same beautifully-played note resonated throughout the room. 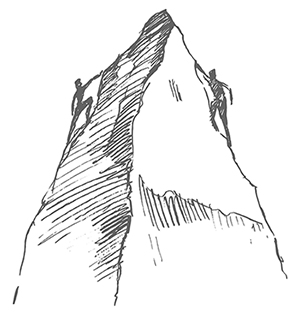 People started fidgeting and looking at each other with surprised and confused looks. What was the Mulla up to? His wife turned red with embarrassment, as people started smiling and giggling. She had expected such a wonderful performance, and now this.

Finally she mustered the courage to ask, “Husband, why are you only playing one note, instead of playing beautiful music like other musicians do?”
“Well,” replied the Mulla, “Other musicians are still searching for the perfect note. I have found it!”

While at work, how often do you think, “The perfect way of solving that challenge or problem is so obvious! Why is he doing it a different way?” or “She is so inefficient in her way of doing that,” or “They are not doing it right!” without exploring the different perspectives they might have on the issue? Are we able to see a broader perspective or are we limited in our worldview.

Here is an interesting analogy that I learnt from Daaji one morning. He drew a picture of a mountain on a piece of paper, with two people climbing up the mountain, each on opposite sides. He said, “You see, this person climbing up this slope can only see her side of the mountain, and that colors her perception. This person climbing up the other side of the mountain can only see his side, and may have the opposite perspective.” The two sides could be any duality – he mentioned science versus religion, but the concept holds equally well for fast execution versus a quality product, company productivity versus employee well-being, profit versus environmental sustainability, duty versus job satisfaction … and the list goes on.

Daaji continued: “Only when a person reaches the top of the mountain can he or she have a 360-degree vision of the whole and see all sides of any issue.” This principle holds true for all relationships and communication in the workplace. It is also the basis of good teamwork. Mutual trust and respect can only underpin any company ethic when the leaders and managers understand this and allow it to happen. It also means that employees need the space to think for themselves and contribute their ideas to the whole, otherwise all of them will only be climbing up the one beaten track to the top, following in the footsteps of the current leader.

I think everyone would agree
with the need for diversity,
so the issue is not with the
concept, but in how we
make use of this concept
at work, especially when
there is polarization between
people who are working
together, leading to conflict
and disharmony.

That doesn’t mean chaos and anarchy, disobedience and lack of structure at work – not at all. Again, two different perspectives don’t need to be opposite; they can be integrated. The problem lies in the fact that most of the time we think in dualities, of this or that, instead of this and that.

Look at Nature. Is there one single note in Nature? Is every oak tree exactly the same, or every butterfly? What would a garden be like with only one type of plant, all exactly the same? Should every human being look the same?

Should there only be one human culture, with everyone following the same style of living: same clothes, same houses, same cars, same hairstyles, designer this, designer that? It would be like the movie, The Stepford Wives, or Aldous Huxley’s A Brave New World. There is an English proverb, “Variety is the spice of life.” I think everyone would agree with the need for diversity, so the issue is not with the concept, but in how we make use of this concept at work, especially when there is polarization between people who are working together, leading to conflict and disharmony.

One of my dearest colleagues, with whom I work on many projects, has very similar tastes and opinions to me. We almost always agree and that creates a problem, because our views are too similar. So often when we are working together, we will bring in another person – someone we know will have a very different perspective. It adds richness, challenges us to expand our perspectives and perception, and always results in a better outcome.

It also means that we don’t end up like the Bandar-log in Rudyard Kilping’s The Jungle Book; the monkeys who are always blowing their own trumpet with, “We are great. We are free. We are wonderful. We are the most wonderful people in all the jungle! We all say so, and so it must be true.”

How to manage diverse opinions and come to a collective conclusion? That is the difficult question for many managers. The answers to that question apply to any relationships, whether at work, between spouses, parents and children, friends or strangers on a bus or in different cars in heavy traffic. Here are a few ideas: 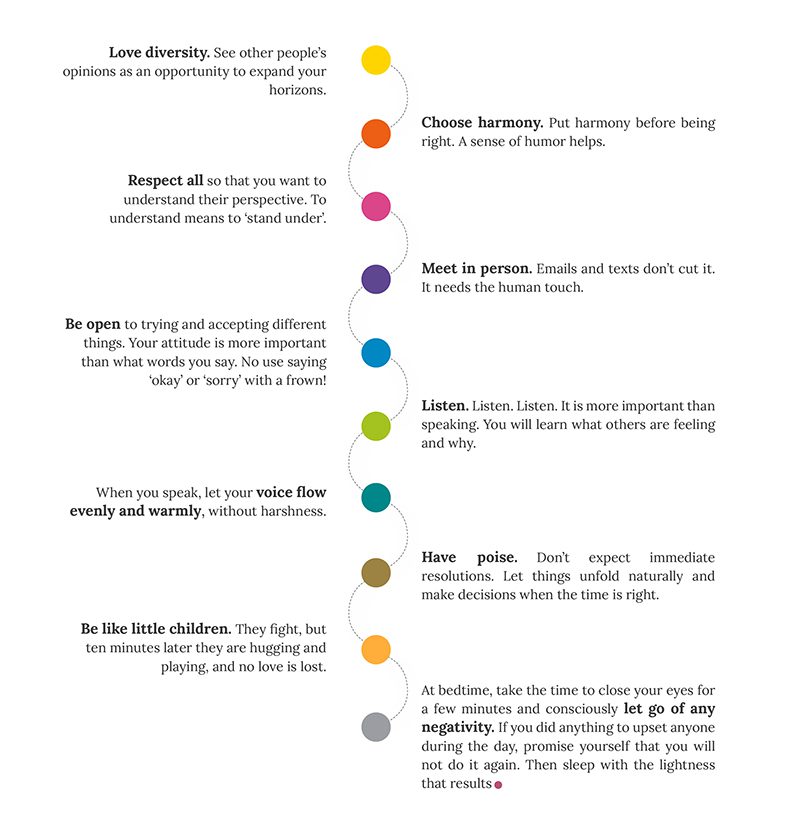 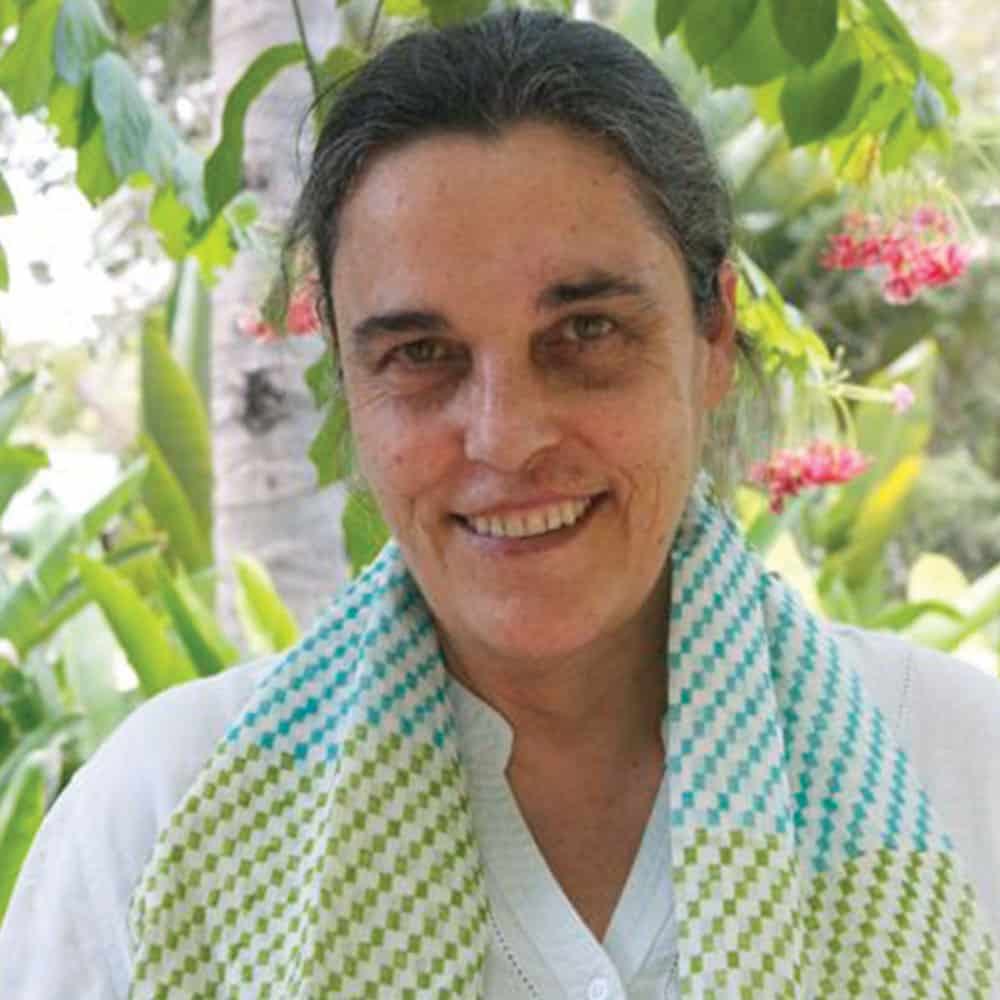 Elizabeth is originally from Australia, and is the founding editor of Heartfulness Magazine. She loves meditating, writing, singing, playing the piano, gardening, thinking, spending time with her two grown up children, and life in general. She is active in researching and publishing the writings of the Heartfulness masters of the 20th and 21st centuries. She... Read more