In the previous articles, RAVI VENKATESAN outlined aspects of the “inner state” that we want to fine tune to become Heartful Innovators. He covered ways to overcome barriers to innovation like stress and fear, and also enablers of innovation like imagination and courage. To be effective innovators, we need three skills: coming up with unique ideas, articulating them well, and influencing others to rally around the idea. In this article he looks at the best ways to articulate ideas and influence others to rally around the ideas.

Some of the smartest people I know struggle to express their ideas. They have clarity of thought, can quickly identify solutions to problems, but are poor at expressing themselves. Often, they are frustrated that no one seems to listen to them, so poorer decisions are made by people who are not as smart but speak with a “louder voice.” The reality is that it is not just the “louder voice” that is heard. Let’s revisit some of the concepts around the subtle bodies of Mind, Intellect, Ego and Consciousness that we have discussed; in this case, we will consider them collectively instead of individually

How to articulate ideas to others in a way that they feel heard? Let’s go through the cycle of how your listener is processing what they hear from you: If you develop the habit of always placing your ideas in a simple and logical manner, you will go through the filter of their Intellect. This is the easy part.

If you refer to something you heard earlier from them, or place your ideas in the context to conversations you’ve had with them, you will naturally go through their Ego filter. This is the hard part, but with practice it becomes second nature.

As more of your conversations “feel” positive to them, their Consciousness will shift to be open to your ideas. This is not about being devious or manipulative. Instead, it is simply following the principle that we all appreciate being listened to, and when your conversation reflects that you have listened, then your ideas are more likely to be accepted.

To encourage people to rally behind your ideas, try to create a shared vision of what they can accomplish. The three steps I recommend for a Heartful Innovator are these:

1. Tell a story to articulate the problem you are solving. For example, when pitching the idea for a bookmark you could tell the story of your favorite book that was ruined by dogears on multiple pages. This is a simple example, but it highlights the importance of storytelling.

2. Paint a picture of the future. For example, when pitching the benefit of a high-speed subway for a city with heavy traffic congestion, you might share something like, “Imagine if all our daily commuters went from the current average commute of an hour to 30 minutes. We could give them all the gift of an hour a day.” This is also like the habit, “Begin with the end in mind,” Stephen Covey describes in his famous book, The 7 Habits of Highly Effective People.

3. Express optimism in the possibility of what you are proposing. Most innovations would never happen if every idea were analyzed objectively for the probability of success. There is need for optimism, at times even irrational optimism. Optimism toward the possible achievement of challenging goals always inspires people to do more than they thought possible.

Maintain a personal influence journal over the next few weeks. Every time you share an idea with anyone at work, or even with family members, observe their reaction and assign yourself a score as follows:

Reflect on your score after a couple of weeks. You will improve your ability to articulate ideas and influence people if you apply the principles of Heartful Innovation that we’ve covered in this article. After all, what use is it if you come up with the best ideas but are not able to convince anyone to support them! 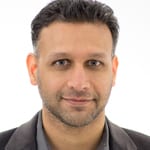 Ravi lives in Atlanta, Georgia, and is currently the Chief Technology Officer at Cantaloupe. He is also a regular public speaker and public speaking coach. He has been a Heartfulness meditator for over 20 years and is passionate about applying meditation lessons to improve workplace relationships and productivity.