FOUR ARROWS, aka DON TRENT JACOBS, Ph.D., Ed.D., is the author of numerous books, peer-reviewed articles, and chapters on applications of the Indigenous Worldview as a proven solution to our existential world problems. Former Director of Education at Oglala, Lakota College, and currently a professor of education for change at Fielding Graduate University, his academic work, spiritual life, and social/ecological justice activism have received international recognition, including a book on his work by Dr. Michael Fisher entitled Fearless Engagement of Four Arrows. In part 1 of this series, he speaks with JUDITH NELSON from the Heartfulness Institute about worldviews and complementarity.

Q: A very big welcome, Don. Can you tell us a bit about your background?

4A: I was born in St. Louis County, Missouri, USA. My mom was Irish-Cherokee, and my dad was Irish, but my Cherokee background was ignored, except once a month when mom would talk about it. Her dad had committed suicide, and it was not something to have as a positive.

I went into the Marine Corps during the Vietnam era. When I got out, I had a chip on my shoulder about the falsities of that war, and I took it out on adventures like wild-horse training and white-water rafting. I tried a river that had never been ascended before, the Rio Urique in Copper Canyon, Mexico. The canyon was 8,000 feet down, and I had a near-death experience where the river disappeared into an underground hole.

I had a vision during that experience, which brought me to studying the Indigenous worldview. It was not just the vision but also the Rarámuri people. They saved the lives of my friend and me by getting us out of the canyon.

I called that vision CAT-FAWN. CAT stands for Concentration Activated Transformation. You can think of it as self-hypnosis or spontaneous hypnosis. FAWN is Fear, Authority, Words, and Nature. The CAT was the mountain lion that led us out of the cave as the river rose from flooding; and the FAWN was one that the Tarahumara had been carrying over their shoulder. They had run it down – you may have heard of the Tarahumara as being great runners. Those two animals turned into the words “CAT-FAWN.”

I got a second doctorate with an Indigenous worldview cognate, and I was convinced from the vision and subsequent work that the changes that happened to me were about remembering our original worldview. As soon as I graduated, I was hired as Director of Education at Oglala Lakota College for the Pine Ridge Reservation. I found individuals who still held onto the old ways, and I became a Sun Dancer. One of the seven sacred ceremonies of the Lakota is the making of a relative. I was made a relative of the Medicine Horse Tiospaye, and I commenced writing about the Indigenous worldview, one that belongs to all of us, one that guided us for 99% of human history up until 8,000 years ago. That’s been my life’s passion.

Q: How did you come to have the name Four Arrows?

4A: I got the name Four Arrows during the relative-making ceremony. I did a Hanbleceya (vision quest) prior to that and had a vision of a lake with four arrows shooting from the middle of it. Each arrow went in a different direction – west, north, east, and south – and when it hit the ground it turned into an animal. When I came back, I burnt my clothes, went into the lodge, and told them my vision. I was given the name Four Arrows.

Q: Can you explain what you mean by worldview?

4A: Experts like Kotlko-Rivera essentially say that it’s a fundamental belief in our human relationship with Nature and with the supernatural. It undergirds all our beliefs and philosophies. I follow the theory of Robert Redfield, known as the father of social anthropology. Working out of the University of Chicago, he brought the German idea of Weltanschauung to the academy in a more meaningful way.

In the early ’30s he said that there are only three worldviews: The Eastern worldview, which the yogic traditions come from; the Western worldview; and the primitive worldview. Later, he decided that the Eastern one had largely been subsumed in terms of operations, governments, schooling, etc. So he said, “There are only two,” and he called one the metropolitan or civilized one, and the other the mythological or indigenous one.

He believed that the greatest tragedy to happen in human history was the destruction of the Indigenous worldview by those who colonized and operationalized the dominant worldview.

One definition I came upon on for worldview is that it’s really about how to understand the norm of opposites that exist in the world – night and day, in and out, up and down.

One definition I came upon on for worldview
is that it’s really about how to understand
the norm of opposites that exist in the world
– night and day, in and out, up and down.

Carl Jung came up with something similar when he said that the understanding of duality is an art that realizes the living rhythm that comes from finding balance between opposites.

So, I came up with a Worldview Chart based on research around forty precepts. Most of all, the cultures in the world under the dominant worldview have this anthropocentric view that humans are at the “center.” No matter how much you love animals or pets, you still operate according to you – everything is about humans. Capitalism essentially is about humans – everything else on Earth is utilitarian.

In contrast, there are the Vedic traditions (I practice Kundalini Yoga, and this is just a theory now, on my part). They have attempted to bring us back to our nature-based worldview, to an understanding of our interconnectedness, but they have done it as “postvention” instead of prevention. They say, “Well, this is what we can do from where we are,” whereas in the Indigenous worldview, as Webb shows, 78% of all pre-contact cultures were peaceful societies. They were living and maintaining their societies through ceremonies.

My students use the Worldview Chart all the time. Whenever something comes up, they look at it and ask, “Okay, what are the challenges? Why is anthropocentrism creating this problem? What would happen if we truly see, let’s say, trees as sentient, and ants and cockroaches in the bathroom as sentient? What if we take time to study, to observe, even if we have to use Google to find out what they’re all about?” “What if we really have in our minds that humans are not superior? How would that affect how we treat people of different color, of different sexual identity, of different economic class?” Pretty soon, people start to see that all these worldview precepts work together.

My students use the Worldview Chart in every class. While talking about sociological, ecological, justice issues, complexities, and problems, they go through it and say, “If we could have a sense that competition is about developing positive potential, not about winning to feel superior,” or “If we could really understand that there are spiritual energies in the world, and that experience would allow someone to do such-and-such.”

I ask people to do an exercise where they choose one thing from the dominant worldview list on the left that they are engaged with. Many individuals and groups like your own find that they resonate with something on the right-hand list – the Indigenous worldview – but I ask them to look at the list on the left, and it has really been amazing. At the Boston College of Business, one person who had never thought about the Indigenous worldview said, “Wow, I can’t believe how easy this would be to do. I can see how even though I generally believe people are good, I live in a world where human nature is seen as essentially corrupt or evil. That’s what’s operating and I buy into that. I buy into social laws as primary as opposed to the laws of Nature.”

So, people recognize that we live in systems that are essentially guiding us via the dominant worldview, and that’s why we’re in such an existential crisis. Then we look at the Indigenous worldview, and we talk about “What would happen if we had our organization operating according to a number of these principles?” So, does that help a little?

Q: Yes. In fact, I’m quite struck by the similarity between our Heartfulness system and its aims, and the Indigenous worldview that you have on the right side of the chart.

4A: I felt that when you were first talking about Heartfulness. It’s not unusual, because some of the original yogic philosophies were in sync with the Indigenous worldview. There’s one world based on Nature and Spirit, and then there’s the human-centered materialistic world that we live in, which during less than 1% of human history has destroyed life systems, happiness, and everything else. It’s a no-brainer for me, and yet there’s a lot of resistance.

A lot of my colleagues see duality as binary, because the dominant worldview is binary, and they can’t understand how playing with the two sides is not a violation of the “us-versus-them” thinking. That’s all they know, that’show it works. They don’t understand the phenomenon of complementary thinking.

So, let’s talk about the original myths of twin heroes around the world. There are always twins – two men, a man and woman, or two women – who work together. One represents the solar energy and one represents the lunar energy. All Indigenous cultures have these myths, for example, the Navajo have one called Monster Slayer and the Child Born of the Water. Monster Slayer is the solar, and the Child Born of the Water is the lunar.

They come to a monster with long arms, and Monster Slayer says, “No problem, I’m a good shot, I’m going to get him with my arrow.”
The Child Born of Water says, “O brother, his arms are so long, he’ll get that arrow and us. It’s not going to work.”
Monster Slayer says, “Well, what should we do?”
And the Child Born of Water says, “I think we should sing to him.”
So they sing to him. The monster, never having been treated that way, mellows out. The lesson is that monsters are those things in us that are our greed, our jealousy, our anger, etc.

Jump forward to the dominant worldview, where all the twin-hero stories have been changed. Romulus kills Remus, Jacob steals Esau’s birthright, and so on. Everybody knows Hercules, but nobody knows his brother, Iphicles, who was the lunar twin. We have dominated in a solar way, and we’ve made that masculine. We’ve dominated the feminine, right?

So, with this idea of complementarity, people are confused by seeing a duality and not immediately saying “Ah! This is what I’m against.” It’s a tricky business to be able to say, like the Indigenous Andeans said: It’s crazy to think that something that’s bad isn’t bad.

The trick is bringing the awareness and the solution in a harmonious way.

This interview has been brought to you with the collaboration and support of the Spirit of Humanity Forum. 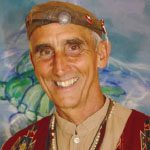 Four Arrows, aka Don Trent Jacobs, is a champion of the Indigenous Worldview, has been endorsed by some of the world’s most noted thinkers, and has received the Martin Springer Institute’s Moral Courage Award.