I have added these two vikshepas to Patanjali’s list, as they have only surfaced as serious obstacles to progress in the modern era.

FOMO is described by researchers as “the uneasy and sometimes all-consuming feeling that you’re missing out, that your peers are doing, knowing about, or in possession of more or something better than you.” It is exacerbated by the fact that we live in a world of WhatsApp, Twitter, Instagram, YouTube, and constant news on our smartphones. It is a fear that others are living a better life, and having more fun. It stems from a sense of envy, leading to a feeling of helplessness.

Advertisers are always preying on this insecurity, by inviting us to buy products that will enhance our sense of belonging – those “Can’t miss out experiences,” be it a new car, a bigger house, the latest kitchen products, the newest smartphone or the latest fashions. FOMO is not new, it has been around for centuries, but it has become more obvious since the advent of social media. The first scientific studies were done by a marketing strategist, Dr. Dan Herman, in 1996, and the acronym FOMO was coined by Patrick McGinness in 2004 in The Harbus. Since then, it has been studied more and more frequently as a modern phenomenon.

Social media are both a cause and effect of FOMO, which is characterized by a desire to be connected with what others are doing. Social media feed this vikshepa. We could even say that social media are the modern opiates of the people. They are so addictive. Unfortunately, social media post the highlights of people’s lives, so we are always comparing our own lives with the best of others. People show their best side on social media, or a sensationalist side to get attention. It is a biased view of life; it is not reality. And we compare ourselves to that, and it becomes an unfortunate competition. 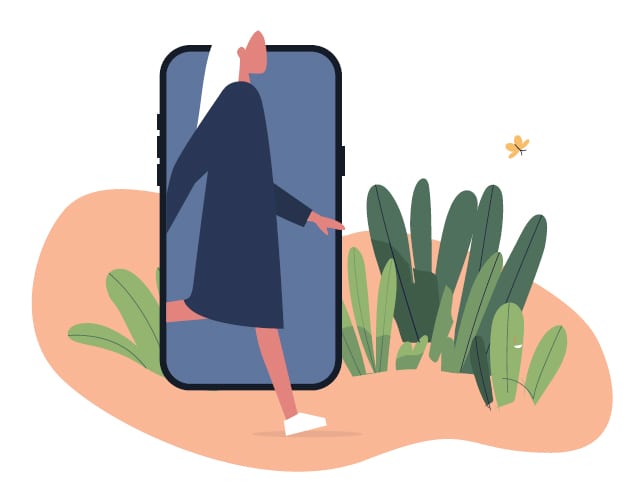 FOMO is associated with all walks of life, ages and genders, and is a very real and common feeling in today’s world, stemming from insecurity and a feeling of lack, and sometimes leading to physiological symptoms and behaviors. Many sufferers are simply overwhelmed by the amount of information needed to “keep up” with current activities and trends. FOMO is also associated with a negative effect on overall mood and life satisfaction.

Where does this lack really come from? You may blame social media, but are they really the culprits? In fact, the fundamental sense of lack is an inner lack – a lack of inner contentment, of inner connection, a feeling of not belonging. Someone who is connected with their own Source every day, every hour, every moment, is contented in their own being, irrespective of what others have or do. There is a sense of confidence and courage to live in the world without competition and comparison with others, without succumbing to peer pressure or media pressure. 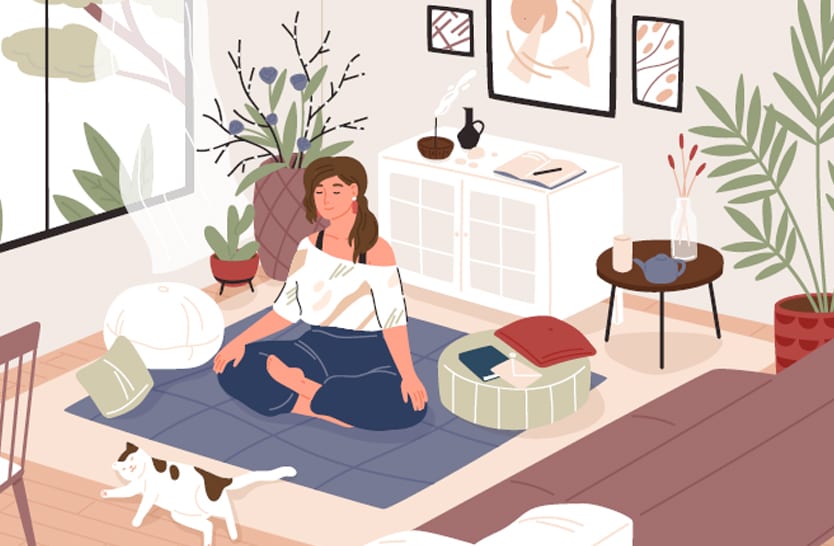 FOMO has become inextricably linked with the digital era, and digital gadgets provide their own problems. First there is the amount of time people spend watching screens instead of communicating face-to-face with others, playing sports, reading books, going for walks, or simply being in nature. The classic is when you go to a restaurant and see four people sitting at a table for dinner, all on their individual smartphones instead of talking together.

Second is the radiation associated with these gadgets. Electromagnetic technology is an integral part of our lives – Wi-Fi, the Internet, Bluetooth, mobile phones, computers, tablets, microwave ovens, medical equipment, and all the other man-made sources of electromagnetic radiation in our environment. Today we know much more about their effects. In 2011, WHO’s International Agency for Research on Cancer announced it was classifying electromagnetic fields from mobile phones and other sources as “possibly carcinogenic to humans” and advised everyone to adopt safety measures to reduce exposure.

There is now a field of research known as bioelectromagnetics and authorities in many European countries recommend that people use hands-free to decrease radiation to the head, keep mobile phones away from the body, and do not use a mobile phone in a car without an external antenna.

Our subtle body is our energetic body which has its own electromagnetic field created by the negative and positive polarity of charge. As a result, the subtle body is affected by other energy fields in the environment, for example, the build up of positive ions in the atmosphere before a thunderstorm creates restlessness, while the release of negative ions once the storm arrives brings relief.

In nature, everything is in a state of dynamic balance, with complementary energy flows switching like alternating current throughout the day. The same sort of alternating pattern is seen in the complementary sympathetic and parasympathetic currents associated with the Surya and Chandra Nadis in our bodies, where at times one predominates, then the current switches so that the other predominates. Then there are the main inflection points at sunrise and sunset, the stationary points, where the turn of the flow is more prominent, like the turning of the tide. We see these patterns of polarity at the macrocosmic and microcosmic levels, whether in the planetary movements or in particles at the atomic movement.

Our subtle body is our energetic body
which has its own electromagnetic field
created by the negative and positive polarity of charge.
As a result, the subtle body is affected by
other energy fields in the environment,
for example, the build up of positive ions
in the atmosphere before a thunderstorm
creates restlessness, while the release of
negative ions once the storm arrives brings relief.

When we add man-made EMFs to our environment, they interact with our natural EMFs. So the stronger the manmade EMF technologies in our environment, the more likely they are to affect us. Some people get headaches, rashes, nausea and nervous complaints. The effects happen first at the level of the subtle body, the energy field, and eventually filter down to the physical body.

A few years back, a group of schoolgirls in Denmark did an experiment. They were experiencing difficulty concentrating in school, and when they slept with the phone next to their head they sometimes also experienced difficulty sleeping. They took 400 watercress seeds and placed them in twelve trays: six in a room without radiation, and six in the next room with two Wi-Fi routers. The seeds were given the same amount of water and the same conditions of light. After twelve days the cress seeds next to the router did not grow so well, and some of them mutated and died.

The experiment drew international attention and scientists replicated it with controls, other experimental variables and using other plants. I have tried it using mung bean seeds in four different environments with astounding results, as follows: 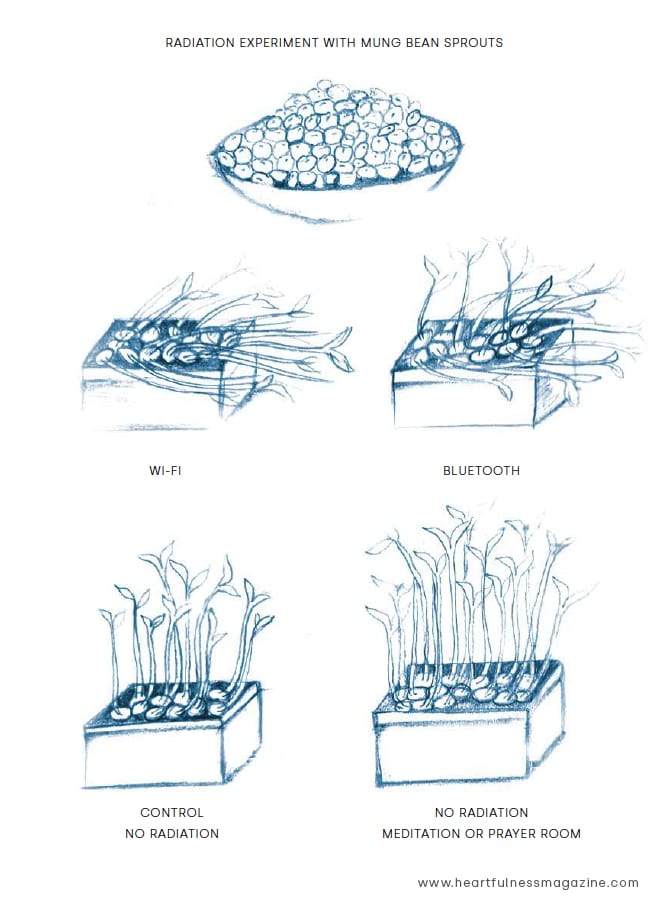 I would suggest that every child do this experiment, so they can see for themselves the effect that radiation has on living organisms. One of the Danish students said after finishing their experiment, “None of us sleep with the mobile next to the bed anymore. Either the phone is put far away, or it is put in another room. And the computer is always off.” 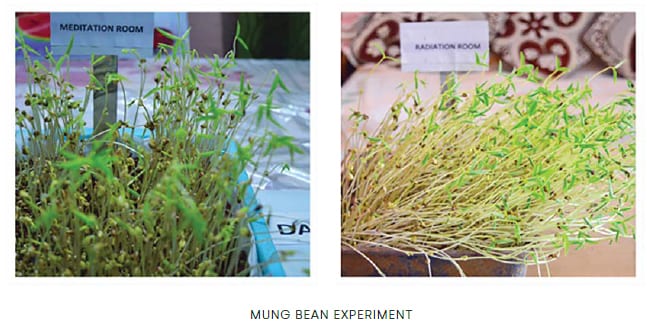 Here are a few simple things that will help to reduce this vikshepa:

Turn off Wi-Fi when it is not in use, and at night during sleep,

Keep your mobile phone in a bag, not in your pocket against your body,

Switch Bluetooth on only when needed,

Keep your phone away from your bed at night, and

Don’t give small children phones to play with.

Digital technologies have revolutionized our global network, but today many of us are dependent on them to the point of addiction. The radiation they emit is harmful to health because of its effect on our subtle bodies, our consciousness, and only time will tell the long-term effects of constant use.