There is one more vikshepa that I have added to Patanjali’s list, as it is often a crippling obstacle to progress, and indeed to every aspect of living, and that is the vikshepa of Guilt and Shame.

What types of impression dominate our lives? There can be so many, for example, worldly worries, sensuality and sexual attraction, prejudice, greed, grief, sadness, self-pity, jealousy, guilt and shame. As well as impressions formed by our thoughts and actions, we also form impressions by our inactions, creating even more guilt. These are the things that we should have done but did not do, and such things haunt us all our lives. For example, we may have hurt someone very dear to us without ever having made amends. Impressions like that are difficult to remove.

Most of the other emotions associated with the human heart have some redeeming purpose and help us on our spiritual journey when used constructively for a higher purpose, even the so-called negative emotions like anger, fear and worry. But at first glance it is hard to see much value in guilt and shame, other than that they indicate we have a conscience. Someone who feels no guilt and no shame for anything is amoral and psychopathic.

Is there a difference between guilt and shame? Guilt is a feeling that arises when we have either done something or not done something, for which we feel responsible. Psychologists explain it like this: With guilt we often want to make amends, and apologize for the hurt we have caused. Our attention is on the feelings of others, and correcting the situation. Guilt can eventually lead to socially-adaptive behavior. Shame, on the other hand, is focused inward, so that we view ourselves in the most negative light.1 Shame is the result of having transgressed the values and principles we hold dear. We are no longer authentic, because we have lost our integrity with respect to our heart’s wisdom. To overcome this we have to forgive ourselves and find ways to change the inherent patterns that caused the transgression in the first place.

Guilt can eventually lead to socially-adaptive behavior.
Shame, on the other hand, is focused inward,
so that we view ourselves in the most negative light.
Shame is the result of having transgressed
the values and principles we hold dear.
We are no longer authentic,
because we have lost our integrity
with respect to our heart’s wisdom.

When shame is the result of someone else’s behavior, as is often the case with the internalized shame that is found amongst victims of child abuse or domestic violence, the problem is even trickier, because children do not know how to deal with their feelings when the perpetrator is someone they love and rely on to protect them. They are helpless, even though they know that what has happened is wrong and against their heart’s wisdom.

Dr. Chris Germer has written, “Shame is probably the trickiest human emotion. It’s everywhere, so we barely see it. It’s also the glue that makes other emotions stick around longer than they should – fear, anger, guilt.”2

It also happens that sometimes we choose to go against our conscience, because our desires and mental justifications push us to make another choice. And until we change our thinking we will keep recycling those experiences and habits. Guilt and shame really drain our energy, pulling us further and further away from our center.

In terms of the chakras of the Heart Region, guilt and shame lodge at point D, one of the satellite points around the Heart.

They are impressions that give rise to a lot of heaviness in the heart, and they are the most difficult to clean. It is, rather, very difficult to remove impressions associated with guilt and shame. The Heartfulness Way offers a very effective practice that can be adopted as needed:

At bedtime, feel the divine presence in your heart, and repent for anything you have done wrong, even if it was unintentional. There is no recrimination in this process. While resting deep in your heart, prayerfully resolve not to do the same again. You will feel as if a burden has lifted. 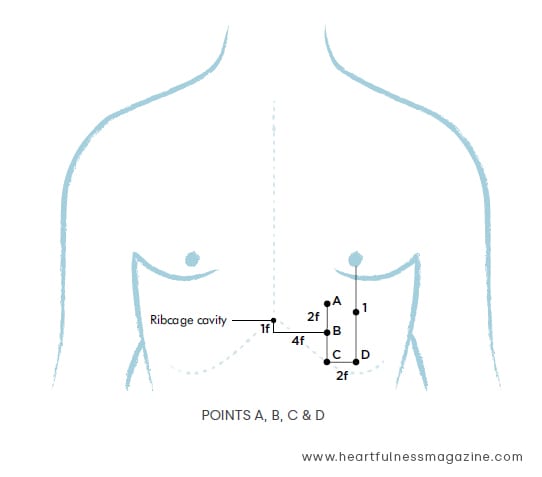 You can also present any questions and confusions to your heart right after offering prayer. There is no need to seek an answer immediately. Sometimes the answer will come by the time you wake up. Even if the answer comes in another form than words, the solution will eventually arise.

To remove guilt and shame, a commitment of a very high order is required, and cooperation at every level. For this we need self-compassion, self-acceptance and courage. We need to open up and let go. The best time to do this is before sleeping at night. When we let go of these heavy emotions at bedtime, imagine the positive effect it will have on our sleep! We do not need to remember all the things we have done or not done, because when we truly open ourselves, what has to be removed will be removed. Tears will often come. There will be many such sessions, and over time the heaviness will gradually dissolve. 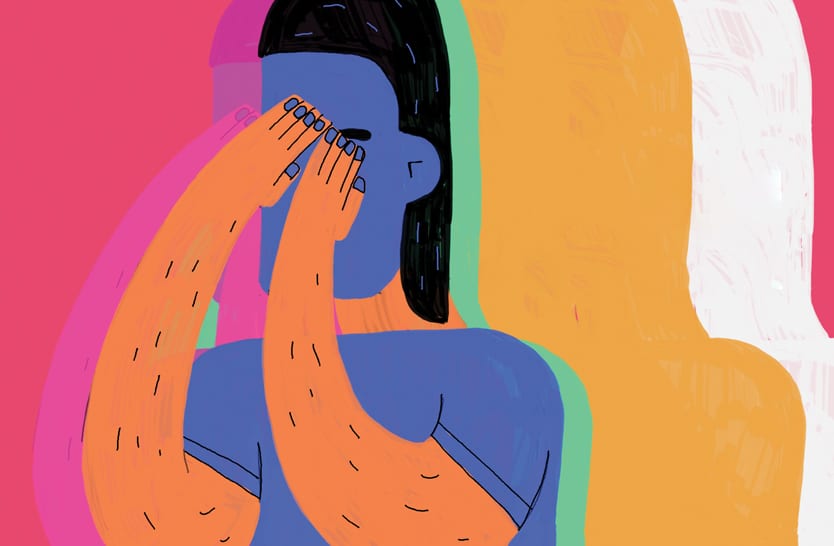 When we meditate with Transmission and practice Cleaning daily,
guilt and shame will surely surface to be removed.
They come to the surface to leave,
so there is no point struggling with them.
It helps, instead, to remain focused on
where we are headed, on our purpose.

In Heartfulness, when we meditate with Transmission and practice Cleaning daily, guilt and shame will surely surface to be removed. They come to the surface to leave, so there is no point struggling with them. It helps, instead, to remain focused on where we are headed, on our purpose. Once we understand this, it becomes much easier to cooperate. In the words of Dr. Chris Germer, “Self-compassion is the antidote for guilt and shame.”

As our system is being vacuumized, all the complexities are being pulled out. And then we are filled with lightness, and with the universal knowledge and the divine wisdom we require to lead a properly balanced life. For this purpose, the help of a Guide of caliber is beyond value.

1 Kämmerer, A., 2019. The Scientific Underpinnings and Impacts of Shame, Scientific American.  https://www.scientificamerican.com/article/the-scientific-underpinnings-and-impacts-of-shame.
2 www.chrisgermer.com