LUIGI FERRARO lives on the beautiful Isle of Capri in Italy’s Bay of Naples. He has been a Heartfulness yogi for over 45 years, and shares with us his experience of the search for a Universal Truth.

Life’s circumstances led me at a young age into a religious education for the priesthood. At the age of ten I entered a religious institute where I remained until I was eighteen, when the study of philosophy undermined the foundations and certainty of my Christian faith.

I wandered around in total darkness for several years, in an anxious and painful search for a Universal Truth that would satisfy my existential doubts.

As luck would have it, I got to know some people who practiced meditation under the guidance of an Indian Master, and in November 1976 I was introduced to the Heartfulness system of meditation on the heart.

I started this practice with all my doubts and perplexities. The idea of a Master did not suit me. But the naturalness of the system attracted me, and as I practiced I felt different and lighter. Without any effort, all my doubts vanished into thin air to make way for a dimension of heartfelt awareness.

A year later, in March 1978, I arrived at Shahjahanpur at the feet of Babuji. As soon as I crossed the threshold of the gate, I was immersed in a state of sacred bliss that continued throughout my stay. From the depths of my being, there was a grateful recognition of his divine Essence. I had come home.

Those moments marked the path by giving me the ability to move beyond the turbulence of daily life, allowing me to focus on the source from which we descend.

My experience is of an enlightening path, with new dimensions discovered day after day in the whirlwind of life. The tangible support of the living Master has offered me all possible help to advance spiritually toward the heights possible in our human condition. 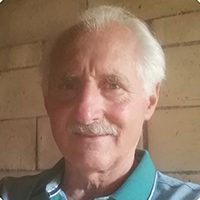 Luigi was born and lives on the island of Capri with his family. From a young age has always been interested in spirituality. He is a Heartfulness trainer.