IN CONVERSATION WITH
DR VANDANA SHIVA

Q: Dr Shiva, you have been working tirelessly for years to bring awareness and change in the field of sustainable agriculture and ecological diversity, in India and around the world. Have we progressed? What are some of your most satisfying achievements to date?

VS: I think the recognition that the Earth is sacred, the rights of all her beings are inviolable, is growing. This is what has inspired me to spend a lifetime in the service of the Earth and defending the rights of those people who depend upon the Earth.

In terms of what are the satisfying achievements, one is saving this valley where we are sitting, which is my birthplace. I returned here1 because the ministry had asked me to do a study on potential mining in this region, and our study stopped the mining going ahead. It was the first case in India where the Supreme Court ordered that commerce had to stop if it was destructive in taking away people’s life support systems.

The work I started to do with saving seeds has been satisfying in and of itself, because seeds are such important teachers of renewability, generosity and diversity, and all of that has guided my work.

Regarding the legal issues, I’m satisfied that having woken up to how seeds were under threat, and starting seed saving, I was able to work with our government and our parliament to put laws in place that defend the integrity of seed – article 3J of our patent laws. I was asked to help draft the Plant Variety and Farmers’ Rights Act so that we have the rights of farmers written in black and white. I was asked to help draft the Biodiversity Act, which makes it an obligation to protect biodiversity.

Then there are the things we started, such as the Community Biodiversity Register, documenting what is there, and all of that is now government policy. I can go to the remotest area and people are collecting this indigenous knowledge.

Then there have been the legal victories against the big giants, for example, our struggle against the patenting of neem. We fought it for 11 years and won. Basmati rice from Dehra Dun was patented by a Texas company, but we had that reversed. The wheat of India was patented by Monsanto and they also had to give up that patent. We were entering a new age of colonialism where instead of grabbing territory and saying, “This is ours,” they were now grabbing life, biodiversity, indigenous knowledge and saying, “We are the inventors.” And I think we put a brake on that bio-piracy epidemic. It still happens, but it would have been the norm if we hadn’t stopped it. It is now the exception.

I think that studying the Green Revolution, when the Punjab erupted in violence and the Bhopal tragedy took place, we’ve now been able to show that we can grow more food while protecting the Earth. We can feed two Indias through ecological farming. Our farmers earn ten times more by not being addicted to poisons.

So each of these things is on the one hand inspired in a deep way by the integrity of the Earth, and on the other hand has also managed to reverse some of the really destructive assumptions of industrial agriculture and the greed associated with industrial globalization.

Q: Thank you. You are very modest – you didn’t mention the international influence you have had. I am aware of your trips to Geneva and your current work with ecocide and the rights of planet Earth, which leads us to the next question: what are the most pressing ecological issues of our time? What are a few practical things that all of us can do to bring change for the better?

VS: I think that the most important ecological issue of our time is to stop this illusion that we are separate from Nature, that we are masters of the Earth, and that we can manipulate the Earth and other beings as we want. Because whatever we do to other creatures, some privileged powerful human beings also do to other human beings.

We have driven other species to extinction a thousand times faster than normal rates. We are also doing so much to drive the human species to extinction with the disasters we have created. But this is not inevitable. We could instead start functioning within the reality that we are members of this Earth family. We are not outside the Earth, we are part of the Earth, and any violence to any strand of the web of life is violence to ourselves. That waking up will help us recognize the limits we must respect, rather than following the illusion of limitless growth. It will help us create a better world for ourselves and others by using less. Because it is not the case that by predating on the Earth we are having better lives.

The single thing everyone can do is change the way we eat. Eating right is an important step. We are today eating food that is the result of industrial farming. It is nutritionally empty, toxic and uniform, and does not meet the needs of the planet or our own needs. 75% of the ecological destruction on the planet is because of industrial farming and a globalized food system. 75% of the diseases are related to that same food system.

So we need to change our eating to be more conscious, recognizing that we are the food we eat – it is not separate, it is not a commodity, it is not fuel for our body as a machine. We are living, sacred temples, and food is itself a sacred gift. We have to bring that sanctity back. We have an ancient saying, “Anna Brahma,” meaning food is the creator. The creator is embodied in the food.

The single thing everyone
can do is change the way we eat.

Q: India is a fast emerging nation with a young population. How can the youth best participate in a new paradigm so they have a hopeful future?

VS: First, we are not emerging from anything! We are an ancient nation, and the word ‘emerging’ was given to us by the globalized economy, which has treated us as an emerging market for itself. An ancient civilization of 10,000 years doesn’t emerge it evolves. It evolves to the next step.

Now the next step could be a very smudged photocopy of the failed western paradigm of consumerism, resource exploitation, competitiveness and dissatisfaction. It is a paradigm that is designed to destroy work. Youth has no place in that paradigm, because it cannot create work.

How do we make sure that young people in India are able to have a future? I think the first thing is to learn the deep principles of our civilization, of an ecological civilization. To learn from people like Gandhi the dignity of labor, where he would spin cloth as the way to freedom, rather than say, “I am going to be a serf in a giant mill or a giant garment industry.” He recognized that climbing another step in slavery is not progress, but breaking out of a slavery system is liberation.

We need to learn from the Buddha, who was also born in this land, the teaching of compassion. The current economic model teaches us how to be cruel, how to be brutal. And India is living that brutality, whether it is in violence against women, raping 2-year-old babies, or murdering 7-year-old children in school. This is not the India I know. This is an India that has become distorted. It is wasting too many lives. We need to reclaim India. And reclaiming India is where the youth will have a place. 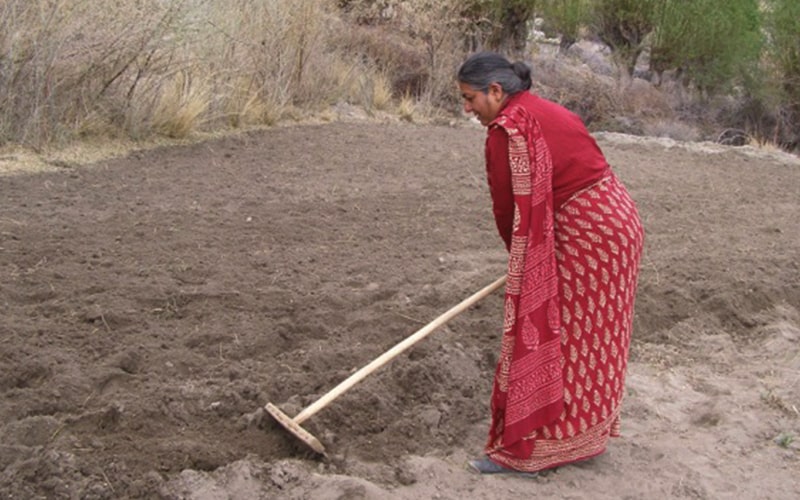 Q: What is your vision for humanity? Where are we headed? How will we get there?

My dream, first and foremost, is to continue to do what I have done for more than 50 years, but also respond to the new challenges. A brilliant scientist like Stephen Hawking said that either we will be extinct in 100 years or we will escape to other planets. My response to him is, “You guys of science, the powerful ones, have escaped too many times and trampled on too much.”

It is irresponsible to destroy this Earth, to be violent against Mother Earth, and continue that hubris by trying to colonize other planets and calling that a planetary civilization. I would call it the fiction and illusion of planetary imperialism.

What we need to know is the limits that guide us on this planet and respect those planetary boundaries. With this we become more human. The deeper we are in living within the limits of the Earth, living within the limits of social justice, living within the limits of respect for all, the deeper is our humanity. Our civilization knew this in the past, but it has forgotten it, and is now remembering it and joining with other civilizations, including those that have forgotten it for longer. We are all seeking. Not only are we seeking to know how we have a future as a human species, but the future of our human species depends on recognizing that all other species have a right to a future and we do not have a right to extermination, pushing others to extinction.

Q: Does spirituality have a role in this paradigm of change? Some people believe that you can only change the world if you change yourself – it all has to come from within through meditation. Having stayed on your farm for the last month, I see a dual way, as there is so much we also need to do to live in community, to grow food, and to regain our connection with the earth. Can you comment on that?

Dr Shiva is a force of Nature! She is a scholar, researcher, environmental activist and advisor to governments worldwide, who has helped to draft laws to protect the Earth and the farmers whose livelihoods depend on her bounty. She has also authored over 20 books. She is one of the leaders of the International Forum on Globalization and promotes the traditional practices of sustainable agriculture, biodiversity and indigenous knowledge. She funded the Research Foundation for Science, Technology and Ecology, which lead to the creation of Navdanya. She has received many prizes and awards for her tireless and inspiring work spanning 50 years.

What gives meaning to life?