TREVOR WELTMAN (American) and VAN LE (Vietnamese) have been married for seven years. After living in Vietnam and Thailand, they currently live in the US with their two young daughters. We recently reached out to them for their perspective on intercultural marriage. Here is what they sent.

V: Hey, so Heartfulness Magazine asked if we would write an article about our experience of intercultural marriage.

V: You Americans with your “cools” and “dudes” and “awesomes.” Everything is always great! Except you never answer the question.

V: And what do you want to write about?

T: I’ve got, like, ten angles or concepts we could pursue.

V: Ten! What? We just found out less than a minute ago. How do you already have ten concepts?

T: I said “like” ten, you know, three. Maybe. Hear me out. I think we should start with a massive metaphor. We could go cosmic, like how the origin of the universe starts with an intense burst that eventually slows at the fringes. Or, agrarian, about the difficulties of grafting two trees together, but how they still manage to fruit. We could draw parallels.

V: What are you talking about? The bang big? Fruit trees? They asked for insights about marriage! Why not just answer the question?

T: I am answering the question. Are you mad?

T: But you raised your voice.

T: So … you sound mad according to my culture, but you’re not. Instead, you’re annoyed per your culture? Do all Vietnamese people sound this way when annoyed?

V: Why not answer directly instead of a massive story?

V: What is? Writing the article? Or marriage?

T: Marriage. I feel like any marriage is like roller skating on ice, where the husband is the left leg and the wife the right, both struggling to find their footing individually, and also move seamlessly in the same direction. But intercultural marriage? It’s the same, except we’re fighting gravity by being forced to do it upside down.

V: Upside down roller ice skating? Fighting gravity? That’s what being married to me is like for you?

T: No. But I think that’s what being married to me is like for you.

V: Ha! I guess you got that right. Sometimes you drive me totally nuts with the things you say, and because you have no idea you’re offending me.You act so casually about it that it makes me even angrier. And also, because I can’t express myself in my language in our marriage, it sometimes feels like I have a foot in my mouth.

V: See, that’s a Vietnamese expression. Anyway, when we discuss how I feel, and you literally have no idea, it makes my feelings feel invalidated. Like, did I not just experience this?

T: Same. But I honestly think every marriage has this. Like, the whole oafish husband and nagging wife tropes, those have to come from somewhere.

V: But you’re right. After we spent more time with your family and in the US, you made way more sense to me. Meeting our children’s friend’s parents, making more American friends, it’s like there is this whole part of you that is not just you. It’s American and its Trevor.

T: And both are cute.

V: [Gagging sound] You always make that joke and it never works.

T: That’s what you think.

V: But seriously, how will we write this?

T: Well, whatever we write, I want it to be funny. Honest. Not too philosophical. No grandiose advice. Show that marriage is a work in progress and we don’t have answers. Just experience.

Like you said, the extended time we’ve spent with each other’s families and in each other’s countries has been a massive boon to understanding each other, and helps not to take the many differences in opinion personally. I also want to highlight the amazing expansion of food options.

V: What expansion? From you, I learned about bread and butter. And candy.

T: Those are three very important food groups. What do you want to convey?

V: Well, I want to share that it’s not easy. But, that a third culture emerges, a family culture. Between us we have all of these new habits and traditions that are not American or Vietnamese. Our kids get American, Vietnamese, and micro Weltman cultures that include so many experiences you and I never had. That’s pretty cool. And I love how intentional we’re able to be about it.

T: Yeah! Great point. And then there’s all of the playful language and mashups we make. To be honest, I’m a little worried our kids don’t realize how much of what we say in the house isn’t actually real, just WeltmanVietese.

V: Yeah, it was so hard when we started. But it’s gotten better, hasn’t it?

T: Sure has. I feel like our skill of being married is growing, to the point where our cultural differences aren’t a constant minefield of missteps. Rather, they are becoming more of what unites us. That intentionality you spoke of really resonates.

V: Do you really think so? Or are you just putting honey on the ear?

T: What on where?

V: [Sighs] So let’s do it. Let’s sit down later and do it.  But let’s eat first. You want fresh rolls or tacos?

Editor’s note: Upon reading the final version, Van is on record as saying, “Uh, even reading this I am annoyed!” 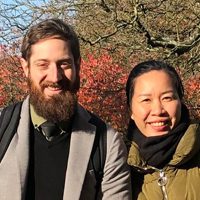 Trevor Weltman (American) and Van Le (Vietnamese) are Heartfulness trainers who have been married for seven years. After living in Vietnam and Thailand, they currently live in the US with their two young daughters.