CHRISTINE PRISLAND finds humor in the challenges experienced in marriage, thanks to some well-timed advice that put everything into perspective.

Cultural diversity comes in many shapes, forms, actions, and reactions in all relationships, and it is not always visible or apparent.

My husband grew up in the suburbs of Chicago. I was born to an English mum and Canadian dad and lived in a small town in western Canada. Not too diverse, you would think! But our differing temperaments, expectations, assumptions, upbringings, environments, and characters all contributed to differences that affected our relationship.

Early in our marriage we hit a patch where we were unable to communicate. It felt like we were speaking different languages. We were listening to sub-text, and interpreting what we thought the other meant, instead of hearing the words. It was very difficult, and we were at a loss what to do. So, we wrote to our spiritual teacher for help.

He replied, “The differences between you both are only on the surface and ridiculous.”
Ridiculous was an unusual word for him to use, and it immediately opened our eyes and hearts as we burst out laughing.
He went on to say, “Both of you should attend to the evening Cleaning1. I am in favor of your harmonious life and experiences in the natural form. With blessings, Ram Chandra.”

The laughter broke our impasse, and we were able to start working together again. We quickly realized this was not just a remedy for us, but for all relationships. The differences between everyone are on the surface and ridiculous. We are here for something deeper than that.

The differences between everyone
are on the surface and ridiculous.
We are here for something
deeper than that. 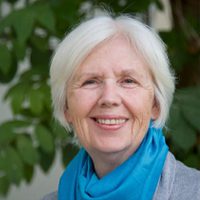 Christine began her spiritual journey at the age of 24 with an overland trip to India, where she met her teacher in 1972. She has been a Heartfulness practitioner and trainer ever since. She has been an editor for 35 years, and also a university administrator at Simon Fraser University, Vancouver, Canada.