“Please Zaïr, can you tell us the end of the story of Jomo the Brave?”

“Come on children, let’s go into that container. Well! It’s warmer, in here, isn’t it? Oh I see, some of you weren’t here last time. So let me give you a brief summary.

Jomo was convinced he was a leper, and so he left for a better place to live. His journey led him to Guinea, then along the Senegal River, and finally to Mauritania and Nouakchott city, at the border of the Mauritanian desert. A trip by boat along the Moroccan coast took him to the refugee camp at Tarifa in Spain.

JOMO REACHES THE END OF THE ROAD AND THEN AN AWAKENING

“It’s still worse here than in my village,” Jomo thought. “I left to find tranquility and peace and I have only met troubles and pointless adventures. Isn’t there a place where I can rest and live happily? Won’t it ever stop? What did I do to deserve all these troubles? Oh God! I can’t understand anything concerning my life. I did try to accept my lot, but it’s really too hard. There’s only darkness around me. Dad! Mum! Where are you?”

Then he remembered how fervently his father used to pray: “Please God, please, will you help me?” He had seen his father close his eyes and meditate. I’ll do that, he thought. What else could he do, anyway? Suddenly, he heard a voice whispering to him: “Listen to the music of your heart!”

He felt a presence near him and opened his eyes.

An old lady was standing there. So far, Jomo had never seen a woman dressed that way, with a long full brightly patterned skirt and large moon-shaped earrings. Her eyes were lined with mascara.

“What is your heart’s desire my child?”

Jomo automatically uttered these words, “My heart wants to be back in my village and be happy with the people there. I wish peace would prevail and we had no feeling of any difference between black and white people, between a Peul and a Bambara, and between a Bobo and a Dogon.”

“See, light is back within you. If you want to preserve that light, keep it very preciously in your mind and make it the goal of your journey. Don’t worry about whatever shapes your adventures take. Keep your goal in your heart and live in the present. Give, whenever you can help. To begin, go to the camp infirmary.”

On the following day, he went to the infirmary and asked a young doctor about his disease. The doctor examined him and said, “It’s not leprosy, but only psoriasis, which is neither dramatic nor contagious. But your foot is malformed.”

“Yes, but it must be terribly painful.”

“I’ve always felt that pain while I walked, so I just forget about it. For me, walking means being in pain, as others would say, but I found it normal.”

“Listen. If you want, I can arrange for an operation so that the deformity is corrected.”

“Would it be better for me?” 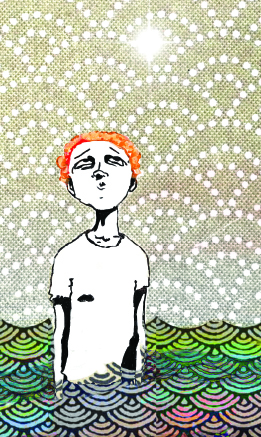 There he found himself lying in a bed, together with many other kids in the surrounding beds and infant incubators in the center of the room.

The nurses and the health assistants were so kind, looking after him and accepting him as he was unconditionally. He had never felt so well and so happy. Such benevolence brought about a long awaited peace and he felt completely relaxed.

Some people from humanitarian associations came to visit him. With their help he learnt to read. Then he read whatever books he’d come across or that people would lend him. In the evenings, he helped the attending nurse to roll bandages. Hopping on his good leg, he would also pay visits to the younger children who were not feeling so good.

SIX MONTHS LATER, HE WAS BACK TO THE CAMP

He was still more or less abused, but he was able to take things differently. He had learnt how to respond, how to hold an argument, how to defend himself and how to smile most of the time. And also, he could go on improving his reading, now that books were a-plenty. That allowed him to escape, far away, beyond time and space! Moreover, a passing student taught him how to play the flute.

Some time later, the young doctor was back. He explained that a claim had been made for his return to his home country for health reasons and been accepted. Jomo was very happy. He accepted the offer, but he felt just a bit scared.

AFTER A LONG JOURNEY, JOMO WAS BACK NEAR HIS VILLAGE

He did not want to go there straight away. He sat by the river. Two years had elapsed. The small kid he was had grown up, but he still did not know how to approach the villagers. After being in the hospital, he had realized that the people around you don’t always change so easily. They imagine all sorts of superstitions and they hang on to them confidently.

So, he asked the river, “What can I do with these people who insist on believing I am a leper? I do know now that it’s all a question of superstition and prejudice, but what should I do?

“So, you have never been a leper?’ a voice said behind him.

THE MAN WITH BRIGHT KIND EYES

Jomo turned around and saw an old puny man with bright kind eyes, who was very simply dressed.

“He must be a marabout,” thought Jomo.

Standing there, with his bag on his shoulder, he leaned on his walking stick. Then he sat down in front of Jomo and crossed his legs. His heart shone with kindness and he smiled at the world.

“Do you want to be completely sure?” he asked.

“At the camp where I was kept, I met a doctor who examined me and said it was only a light psoriasis, which was very comforting.”

“Show me,” said bright eyes. “Take off your shirt. Yes. You still have some scabs and white stains but no red sores, so everything is all right.”

The old man, who had come of nowhere, prepared a healing ointment with some clay he got from the river, and he mixed it with leaves and chamomile flowers.

“Put it on your skin twice a day and in two weeks time it will have all disappeared. You look perfectly healthy. What made you think you were a leper?”

Jomo told him about the rumors that had ruined all possibility of him staying in the village, so that he had fled from there.

“Poor people,” the old man said. “They saw leprosy outside, on you, whereas it was really a part of their inner selves.”

“Sir, you are a saint. Why don’t you come and cure them as you have just done with me?”

“I have neither the energy nor the time for it. I have to go back to the source,” said bright eyes, pointing upstream along the river. “It is my goal and it looks far enough.”

He closed his eyes, and Jomo had the sudden impression that the old man had gone far away I his mind, and was no longer there. It was quite impressive.

“Is he an extra-terrestrial, or what? Or maybe he is going to die just now,” Jomo said to himself.

A few minutes later, the old man opened his eyes again. All the stars and planets in the universe were reflected in his eyes. Jomo really felt that the old man was looking deep within him, and that he could see everything inside him and beyond.

Then bright eyes said: “You can speak to them yourself. You have gone through all those trials, which made you better understand the human soul and the complicated behavior of people. Words and speeches will be useless, but you can speak to them without uttering a single word.”

Bright eyes searched his bag and found a flute.

“Music will help you touch their hearts. Can you play it? A German flautist gave it to me. Ignorant people think it is magic, because every time he would play, rats, children and animals were enchanted. In fact, it is only the sweet melodies of love that touch the hearts of the creatures in this world. There is no magic. There is no power. There is only love.

“Every time you hear someone slander, snigger or behave wickedly with a passer-by, play your flute. Play as if it were a shrilling bird, or a grinding magpie. Reflect the vibrations they produce. Then go on with your own musical reflection and let your flute vibrate the sweet notes that come from your heart.

“Go, my son, love life and life will love you. Love God who is in you, and you will love God in the others. Love all and they will all love you.”

The old man went away along the river without looking back. Jomo went to the small hut he used to have in the village.

THE SURPRISE OF THE VILLAGERS

The villagers were so surprised to see him back and to hear him tell the story of his journey, and of all the miseries he had seen while he was roaming the dusty paths in deepest Africa.

They felt embarrassed when he stated confidently that he was not a leper. And they were still more surprised when they saw him pull out a flute from his pocket and play every time they would speak. They were dumbfounded when they heard him play.

The musical echo of their slandering sounded so mischievous that they felt ashamed. It was as if their own thoughts were being sung in a bird language that was even clearer and more explicit than human words. Then followed the notes from Jomo’s heart. They were so sweet and smooth that they finally touched and softened their hearts.

Little by little, men and women stopped tearing themselves apart with their sharp nasty words. They discovered simple pleasures and they all felt the better for it. And so felt Jomo.

“The hardest thing of all
is to find a black cat in a dark room,
especially if there is no cat.”