Once upon a time, on a gray December day, the sky in northern France was crying its fog out. The wind was giving the beat with long hooting gusts that were gnawing at everything and wrapping the bodies of a wet breath. In the muddy refugee camp of Grande Synthe, near Calais, some children huddled around an improvised brazier, while some others gathered in the corner of a shack, and lay down on cardboard to listen to a young man, Zaïr, who told them the strange story of Jomo the Brave. 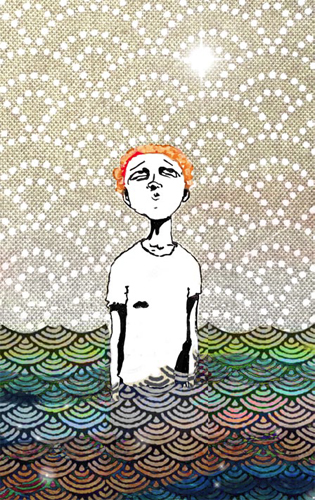 He had been living in a big Malian village, Kangara, situated between the savannah and the Niger River. Water had brought riches and prosperity in the village. The soil in the fields was rich and generous. The village had a variety of resources. The villagers had everything they needed to support themselves, plus a little more. They would sell their surplus on the market in Bamako. So they had a comfortable and easy life. The village became well known as a destination for tourism. New businesses bloomed like bacopa flowers after the rain. From rich the villagers became very rich.

Young Jomo lived on the edge of the village. His father had died at war and his mother of illness. He was living all by himself, very poorly, eating whatever his neighbors gave him for his services to them. He could be seen from afar with his fiery hair and his lighter skin color. He was different.

The village inhabitants were wealthy, but ….

The passing travellers were always surprised when they came across the proud villagers – their fake smiles were too quickly replaced by greedy looks, reflecting their piggy bank hearts. Almost every day a crowd gathered in the town square, beneath the palaver tree, for court cases. Everyone was involved in a conflict with someone else. The moment something annoyed your neighbor, he would sue you without even trying to discuss the problem with you.

The elders were fed up with all these cases. People no longer trusted each other. Fear was sneaking in and the villagers would no longer leave their houses; they were doing nothing.

As for the younger ones, they enjoyed themselves by playing stunning endless games. Why should they work? They had all they wanted, and they could make the neighboring villagers work, those who did not have such luck.

So most of the inhabitants ended up loitering and gossiping all day long in the shade of the baobabs or in tearooms. Idleness is the mother of all vices, as the saying goes. And that is actually all you could see in the village.

Boredom is a sly poisonous snake that embraces laziness and incites you to speak ill of one another. At first, you will do it just to show off, inventing things about other people: “Have you heard about Jane? Did you know … ?” Gossip turns into something sour, that will hurt your heart. It becomes wicked and destructive. In the whole village, they were gossiping in unison.

Jomo, a delicate and shy child, did not mix easily with the other kids in his neighborhood. He did not disturb those who were chatting, and he could not bear the jeering and gossiping that was going on. So he found himself alone and isolated.

One day, Jomo becomes the focus of all the talk and gossip.

“Who does he think he is, to not even come and talk with us? Aren’t we good enough for him?”

“Yeah, he takes pride in the fact his skin is lighter than ours, that’s why! But what of all the stains on him? It looks as if he had confetti on his skin? Or maybe he used a strainer to try and get tanned!”

“Well, he is always very kind to me.”

“Come on! Open your eyes, kids. He is not nice. He is as smarmy as a swarm of bees waiting for the right time to sting. Satan sent him here, for sure. He is white and his parents were Peuls. A disgrace to us! He brings bad luck.”

“Don’t you think it is strange that he’s always alone?”

“And quite strange, the way his parents died, isn’t it? And that he lives all by himself, isn’t that odd?”

“He does not even go to school. That’s definitely weird.”

“Believe me, he has a shameful disease, an old knitter said. If he remains alone, it is only to hide that he’s got it. Have you seen the state of his skin, with all the scabs on it?” “My mother says it is leprosy and we must keep away from it.”

“Fatima, have you heard about Jomo? He is a leper!” That is how the word spread. In the village, rumors were not just circulating, they were swirling. Overnight, he was pushed aside. There was no more work for him. They all closed their doors at him. Children started chasing him and throwing stones at him. If he passed by, women would threaten him.

They shouted: “Buzz off, you nasty leper. Go away!”

As for him, he couldn’t understand. He did not feel ill. Of course, the red stains on his legs and arms were itching and made him scratch. Was it leprosy?

He went to see one of the ancient villagers, an old chieftain, Moussa Diallo, who served under the palaver tree. He was known as the wisest man in the village. Jomo asked what he thought about it.

“Where there is smoke there is fire,” the old man said. “You are probably ill and you will have to go.”

Jomo went to the river and bent over the water to see his image. He touched his skin and asked the river, “Please river, tell me if I am a leper.” No answer. He could only hear his heart beating and feel the shame that made a knot in his tummy. Then he felt really bad.

He decided to leave and find peace in his heart. He walked on and on, going further and further away. He went across the Sahel, tredding sand and dust for weeks and weeks. He met with hunger and thirst and even bandits on the roads in Mauritania.

He reached the sea, not far from Nouakchott.

That is where I found him and suggested he join us. Our group of a dozen young men had fled their homes and we reached El Dorado, a place where we could at last eat our fill and have a decent life.

I was moved seeing the exhausted young boy roam the streets, his poor body so weak and his vacant look staring at the ground and his worn-out shoes. I decided to protect him as a younger brother. We would cross the sea and find that paradise we were looking for so that everything would be all right. We would certainly all feel better there than in this country where people were so frequently at war and always in extreme poverty.

So here we see our Jomo ending up on an incredible expedition. Since he was absolutely penniless, paying any smuggler was out of the question. So, after days spent walking or waiting, he found himself boarding a small fishing boat which sailed along the Moroccan coasts. Then he disembarked in Spain. During the voyage, Jomo told his story to me. The other passengers heard the word ‘leper’ and panicked. They claimed he could not be kept on the boat. I had to fight to save Jomo from being cast into the sea and promised we would disembark at Tarifa, in Spain. But the Marine Police intercepted the boat and we were sent to a refugee camp, near Tarifa, in the South of Spain.

Jomo was segregated from all the others, to prevent him infecting other people. So all the refugees became suspicious and he was rejected and even ill treated.

“This is worse than in my village,” Jomo thought. “I left to find peace and serenity and have found only troubles. Is not there any place I can rest? Will it ever stop? Why so much misery? What have I done to deserve it? God, I understand nothing about my life. I have tried to accept all that happened to me, but it is really too much. There is only darkness around me.

Suddenly, he remembered the fervour of his father’s prayers: “O my Lord! I implore you, please help me!” He also remembered how his father used to meditate with his eyes closed. So, maybe I can do the same? He closed his eyes: “What else can I do?”

After a few times, he heard a voice from inside saying, “Listen to the music of your heart.”

“We have to stop here, children. Our meals have arrived,” Zaïr said. “Your story is a sad story,” one child said. I know. But next time, we will learn whether everything can change if a sincere heart prays, and how we can go ahead without worrying what is happening around us.”