The dualities of existence
The first of the kleshas, avidya, which we explored in the last article, is the basis of the 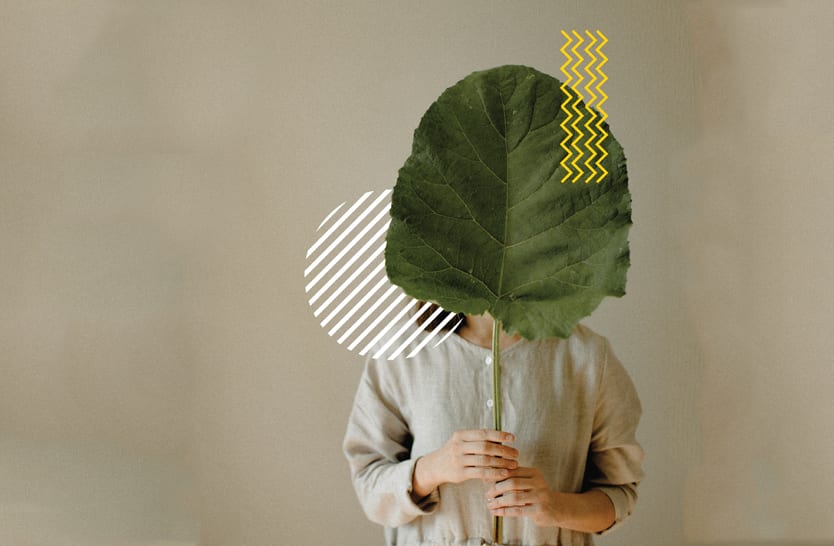 Lack of awareness
In Yoga, avidya is crucial to understanding mental well-being. It is considered to be the core

Let’s first recap and remind ourselves of the fundamental principle of yogic psychology: that our original inner mental state is one of purity, stillness and Samadhi, which is also the ultimate goal of Yoga. It is the pure state of no-vibration that lies at the center of our existence. It is the healthy state of balance and contentment, from which all the heart-based qualities like love, compassion and generosity emanate, because it is a state of oneness. Yogic psychology has never been based on pathology, but on attaining that pure state, which is the baseline for mental well-being.

This state of no-vibration, no-thing-ness, or the original void, is present in every fiber of our being. Physicists describe it as being present at the center of every atom. In Yoga, that baseline is our reference point, the eye at the center of the tornado, the ultimate state of the vibration-free stillness. It was our starting point and will eventually also be the ending point of our existence. If we are able to master that state while we are alive, we transcend the need for the cycle of birth and death known as reincarnation, as we go beyond consciousness itself, to what is beyond consciousness.

This state of no-vibration,
no-thing-ness, or the original void,
is present in every fiber of our being.

In his Yoga Sutras, Patanjali has codified the various modifications and vibrations that arise in our field of consciousness; all those things that take us away from the balance and stillness at our center, the soul. The process of refining these modifications is what Yoga is all about. Up till now, we have explored the basic types of thought patterns or tendencies known as the 5 vrittis, which can either be colored or uncolored, i.e. impure or pure. The process of coloring becomes cumulative, however, and leads to negative mental states that eventually become afflictions or obstacles to well-being and further evolution. 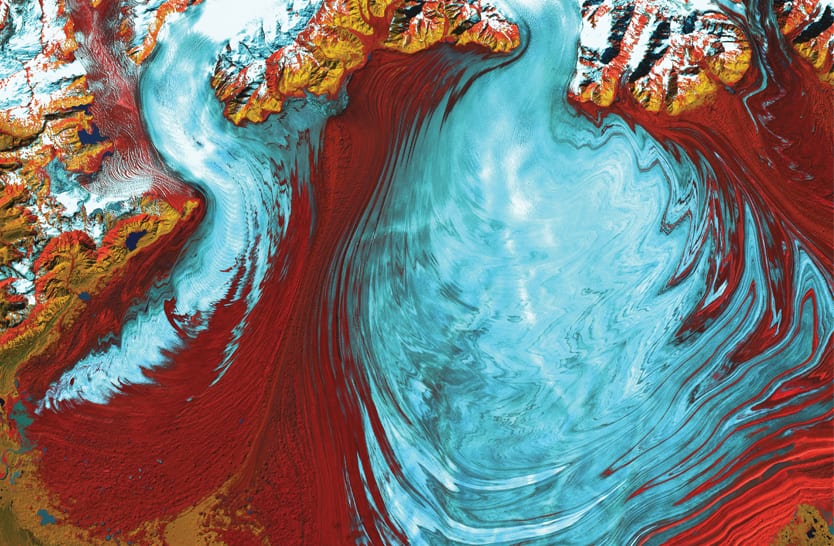 These 5 basic afflictions are known as the kleshas in both Hinduism and Buddhism, those negative mental states that cloud the mind and cause suffering and the conditions for suffering to arise. They lead to mental complications and imbalance, preventing us from being centered and contented.

Here is what Patanjali has to say about the kleshas:

If your practice is aligned with your goal (Samadhi),
the obstacles along your path (kleshas) will disappear and
ultimately you will reach your goal.

When samskaras are removed,
these afflictions can be resolved back to their origin.

Through meditation, the outer expression
of the afflictions disappear.

Whether they are fulfilled in the present or the future,
karmic experiences have their roots in these five afflictions.

While the roots, the samskaras, remain,
karma manifests in rebirth in the form of station in life,
lifespan, and types of experiences.

Patanjali starts his discussion on kleshas with the importance of having a goal, but not everyone starts a meditation practice with the goal of Samadhi, or complete oneness with the original balanced state. So another way of looking at this is: in which direction are we traveling? Along the way to the ultimate goal there may be many other goals, like peace of mind, liberation, development of love and compassion, self-confidence and clarity of mind. The important thing is to be traveling in the right direction – centripetally towards simplicity rather than centrifugally towards complexity.

Patanjali goes on to define the 5 kleshas or mental afflictions, and then establish their relationship with the formation of samskaras. Samskara theory is a critical aspect of yogic science: that impressions or modifications in the field of consciousness result in complex energy patterns being formed, which harden and create samskaras over time and through repetition. It is like the process of a track being formed through a forest. First one or two people walk along a particular path, flattening the grass or undergrowth. Others follow the same path until eventually there is a clearly marked track, which is regularly used and may eventually become a thoroughfare and even a road. What started as temporarily flattened grass over time becomes a hardened road.

Similarly, an initial behavior or response, for example fear of the dark, can be reinforced over and over again in a person, until it eventually becomes a mental tendency or even a phobia. It has hardened into a samskara. Fear of the dark relates to a few of the kleshas – first, the fear of death and clinging to life; second, dislike or pain; third, egotism, because of identification with the body and concern for the body; and finally, the ignorance or lack of awareness at the base of the fear. The mind has become colored because of past experience, so that the default response in that person is that being in the dark is inherently dangerous.

It is very difficult to completely get rid of kleshas, as many of the samskaras behind them are formed subconsciously through emotional responses, in this particular example fear. The associated pathways in the nervous system for such responses are not through the cortex of the brain, but directly from the heart to the mammalian brain or amygdala. They are not responses that involve cognitive thinking, but instead subconscious processes that affect us without our conscious control. They can potentially surface at any time. As a result, our need for vigilance is never-ending. It is also why the first two limbs of Ashtanga Yoga, Yama and Niyama, are so important for our self-development.

Heartfulness Cleaning is an effective method for removing samskaras that is independent of the neural pathways and parts of the brain involved in their formation. As it was developed in the 1940s by Ram Chandra (Babuji) as a way to purify the field of consciousness of samskaras, it was not available as a technique when Patanjali wrote the Yoga Sutras. Cleaning is one of the most potent tools that yogic psychology offers the world, because it works by cleaning the complexities and impurities in the field of consciousness at the vibrational level, rather than trying to change behavioural patterns, thought processes or the nervous system.

When we look at how the human system works, generally everything starts from the causal body or soul (the cause of our existence), which then affects the subtle bodies, at the level of the heart-mind, and then this permeates outwards to affect the systems of the physical body, e.g. the hormonal, nervous and circulatory systems. Our human system is actually like a series of layers from the center outwards, defined in Heartfulness by the 5 koshas, the 3 bodies and the 23 rings. By working at the subtlest vibrational level of the subtle bodies, Cleaning does not rely on thinking and analysis to remove the roots of afflictions. 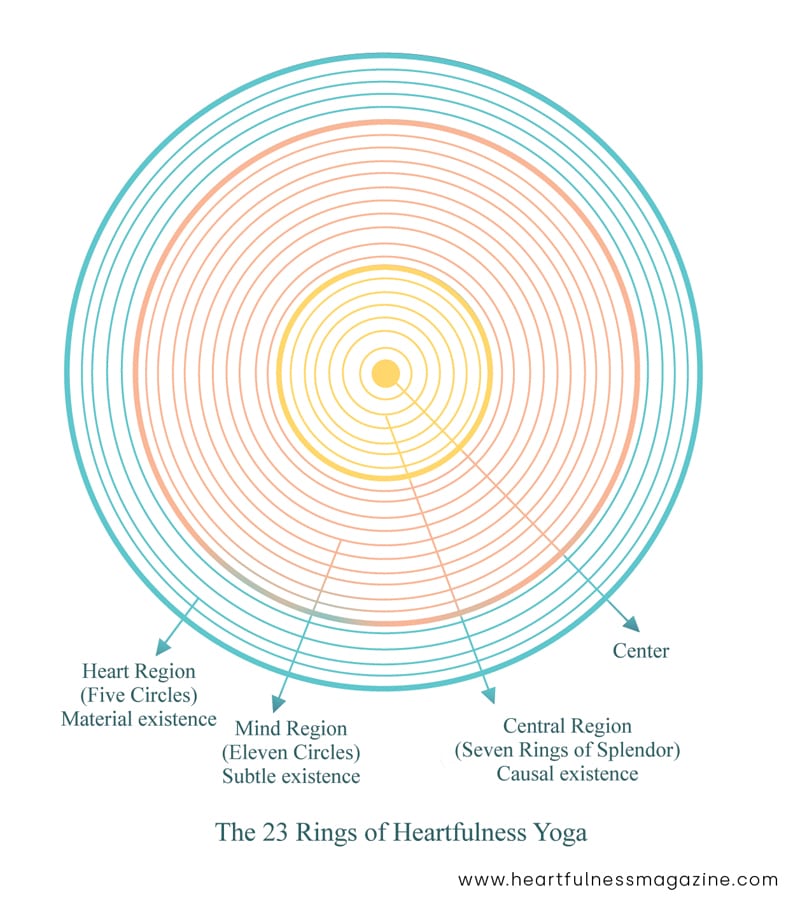 Some spiritual teachers, like Osho, have spoken of removing kleshas through prati-prasav as a process of reabsorbing the behavioral effect back to the cause, by reliving those past experiences that caused the afflictions. He also called this process involution. The reliving involves letting the past surface without judgment, without liking or disliking, being a witness to the process without getting entangled or affected by anything that surfaces. But it can take forever to reabsorb samskaric tendencies back to their source, as the roots may have started many lifetimes ago and be buried very deep in the subconscious mind. And, if we are not careful, sometimes reliving the experience may cause a reaction in us, so it can actually intensify the samskara rather than removing it. 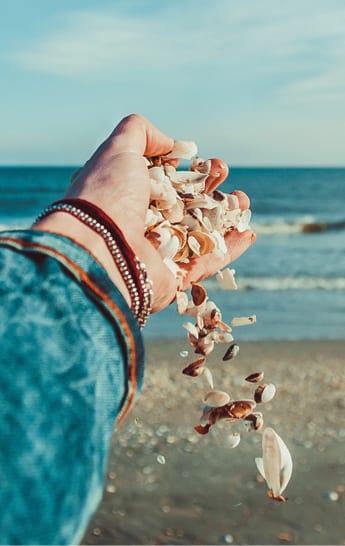 Heartfulness Cleaning is much simpler. It does not require reliving. It is the next generation of yogic practices. In fact, all the samskaras of one lifetime can easily be removed in one session with a Heartfulness trainer, without the person even being aware.

Once the root cause – the samskara – is removed, then it is definitely up to us to refine the associated outer behavioral patterns. That is why all great spiritual teachers have given guidelines for living, for example, the Vedas, Krishna in the Bhagavad Gita, Patanjali’s Yama and Niyama, Buddha’s Eightfold Path, the Ten Commandments of Jesus, the golden rules found in the Quran and the Talmud, and the Ten Maxims of Ram Chandra. For this we need self-study and self-awareness, as discussed below.

Psychologists and psychiatrists also work to change mental and behavioral patterns resulting from the past, in order to cure their patients of mental afflictions and bring about well-being. They do so through behavioral modification therapies like Gestalt, Transactional Analysis, Integral Therapy, Primal Therapy, psychoanalysis, hypnosis etc. But again, without the removal of the root samskaras, it will always be a longer and more tedious process.

Patanjali tells us that the outer expression of the kleshas will disappear through meditation. In meditation, we learn to identify with the source of our existence, the soul, rather than with the body or the mind, so in that sense meditation does help to remove some of these afflictions because we do not give our afflictions the power of our attention. The more we ignore them and focus on a higher purpose, the more chance they will have to dissolve.

For all of us, the mind is affected by the accumulation of the past, of samskaric patterns and responses that are hardwired into our central nervous system, creating channels that define our thoughts and actions, creating the blueprint for our destiny. Neuroscience also recognizes this. Whatever we have done in the past has formed the habits that determine what we do today and what we do today determines the future. Every thought and every action is self-perpetuating until we remove the root cause.

The seeds of our karma are our samskaras, and they carry over from one life to the next by impressing upon the subtle body around the soul. They create vibrational patterns, and so, at the time of conception for the next birth, these vibrational patterns draws us to certain parents, culture, life experiences etc. I have written about this at length in Designing Destiny.

Whatever we have done in the past has formed
the habits that determine what we do today
and what we do today determines the future.
Every thought and every action is
selfperpetuating until we remove the root cause.

And as Patanjali says, virtue brings pleasure and vice brings pain. This is natural cause and effect.

To evolve, however, we don’t want to be attached to either pleasure or pain, virtue or vice, or any of the other dualities of earthly existence, as they are always two sides of the one coin. Ultimately, where there is pleasure there is pain, just as where there is the brightest light there is the darkest shadow. Duality is part of the physical world, and in Yoga we are transcending our temporal physical nature towards our eternal nature. And while we remain rooted in the emotional baggage from the past, this is not possible. Our mind remains an accumulation of the past.

It is worth reflecting on the relationship between samskaras and kleshas. Here is something to think about: The kleshas are an outer expression of the samskaras that accumulate in our field of consciousness, and yet kleshas also lead to the formation of samskaras. So what is needed from our side to cut this cyclical loop?