DR. PRAKASH TYAGI is the Executive Director of Gramin Vikas Vigyan Samiti (GRAVIS), an NGO dedicated to working in impoverished rural regions of India, including the Thar Desert, Rajasthan, Uttarakhand, and Bundelkhand. In part 1 of this interview with KASHISH KALWANI, he speaks about applying the Gandhian principles of love, non-violence, and truth to support communities in need.

Q: Thank you sir, for having this conversation with us. You have been on a long and inspiring journey with GRAVIS. Could you tell us more about it?

PT: GRAVIS is a pioneering organization that was founded in 1983 in the Thar Desert. The vision was for constructive rural development on the Gandhian lines of philosophy, and at the time there were no organizations working on integrated rural development in a holistic way in that area. Since then, GRAVIS has grown extensively. It’s currently one of the leading organizations in the region and nationally, with some global recognition.

The Thar Desert is the driest part of India, with severe water scarcity, food shortages, and poverty. Since the beginning, GRAVIS has been involved in drought mitigation, finding common feasible solutions in consultation with the local people. We took up various projects and formed multiple partnerships to mitigate the effects of drought. Later, GRAVIS expanded into other areas of human development, including healthcare, education, and rural livelihood.

The core of GRAVIS’ work has been active community involvement, and that includes consulting with the community to find solutions, taking their advice, and developing future projects and programs. We ensure that they are fully involved in many ways. GRAVIS has led to the formation of more than 3000 community-based organizations (CBOs), and many of them are sustainable, self-reliant, confident, working on their own, leveraging government resources, and developing their own agenda and priorities. That helps in sustaining the initiatives we have taken up.

We have been extending our work regularly every year, and currently we reach about 1.5 million people.

GRAVIS has three defining aspects. The first is our technical expertise in two core areas:

The second aspect is our philosophy. We work in areas where the need is the greatest. We don’t really go to areas where programs are being implemented by other organizations, as we want to ensure that our resources are taken to the people most in need. So, most of our projects are in very remote underdeveloped areas.

Also at the philosophical level, linking it with the Gandhian model of rural development, it is important to work for societies and communities that are inclusive, favoring gender equality and harmony at all levels. This is needed for decision-making in the distribution of resources, and for making sure that there are no disputes and no divisions within the communities.

The third aspect is community participation. We make sure that people are with us. Oftentimes we call community-based organizations, because they are the real power, they are the stakeholders of everything we do. That is how I would want GRAVIS to be known.

Q: Thank you, Sir. When I volunteered with GRAVIS, I noticed how the buildings at the field site were named after the Gandhian values of prema (love), ahimsa (non-violence), and satya (truth). That really stood out for me. Do you have any particular memories that stand out for you in the years spent with GRAVIS?

PT: There are many memories, and so much has happened in the last thirty-seven years, but my family involvement is extremely important because that is how GRAVIS came into existence. My parents decided to do something in an area that was extremely underdeveloped at that point of time. It was the late 1970s and I remember coming to Jodhpur when I was six years old. The conditions were very difficult, and Jodhpur was a very insignificant place. It would have been very easy for my parents to live elsewhere, but they took the decision that life was going to be spent for a cause in an area where there was a significant need. That’s how GRAVIS was founded.

Another memory I have is that the organization grew through limitations and hardship, and that think tanks don’t come overnight. GRAVIS didn’t have a vehicle for years, although now it is different. It took years for GRAVIS to build its capacity and resources, and to become expert enough to understand the community’s needs. I think it requires a lot of dedication. It also requires the patience to spend time with people.

In this era of the Internet, everything seems to be so fast, but that’s not real life. In real life you need time, and time cannot be replaced by anything else. What you can do in X amount of time, you cannot do in Y amount of time by accelerating work horizons. My memories are the memories of those hardships, of the struggles I grew up seeing.

The core of GRAVIS’ work has been
active community involvement, and that includes
consulting with the community to find solutions,
taking their advice, and developing
future projects and programs.

For nearly ten years I traveled from a village to Jodhpur every day in a bus to attend school. It was a 12-hour-a-day process from 7 a.m. to 7 p.m. All of this is important, because that’s how organizations become strong in their values and beliefs, and how they make connections to communities.

GRAVIS faced very severe resistance in 1989-1990, when the whole country was burning. At that time, our centers were attacked and destroyed, because we worked with the lower castes, the so-called Dalits, and we were given a message that it was time to go home and not to spoil the community equations and dynamics. But we sustained and we fought back, literally from a point where nothing was left. Everything was destroyed, everyone was beaten, and then the organization reemerged. That’s a strong memory.

A more recent memory is my own personal decision to stay with GRAVIS. I didn’t plan it that way, but with my father’s demise there was a vacuum of leadership, so I traveled back from the U.S. to India ten years ago.

Last and not least – the love of the people has always been visible. In the rural areas, we receive so much affection, so much love, and that’s what makes the difference.

Q: Yes, indeed. What are some practical tools that we can incorporate into our lifestyle to be more conscious of the way we are living and more involved in community initiatives?

PT: I wouldn’t know. I’m a very unorganized man, I must admit. Everyone has their own way of doing things. If you ask me, at a very personal level, being on time is extremely important and it helps me measure if what I’m doing is fruitful or not. At the end of every 24-hour cycle, I make a calculation of what I did today and how I spent my time. It’s important to be accountable to myself about how my time was spent. I don’t know if it’s practical or more philosophical, but to me it’s important.

Q: Doing something new is such a creative tool! Finally, is there anything you’d like to share with our readers?

PT: Mahatma Gandhi said, “My life is my message.” Every life is a message, and every life is capable of leaving a message. It doesn’t have to be like Mahatma Gandhi’s life; it could be Kashish’s life or anyone else’s life. It’s up to you to make that message whatever you want it to look like. And your entire life works for that message, so it can’t be created overnight.

Q: What is your life’s message?

Q: Thank you for taking the time to share your story and message with us. 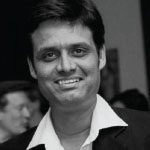 Dr. Tyagi is the Executive Director of Gramin Vikas Vigyan Samiti (GRAVIS), an NGO dedicated to working in impoverished rural regions of India, including the Thar Desert in Rajasthan, Uttarakhand, and Bundelkhand. He is a physician and a public health professional by education, and at GRAVIS he oversees administration, coordinates various programs, develops new projects,... Read more