My little family and I took advantage of the holidays to turn ourselves into explorers. Africa. An expedition to Nigeria to find Lake Chad.

Our SUV was stuck! We continued on foot to find help. Nothing. No one. We thought we were close to Lake Chad and our map showed the village of Blangoua, near the Chari river. But obviously we were lost. A very arid landscape. No trace of a lake. No trace of greenery. Just a few shrubs here and there.

Suddenly, we saw a few straw huts in a small valley in the distance, hidden by acacias and surrounded by ruined fields. The land was hard and packed. No doubt the drought. At the bottom of the hill, the presence of rocks and the sound of lapping let us guess at the runoff of a meager stream of water. 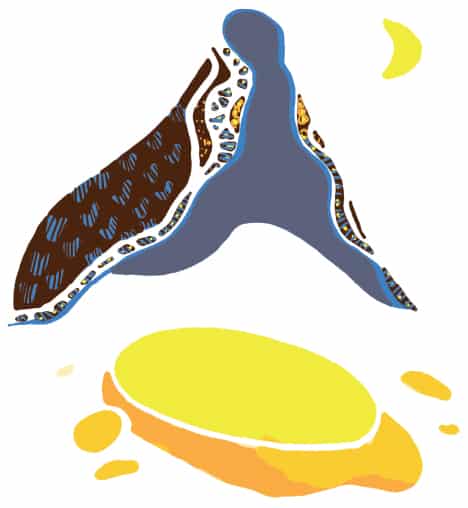 In the dusty hamlet, women sat on mats with their babies. They looked tired. Children were thin, but they looked happy. Disoriented, we heard misery screaming at us: What are you doing here?

The chief of the hamlet welcomed us warmly and explained: “Warriors passed by and took our flock. We have become poor with war, but we offer you hospitality with great pleasure. If you would like to share the meal with us. God has offered us poverty so that we become better.”

Over a cup of tea, he added, “A sage Haoussa told us that behind every problem there is a gift. But, instead of waiting for the gift behind the problem, we are sure that the problem is the gift, and we try to make the most of this gift from God. And God really spoils us because he is present in each of our acts. And we manage for the rest.”

In turn, we explained our situation. He advised us to sleep there that evening, and told us that the men of the village would help us pull the SUV out of the sand the next morning at dawn.

We offered them our provisions, and shared an improvised meal with everyone. Then the old people began to tell funny stories that made everyone laugh. I asked them how they were getting water so they explained that every morning the women went to fetch water from a valley one kilometer away.
“But why don’t you go and collect the water from your creek, right here?
A silence ensued. No one dared speak. Then finally the oldest man spoke.

“We do use the water from the creek, but there is very little of it. We use it sparingly. If we used it for all our needs, let alone irrigation, our land would be dry in a month. The trees would no longer have water. The insects would not have enough to eat. The birds would also leave and there would be no more pollinated plants and no animals. And, what’s more, it is a sacred place for us because at the edge of the stream there is the man with the empty cape. 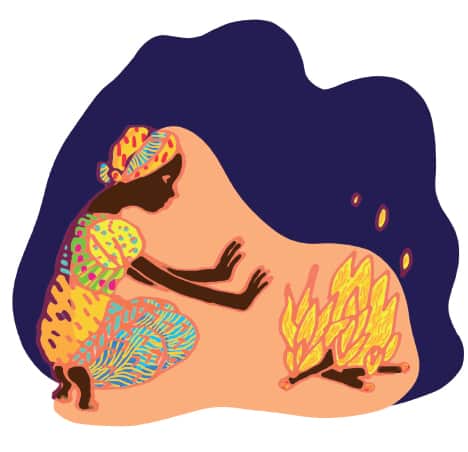 “He is a Sufi hermit invisible to our eyes. No one has ever seen his face or his body. In the distance, we see the large black cape covering his stooped shoulders. He is there, sitting on a flat stone, all the time, under the sun and under the moon. It is said that the winds come to whisper the secrets of families to him. No one in the village would dare to disturb the peace of this holy man. We respect him a lot and if we go down to the creek, it is to keep him company in silence and to benefit from his Presence.

“This has not always been the case. In fact, for decades people dared not approach him. One day, the bravest of the brave approached him to look at him face-to-face. There was nothing under the cloak! Nothing! The terrified warrior fled never to be seen again. If you went near the hermit, you would see his cloak on his shoulders and that’s all. Nobody talked about him. Everyone feared him. No one knew whether it was a human being, or a djinn. Somes said it was a demon, and others a crazy hermit descended from the mountains. “Were these fantasies? Rumors and gossip to fill the boredom of too many long evenings? The rest of the history of the man with the empty cape will tell us.

“The man without a body continued to be seen sitting on his stone. When we were wealthier, before the war, the women of the village sometimes brought him something to eat – some fruit and Jollof rice they put down a few steps away from him. The man did not turn around, but a voice said, ‘Thank you.’ Then they would respond with a nod, and go back to the field, to the house, or to the care of the animals.

“Then there was the war and the winter of misery. The ruined pastures, missing goats, our decimated poultry farm, and hunger in the belly of children.

“One evening, around the fire, we were talking to the Lefiami family. The father was explaining that their last hen had died that morning, leaving nine thin, little chicks promised to a certain death. We were all quite bothered, and remained silent around the fire. Kalista, the youngest Lefiami, was seated near her father. With her chin resting on her knees, she stared at the flames dancing in the starry night.

“Suddenly she exclaimed, ‘Tomorrow morning I shall go see the man with the empty cape!’ ‘You’re crazy,’ her mother scolded. ‘Imagine that he looks at you and his look turns you to stone, like all those around him! I’m getting chills just thinking of it!’
‘But he never ate anyone,’ replied Kalista. ‘Why would he hurt me? I just want to talk to him. And moreover, as the proverb says, let us beware of confusing the importance of things with the noise they make.’
‘There’s no smoke without fire,’ her mother retaliated. ‘Even your aunt Yamina says that it’s a jinn. We shouldn’t make him angry. Everyone says it.’
‘A fantasy believed by ten million people remains a fantasy,’ challenged Kalista, determined to follow her heart. 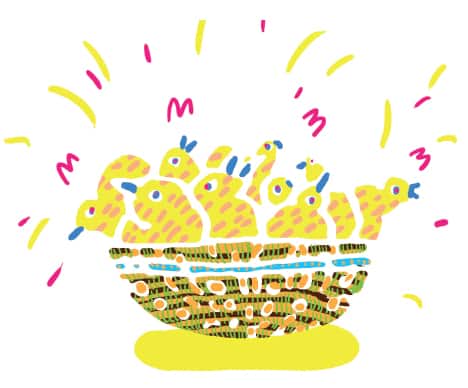 “Stop it!’ said her father. ‘There is nothing under the cloak. There is no one but the wind.’
‘Well,’ replied Kalista, ‘What risk is there, if there is nothing? I will bring him our chicks. The hen is dead. They’ll die anyway. Perhaps he will save them?’
Her father nudged her with his foot, grumbling, ‘Go to bed and stop talking rubbish.’

Early the next morning, Kalista put her nine chicks in her basket, and hurtled down the steep slope to the rocks by the stream. She saw the man with the empty cape sitting in the same place. She stopped to catch her breath, calm the beating of her heart, and then advanced cautiously. From behind, she could see his large black cape with its hood.

What was Kalista going to do in this situation? How would the man in the cape react? Was she right in believing in the goodness of life? Was she right not to believe the scary rumors? Or was she really imprudent for not having listened to the advice of her mother and father? Perhaps she would be transformed into a stone statue after all.

You will find out in the next episode what happened to the nine chicks, the young Kalista, and the inhabitants of the village.

What gives meaning to life?