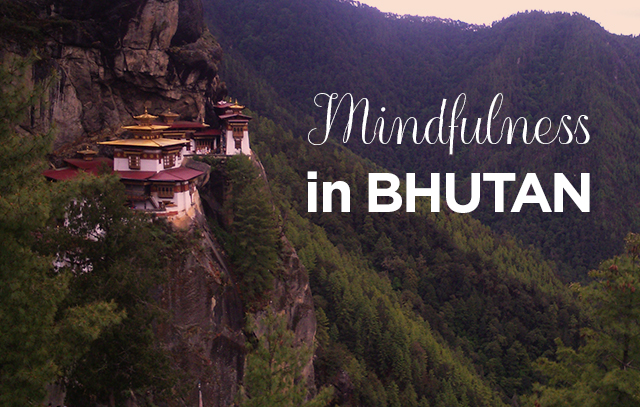 I visited the Himalayan Kingdom of Bhutan almost a year ago. Today, I am still transported back to that land of the Thunder Dragon from time to time. Reflecting on my time in Bhutan, I see how it taught me lessons that I find myself applying every day. After my trip, my life remains the same on the outside for anyone who saw me every day, but my heart is open in such a tender and simple manner. Below are some lessons I picked up from Bhutan.

Happiness is the highest factor

Gross National Happiness acknowledges that material wealth is important, but it equally values the importance of community well-being, including culture, governance, knowledge, wisdom, health, spirituality, psychological welfare, a balanced use of time, and harmony with the environment.

Now, that is not a tall list. When I landed in the country, I was transported to a beautiful place where there was so much joy. The attitude of the people did not feel materialistic at all. Their attitude was filled with love, care, concern and they always smiled. It was a genuine smile, one where you could feel an uplifting energy all around the person.

When I think about it, what is the reason we do all that we do, throughout our lives? We work hard, get good jobs, pursue relationships, and achieve success. Ultimately, we do all this to be happy and to make our near and dear ones happy as well. So why not be happy in the first place, and allow the rest to automatically follow? That is perhaps the law of Nature, which the Bhutanese people have already discovered.

I was reminded of the words of the modern-day saint, Ram Chandra of Shahjahanpur who says, “Joy attracts Grace.” Yes, it does indeed, and Bhutan is a fine example of that.

Technology is neither a want nor a need; it just has its place

We stayed in a wonderful hotel, in one of the finest and best in Bhutan, according to travel sites. No, it was not expensive at all. That is one thing I liked about the country. One evening there was a power cut. We were strolling around the hotel grounds, enjoying the scenery and waiting for power to be restored.
“Please come inside for dinner sir,” the Maître requested, seeking us out.
“Maybe after an hour, it is so early,” we insisted.
“The power may not be back until midnight, so we suggest you have an early dinner,” he insisted.
I kept wondering all the time, why was there no generator or back-up power installation? When I enquired, he looked at me like I was asking an unusual question, and said, “But Ma’am, it will be back in the night. There must have been some avalanche in the mountains and the lines must be cut. It will be restored soon. And we have a lot of candles. Why should we waste fuel?”
Yes, of course, his rationale was sound. Why should we, indeed? With our own cozy first-world lifestyle, we can’t imagine such an answer from hotel personnel. It was not that they did not care for power back-up. They just didn’t think it was worth having; it was seen as a waste.

Did you know, Bhutan got its first TV in 1999 and access to Internet only a few years ago? By that time many of us were already arguing over which channels to watch, and who should have absolute control over the remote, and perhaps even buying separate TVs for the bedroom and the living room.

I observed that for the Bhutanese, TV or Internet was not the center of their lives. Rather, they are tools that can be used intentionally to get information or connect with each other. I never saw a single Bhutanese checking his mobile phone in my entire trip. When I finally enquired whether they owned mobile phones, the receptionist took out his iPhone and asked me if I would like to make a call or borrow it. So they did have phones, but they only seemed to use it when they had to.

Similarly, there was no Wi-Fi available in our rooms, only in the hotel lobby, even though we stayed in a wonderful place. When I enquired about the Wi-Fi, one hotel staff member responded, “But Ma’am, do you want to use the internet? Do you want to check for flights or emails or perhaps do your official work?”
I am sure he would have laughed if I had said, “I think I have 500-odd messages in my WhatsApp from today which I want to check, lest it becomes 1000 tomorrow.”

Bhutan is also the only ‘carbon-negative’ country in the world. Its constitutional laws have declared that, at all times, its forest grounds should be greater than 60 percent of the total land area. At present, the green area is 70 percent.

When Bhutan’s Crown Prince Jigme Namgyel Wangchuck was born in 2016, the country gifted 108,000 saplings to the prince. In Buddhism, trees are providers and nourish all life forms. Planting a tree is the most wonderful gesture for someone we love. A tree symbolizes longevity, health, beauty and even compassion.

Bhutan doesn’t allow any smoking in public, public product advertising or large-scale mining or extraction projects. In addition, plastics are completely banned. These are huge steps to improving the environment. The country has also remained completely organic; there are no pesticides or insecticides used. I could go on with my endless list of things that Bhutan does for the environment, rather, avoids doing to prevent spoiling the environment.

An everyday routine of meditation

Buddha Purnima is the day Buddha was born, attained enlightenment, and passed on to the Brighter World. I had a great curiosity to visit Bhutan on Buddha Purnima. So we planned this trip to happen on that day to see how Buddhists celebrated. I noticed that on this day people meditated a lot. It was not a festival but rather a day of rumination, a day of meditative silence and contemplation, spent deep in prayer. Spirituality felt like an integrated part of their lives. It is not a unique or special concept, like a mindfulness class you might join, once a week. For them, they meditated as if it was an everyday routine.

Similarly, the Heartfulness meditation I practice has a routine of morning meditation and evening rejuvenation which has been so effective for me personally. I noticed that the disposition of such Heartfulness practitioners was so similar to the Bhutanese people. They have this all-encompassing super calm around them, a disposition of cheerful acceptance, and a balance in their life. For them, everyday is a Buddha Purnima because of their regular practice of meditation and rejuvenation. If you haven’t tried Heartfulness meditation yet, I sincerely encourage you to try it .

It was also interesting to observe how the Bhutanese people did not have to motivate each other to meditate. I think that is the key to maintaining their kind of peaceful disposition.

Before visiting, I had wondered why Bhutan was listed as one of the happiest countries in the world.

After visiting I know the answer – they know that the purpose of human existence is to learn how to love. And therefore, they’ve placed their efforts in the right direction by creating an environment of peace, care and joy.

Traveling to Bhutan for me was a unique, life altering experience. I felt transported to an alternate reality, like a paradise situated in the mysterious mountainous kingdoms of Shangri-La.

It wasn’t that the Bhutanese have no challenges. I observed that in spite of challenges, their hearts were always open and their attitude loving.

These lessons do not end here. They have helped me strive to improve from day-to-day and begin a journey towards my own Ultimate Reality, as Ram Chandra of Shahjahanpur describes in his book, Reality at Dawn. But that is another article for another time.