Home› It changes everything› Neuro-development in children – part 2

DR. ELISABETH BOUDERLIQUE and DR. BIRGIT DÜRR have specialized in behavioral disorders in children from a neurodevelopmental perspective. They were interviewed by PURNIMA RAMAKRISHNA for World Mental Health Day, October 2020, and in part 2 they explore reflexes, the brain hemispheres, and creating rhythm in the brain.

BD:The two most important aspects of supporting the development of the brain are integrating primitive reflexes through motor exercises and stimulating the underdeveloped hemisphere, mainly with sensory stimulation.

If there is no damage or pathology in the brain, if it is an electrical imbalance, it can be corrected. And when the imbalance in the brain is corrected, all of the other imbalances are most often corrected as well.

Q: Primitive reflexes. Can you tell us more about their role in brain development?

The most common primitive reflexes are:

These reflexes, which persist beyond the first year of life, are called “persistent primitive reflexes.” They can affect normal neurological development, and therefore be the cause of a multitude of symptoms, including learning difficulties and behavioral issues. There are simple exercises that can help to integrate them.

I will give you one example, because most people know the Moro Reflex. If you make a loud noise, the baby will suddenly open their arms and close them again. If this reflex persists for too long, it becomes the root of many symptoms, such as impulsive behavior, hypersensitivity to light, sound or sudden movement, dislike of change, difficulty with new or stimulating experiences, chronic anxiety, uncontrollable flushing when embarrassed or nervous, mood swings, and aggressive outbursts. This reflex can persist even in an adult, so it is important to look for these primitive reflexes.

Q: Can you tell us more about the hemispheres?

BD: That’s a good question, because to understand what is happening in the brain of a child with neurodevelopmental issues, we have to understand the different functions or tasks of the two hemispheres.

The right hemisphere is online first. It sees the big picture. It is there to protect us. It is cautious. The right brain is responsible for non-verbal communication, which is at the core of socialization. It forms relationships. It is able to read between the lines. The right hemisphere learns subconsciously, implicitly. We don’t form conscious memories in the first three years of life. That’s what we call “childhood amnesia.” It is responsible for reading comprehension and mathematical reasoning. It deals also with gross motor skills. It is responsible for long-term, non-rewarded, sustained attention, like a hunter waiting for hours for his prey. It also deals with withdrawal behavior and negative emotions, such as fear, guilt, and shame. The right hemisphere will down-regulate our immune system.

The left hemisphere sees details, like the individual trees in a forest. It is all about “why.” For example, if you think of a child that is 2 or 3 years old, looking at small animals on the ground and asking, “Why this?” It deals with fine motor skills. It is the logical, sequential brain, looking for patterns. It is responsible for reading words, spelling, and basic arithmetic. The left hemisphere forms conscious memories. It deals with approach behavior and emotions, such as anger, surprise, and happiness. It is the hemisphere that is naturally impulsive, or even compulsive or obsessive. It is responsible for short-term, goal-directed, reward-reinforced attention. Video games will stimulate or even overstimulate the left side of the brain.

As an analogy, imagine a car going downhill. When you remove your foot from the brake, the car goes forward by itself. Think of the right hemisphere as the brake. If there is not enough “brake,” the left hemisphere will start automatically.

Q: Can you give us a concrete example, so that we can understand what happens with a child who has ADHD?

EB: A child diagnosed with ADHD usually has underdeveloped, under-integrated networks in the right hemisphere. The child will present symptoms related to right-hemisphere delay and a left hemisphere that is too strong. The child can be hyperactive, obsessive, compulsive, and overly focused on details, not paying attention to the big picture. They like to do things over and over again. They can have tics – motor tics and vocal tics. A strong left brain will be responsible for anger outbursts and hypersensitivity to sound, especially high frequency sounds, so you can see the child covering their ears when there is too much noise. The symptoms related to a low activity on the right hemisphere will be poor, long-term sustained attention, and poor non-verbal communication, so they will have difficulty picking up on facial emotions and social cues. The child can also have poor mathematical reasoning skills, and difficulty comprehending what they are reading. The right brain will not play its role of inhibition, so the heart rate can be high, and the immune response will be too strong with food sensitivities and environmental allergies, for example.

This imbalance will persist throughout the person’s whole life and this is why there are epidemics in these issues in the adult population. A child will not grow out of these issues, but may just express them in a different way as an adult. The imbalance will still be there. It is not a coincidence that 1 out of 5 children have some kind of learning or behavioral issue, and 1 out of 5 adults have some kind of mental issue.

Q: My next question follows on from this. Could you expand on the connection between a brain imbalance and the effect it has on the overall health of a person?

BD: Almost all kids with developmental imbalances not only struggle in school with learning and behavior, but suffer from other health issues as well. In this context, it is interesting to look at the Adverse Childhood Experiences Study (ACE Study), which is one of the largest investigations ever conducted to assess the association between childhood exposure to traumatic stressors and health and well-being later on in life.

The story started with a study at an obesity clinic in California in the early ’90s. People were there to lose weight and after some time 50% of people dropped out. The interesting thing was that the people who dropped out were the people who had the best results, meaning they were losing weight. So the researchers asked why. What they found when they interviewed these people was that the majority had experienced abuse in childhood. After that, they investigated more than 17,000 patients about their experience of childhood trauma. There were about ten adverse childhood experiences (ACEs) that played a major role in health later on in life – emotional abuse, physical abuse, sexual abuse, physical neglect, emotional neglect, exposure to domestic violence, and household mental illness, to mention a few.

They also found that there was a correlation between the number of ACEs a person had experienced and the chance of poor outcomes later in life. When they followed people during later life, they saw that they were 400 to 1200% more likely to struggle with health-related issues like diabetes, cancer, depression, heart disease, autoimmune issues and earlier death.

So what is the relationship between a child having an ACE and a child with a neurological developmental delay? They both have disrupted neurodevelopment. When a child is neglected or abused, neurological development is disrupted. Whether a child has a delay in neurodevelopment due to an ACE or for the other reasons we mentioned before, it always has an impact on social, emotional, and cognitive development, and a severe impact on the whole body and overall health. This leads to an increased risk of developing chronic diseases.

To round off the picture of this topic, we would like to read to you from Dr. Melillo’s book, Reconnected Kids: The Symphony of the Brain.

“We know it is not the instrument which is broken.
The musicians just need more practice and encouragement.
We are trying to find the networks in the brain
which are malfunctioning and we are stimulating them
so they get back in rhythm with the rest of the brain.”

“Sometimes the conductor signals the right side to play louder while he tones down the left side. The key to both sides playing beautiful music together is that each musician must not only play the right notes but must play them at precisely the right time. This ebb and flow must be perfectly timed. A musician might miss a beat and subsequently, the two sides will get out of harmony.

“We know it is not the instrument which is broken. The musicians just need more practice and encouragement. We are trying to find the networks in the brain which are malfunctioning and we are stimulating them so they get back in rhythm with the rest of the brain.”

Q: Thank you Elisabeth and Birgit. 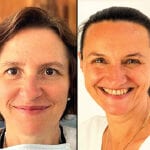 Elisabeth is an occupational medicine specialist, who helps people with neurodevelopmental disorders at her clinic in the south of France. She is also a Montessori classroom director for children aged 3 to 6, and for special needs children. Birgit is a general practitioner from Germany, who also specializes in neurodevelopmental disorders. She has completed diplomas... Read more