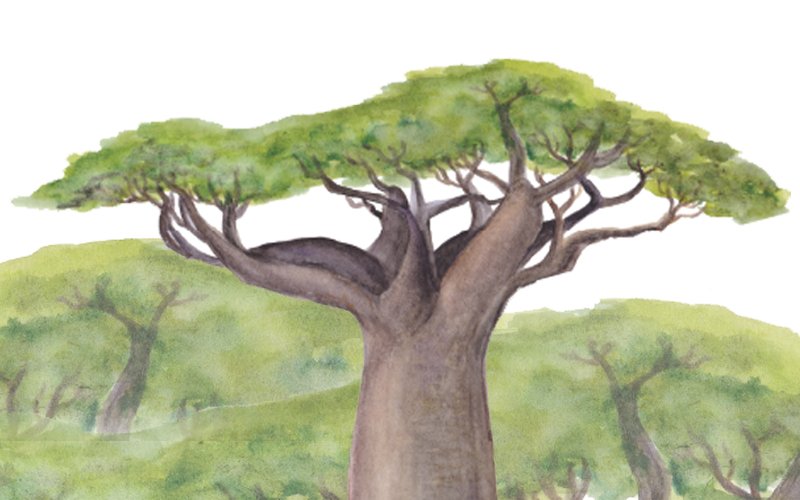 Have you ever come across a tree that looks as if it is standing upside down? If the answer is yes, then you have probably come face-to-face with the strange and mighty Baobab. This majestic tree, tall and shrouded in mysteries, is known to have a lifespan of more than 1000 years. This time we present to you some of its intriguing features and medicinal properties.

Genus: Adansonia. Species: There are various varieties, including A. digitata, A. grandidieri, A. gregorii, A. kilima, A. madagascariensis, A. perrieri, A. rubrostipa, A. suarezensis and A. za.

Baobabs thrive in arid or semi-arid climate and they grow in abundance in the low-lying sandy belts of Africa. Of the nine known species, six are native to Madagascar, two are native to Africa and the Arabian Peninsula, including India and Sri Lanka, and one is native to Australia.

All species of the Baobab are deciduous and they mostly grow as solitary individuals, largely scattered over the thorny woodlands of the African savannahs. If the soil type is suitable, they may also grow in small groups; they cannot grow if the sand is deep. These trees are sensitive to water-logging, frost and strong winds and can be uprooted by storms.

Tribes along the Zambezi believe that when the world was newly created the Baobabs stood upright and proud. However, they looked down upon the smaller plants and growths around them. Their vanity angered the gods who, in turn, uprooted these mighty trees and shoved them back into the ground upside down. The natives love to narrate different versions of this story from generation to generation.

One of the largest Baobabs, found in Kafue National Park in Zambia, is called ‘Kondanamwali’, which literally means, ‘the tree that eats maidens’. Legend says that once four beautiful maidens took shelter in the shade of this enormous tree, and the tree fell in love with them. Soon the maidens came of age and started looking for prospective husbands, which made the tree very jealous. One stormy night it opened its trunk and took in all the four maidens, and even today people claim to hear the maidens crying inside the trunk.

Certain tribes along the Limpopo and in the Transvaal Province bathe young boys in the water used to soak baobab bark, believing that by doing so they will grow up into big men, as mighty and strong as the Baobab.

There is a scientific basis to some of these native beliefs. For example, women living in kraals where Baobabs grow in large numbers are believed to be more fertile. These women regularly consume a soup made out of Baobab leaves, which are a rich source of vitamins, and this soup compensates for any deficiency in their diet. Physicians have confirmed that it also improves the fertility rate.

There are several superstitions attached with this strange-looking tree. Some people believe that if you pluck a flower from the Baobab tree you will be eaten by a lion. Others are of the belief that drinking water in which seeds of this tree have been soaked will save you from crocodile attacks.

The Baobab has very distinguishing features that sets it apart from other trees. It is massive and can easily grow up to a height of 5 to 30 meters. An adult tree usually has a vast trunk with a diameter of about 2 to 10 meters, appears pinkish grey or copper in color and, unlike most other trees, the texture of the bark is smooth and shiny with longitudinal fibers.

The tree branches out widely and, when it is bare of leaves, the branches look like roots sticking out into the air as if the tree has been turned upside down. The actual roots of the old trees are tuberous at the tips and rarely grow beyond 2 meters into the soil.

The leaves of the tree are simple, and the first leaves appear mostly at the end of the season or just before the first rains. This is also the time when flowering begins. Large whitish flowers bloom late in the afternoon and fall off by dawn the next day. The flowers have a rather pungent fragrance that attracts bats, the main pollinators of the tree. The fruit can grow up to a foot long and has an acidic pulp with large seeds.

Various parts of the Baobab have been used in preparing traditional medicines since ancient times. It is a multipurpose tree that not only provides shelter and protection to several species in the ecosystem but also provides human beings with food, clothing, medicine and raw material for preparing useful items

The Baobab has the unique ability to regenerate upon being burnt or stripped of its bark. When it perishes, it simply rots from the inside and collapses into a heap of fibers, which makes it look as if it just disappeared! But this magical tree is under threat today because of overexploitation for its multipurpose utility as well as due to climate warming. It is also adversely affected by pests and fungal diseases.

The Baobab has been identified as one of the most important tree species to be conserved in Africa and other parts of the world. It calls upon us to recognize the mutual dependence of all life and preserve this magnificent being by using its resources wisely. After all, wisdom is like a baobab tree; no one individual can embrace it.