Space, time & the creation of the universe

Last month, in Part 7, KAMLESH D. PATEL explored the question, “Why should we want to expand our consciousness towards a higher destiny?” both from the individual perspective as well as for humanity as a whole. In this issue, he shares with us some of the outcomes of an expanded consciousness.

THE SCIENCE OF SPIRITUALITY

The Evolution of Consciousness Series

The purpose of life is to facilitate expansion of available consciousness to its fullest potential. This expansion eventually takes us to a state of lightness and joy, where the subtle body is pure, simple and refined, where there is no longer any separation between the heart and the mind – they are one, with the heart as the field of action for the mind and vice versa. This integrated, holistic state of being is known as Yoga. All the practices of Yoga are designed to bring about this state of oneness, or unity with the Source of all existence.

In mystical or religious terms, this Source of all existence is given the name God or divinity. In science, it is called the absolute, ultimate reality or original state of existence. It is the Base on which everything exists, the substratum of the existence of the universe. Yoga unites the two fields of human thought, as Yoga deals with pure knowledge. Yogis of high calibre are able to do this based on their direct experience, and have described God in a scientific way. This direct perception is possible because of the expansion of consciousness that comes from yogic practice.

For example, in physics, scientists speak of the space-time continuum, and yogis describe the same thing – the interplay of akasha and avakasha, the Sanskrit words meaning space and time.

Here is a brief description by the great yogi of the 20th century1, Ram Chandra of Shahjahanpur:

Before creation there was only ‘space’ all over. Thus the being of God (Isha) was a later development, and it took some time for its appearance. We see space as endless and eternal, so we conclude God as well to be eternal. Time followed after God had come into being. Thus space served as the mother of creation of God, and time was the negative state of it. Everything must have its end in Endlessness. Motion was also there in everything, however fine or invisible it might be. One might also ask, who created space, then? The only possible answer can be that the need for creation of God and of the universe led to be the cause of the existence of space. It is and shall ever be, and is therefore eternal. …

If one develops within him the state of akasha, he has then reached the highest point … Akasha, or space, is the Absolute. It is not composed of particles, nor is there any action in it. It is perfectly pure and unalloyed. …

Akasha is space, while avakasha is time – both widely different from each other. Time – the creation of space – may be taken as the grosser state of akasha. As a matter of fact the universe is the manifestation of time or avakasha, while God is that of akasha or space. …

At the time when there was only the Absolute, and no creation, the question of time did not arise at all. When the thought of creation got enlivened in the Base, it was perfectly free from everything. It proceeded on and, due to the effect of motion, got transformed into power, with its tendency directed towards action. But for the action it must naturally stand in need of a field or base. Now the brief pause intervening the original thought and subsequent being, or in other words between cause and effect, was already there. This can appropriately be interpreted as ‘duration’ or ‘time’, and it served for the field of its action. Thus time, having merged into the power, got itself transformed into power, for further actions towards creation.

As a general rule a thought when it becomes deep brings into effect something like a pause, which has a tremendous force. In the case of the Centre, the question of depth does not arise at all, because of perfect uniformity there. The idea of velocity of force, the direct action of the mind, was also absent there, since the Centre or the Ultimate Brahman, though Absolute, did not possess mind.

Thus whatever existed between thought and action was power, which is termed as ‘time’. The same power we too got into our share but in accordance with our limited capacity. Now, in order to utilise this power we have to merge it in the greater power of the Centre, which is all and absolute. … To my view, the science of physics cannot be taken as complete without a full knowledge of this great power which is in fact the root of all powers.

This description was written in the 1940s, based on Ram Chandra’s direct experience of the relationship between space and time and the creation of the universe. His ability to perceive such knowledge directly was because of his highly evolved consciousness. He could just as easily penetrate matter and describe in detail the internal structure of an atom without any study of physics. Likewise, the great mathematician Srinivasa Ramanujan was able to perceive pure mathematical functions in nature through direct perception, which were later proved by western empirical methods.

This capacity for direct perception can be developed by the three main yogic practices which were covered in Parts 2, 3 and 4 of this series.

The first is the removal of all of the complexities or impressions that we have accumulated by Yogic Cleaning, which is supported by Yogic Transmission. As a result, perception is purified. It is like looking through a still, clear pond to the substratum below instead of trying to see through murky turbulent water. There is clarity and discernment as a result of purifying the subtle body of all its complexities.

…perception is purified.
It is like looking through a still, clear pond to the substratum below
instead of trying to see through murky turbulent water.
There is clarity and discernment
as a result of purifying the subtle body of all its complexities.

The second process is the refinement of the functions of the subtle body – intellect, thinking and ego – so that consciousness can expand and evolve. Intellect matures to wisdom, thinking deepens to feeling and beyond, and ego lets go of its focus on ‘I’ to exist for the good of all. These changes happen through meditation with Yogic Transmission.

Expansion of consciousness is directly proportional to the refinement of ego, intellect and mind. The heavier the burden of ego, the lesser the chance for consciousness to expand.

The third process is the connection of consciousness with the Source through the heart. This is a sign of expanding wisdom and is activated like a switch through the practice of prayer.

Over time, by doing these three simple daily practices of meditation in the morning, cleaning in the evening, and prayer at bedtime, our inner capacities are awakened, including intuition from the subconscious and inspiration from the superconscious. We realize our true potential.

Mainstream science today recognizes how little of our human potential we utilise, but has not been able to give us the tools for increasing that capacity. It is the scientists of the inner universe, the great saints, yogis and mystics of the world, who have shown us how to do this. Isn’t it interesting that these great beings have often described as unscientific!

Actually the same has also been true in the world of the science of matter. Galileo Galilei is today considered to be the father of observational astronomy, the father of modern physics, the father of the scientific method, and even the father of science. Yet when he was alive he was put under house arrest for the last thirty years of his life for stating that the earth was not the centre of the universe. It is hard to believe today, but in the early 17th century he was proclaimed a heretic for his astronomical discoveries! Those who have been at the forefront of knowledge have often challenged the status quo. Thankfully, science is now starting to validate what yogis of caliber have long known as a result of expanded consciousness.

When we ponder over the great scientific discoveries and yogic findings,
the source of such research is always found in the overall
relaxed state of the individuals.

When we ponder over the great scientific discoveries and yogic findings, the source of such research is always found in the overall relaxed state of the individuals. Let us recall the great discoveries of the Archimedes Principle, the fundamental principle of gravitation by Sir Isaac Newton, radioactivity by Madame Curie, the discovery of the structure of the benzene molecule and the double helix structure of DNA. Spiritual findings and scientific findings share the same source. They are not at all opposed or different in their approach.

When we really go into them, so many spiritual practices will reveal their true scientific basis. It is only when we do not understand their significance that we become sceptics, which is unfortunate. It would be wonderful to peep into the scientific basis behind so many religious rituals which have found their place in the daily routines of many cultures. In earlier times, such expanded consciousness was only the domain of those yogics and mystics who renounced everyday life, but today it is available to all through the practice of Heartfulness. And it brings qualitiative changes to our lives. 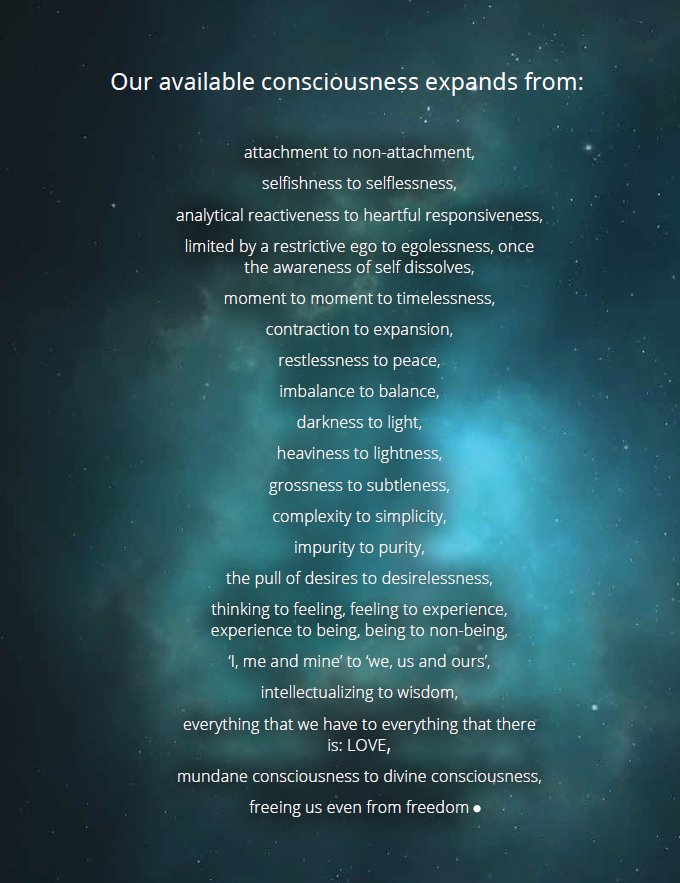 This website uses cookies to improve your experience. We’ll assume you’re ok with this if you continue on this site.