JEREMY GILLEY is a British director and actor, who founded the non-profit organization Peace One Day in 1999. Peace One Day successfully led the campaign that resulted in the unanimous adoption by the United Nations member states of the first-ever annual day of global ceasefire and non-violence, with a fixed calendar date – September 21 the UN International Day of Peace. Since then, Peace One Day has been working to raise awareness and instigate action, resulting in a large-scale decrease of violence annually on Peace Day.

Jeremy’s creativity was sparked early in life, and he has spent over twenty years serving humanity. He is passionately committed to peace, sustainability, equality, justice, diversity, inclusion, climate action and the mobilization of youth. He is the producer and director of four annual global digital experiences – Anti-Racism Live, Climate Action Live, Peace Day Live, and right now he is preparing for Peace One Day’s newest event, Space Transformers Live on December 21 an experience for young changemakers. With his signature enthusiasm and humor, he shares his vision for this event with JUDITH NELSON of the Heartfulness Institute.

Q: Hello Jeremy. How did Space Transformers come about?

JG: Space Transformers came about because Peace One Day evolved from doing just one experience a year. That one experience is Peace Day, on September 21st unanimously adopted by every member state of the United Nations exactly 20 years ago, and led by Sir Jeremy Greenstock, Chairman of Gatehouse Advisory Partners, Former Chairman of the UNA UK, and Special Advisor to the NGO Forward Thinking. We have been raising awareness to institutionalize it, because when a lot of people know about a day of peace their behavior changes and they are more peaceful.

The marketing and the awareness manifest action, and action decreases violence. It’s seriously profound the impact that a day of peace has, especially if you are one of those women or children who had been bullied or abused. The positive impact of that day in our homes, communities, schools, and places of work is phenomenal, incredible. And it’s why I work immensely hard every day, because if you tell 10 people, or you tell 10,000 people a day, then a percentage of those people are going to behave very differently on the day of peace. Wow, amazing!

Then we realized that March 21 is the International Day for the Elimination of Racial Discrimination, another day unanimously adopted by every member state of the UN. So, we approached the Office of the United Nations High Commissioner for Human Rights (OHCHR) and we now have the good fortune and privilege (which I’m very humbled by) to be the producers of the content in association with them for this International Day for the Elimination of Racial Discrimination. It is a day where raising awareness of diversity, inclusion, equality, and justice, which are so immensely important to humanity’s survival, will bring behavioral change.

Now, September 21 and March 21 are on the equinoxes, six months apart, so that left two very important dates in the calendar – June 21 and December 21 the solstices, marking the change and the end and the beginning of new seasons. Four incredible dates, and on many different levels very interesting moments of transformation into a new energy. So, I thought that we should do things on those two days as well.

Given that we were covering diversity, inclusion, equality, and justice on March 21, and peace and sustainability on September 21 it was obvious that we needed to cover the climate issue, so we created a show on June 21 called Climate Action Live. Basically, if we don’t protect resources, one sure thing is going to happen before we heat up or can’t eat – we’re going to fight over what’s left. So, no climate action, no peace. To think that we’re going to be evolved and do it differently is a lovely thought, which I’ll get up every day and believe in, but history tells us that the way human DNA functions is manifested in what we see today.

I’d like to think that we will evolve, that there will be a shift in the level of consciousness around the fundamental issues that humanity faces, and I want it to happen, but I’m not going to hang on to the idea that it’s going to happen. So, as a person who wants to generate content that is constructive and transformative, we are doing Climate Action Live.

That leaves only one area in terms of humanity’s survival as far as I’m concerned, and that is the mobilization of youth, to inspire and hear their voices. And that’s where Space Transformers comes in. So, on December 21 at the end of the year, all the themes that we have discussed during the year in the other three events – diversity, inclusion, equality, justice, climate action, peace, and sustainability – will be put into an arena for the new generation, the very people who are going to save us (should we be saved). They are the people who are transforming the space around them, for sure.

The phrase itself was something that I read in a letter from Valerie Keller, who works with Paul Polman at Imagine: Business as a force for good. I saw this phrase “Space Transformers” in the letter and thought it was such a beautiful phrase. I was really into the idea of “Let’s have a show called Space Transformers just for young people.”

Q: How old do you have to be to be part of the event?

JG: You have to be under the age of 30, so I can’t be involved [laughs]. Actually, that is a lovely thing, because as I’ve gotten older, and as Peace One Day has been on the road for the last 22 years, I’m trying more and more to pull myself out of what’s going on. I’m much more interested in generating content now for other people to be space transformers. I really want this next chapter of my life to be about raising the profile of others whose message is so key to humanity’s survival that I want to create amazing content about them.

Q: What can young people expect on the day?

JG: I’m really excited that we’ll see young people from every continent of the world. We’ve identified a young man and a young woman who are transforming space within each continent, and we’re giving them a voice to tell their stories. I’m going to make those films in the most beautiful way I can. As we hear the stories of those twelve or more Space Transformers, we will also hear from young actors who recreate the words of young people throughout history, and singers who perform and share their beautiful art. There will also be a series of panel discussions, and we will give Space Transformers Awards to a young woman and a young man somewhere in the world.

It’s the first time we’ve ever attempted anything like this. We’ve never done a show that focuses purely on young people, and I’m genuinely massively excited about it. If people have got it right, then perhaps we have 250 years left here. Some would say, “Hey, what a crazy thought,” and I don’t really know, as I’m not a scientist but an ordinary geezer with no qualifications who’s just had an idea and gone on that journey forever. Do you know what I mean? I don’t want to get off that train, as Cat Stevens-Yusuf Islam said, the peace train.

So, that’s the zone I’m in. If we have a limited time left, if we’re not extremely careful it will be because of some major decisions that will happen in the next decade. Why would we think that we are more evolved to make big decisions in these ten years than the leaders who were talking about the same crucial problems thirty years ago? I’ll hang on to the hope that they can do it, but if they can’t, we’ll hear Greta say, “All I’m hearing from leaders is blah, blah, blah.” What an amazing thing she did! That speech, that young person! It’s her perception of what is happening. I saw her say, “You talk about all these things, blah, blah, blah, but you’ve completely let us down.” She also said, “Are you going to change? It’s just words, blah, blah, blah.” There was something about the way she delivered that speech that made me go “wow!” And the truth is that we really are at an absolutely critical, crucial moment. If in the next few years, we don’t do something fundamentally different, the suffering that’s going to come our way will be terrible, irrespective of whether we survive it or not. And that’s the sad reality. It’s just what is. I’ve traveled for 22 years in 133 countries, and I’ve seen the results of human behavior. I wish I hadn’t seen it. It’s a very, very serious time, so I’m really into what Space Transformers can do.

Q: Many young people feel like they aren’t being heard, so your initiatives are certainly providing them with an opportunity to be heard.

JG: I think Greta Thunberg summed it up quite nicely with the words, “Blah, blah, blah,” didn’t she. What a legend, what a woman! My goodness. That’s what the young people are teaching the older generation. And let’s hope the older generation makes some very crucial decisions at this point. That’s very, very important.

We do see some great changes. There are extremely constructive, positive things going on, and things are transforming. The question is whether they can transform fast enough. The academics tell us that the window of opportunity is now. That’s the conundrum, that’s the issue. Can they do it fast enough? Have they got the courage? Can they look beyond their own borders?

Q: How can people sign up, and will there be any activities leading up to the event?

JG: Four to six weeks before December 21 we’ll announce who’s going to be there. We hope that many young people will tune in to watch the show live at www.peaceoneday.org or @PeaceOneDay on Twitter. I hope that we will all watch it together.

It’s a moment to hear and reflect, and be inspired to act, leading to engagement. I think the action is going to be people tuning in and listening to young people’s voices, so that everyone can support them, and be inspired by them, and then go on their own journey. It’s a really beautiful and creative thing to give them a voice and showcase these films for their social media. I really love the idea of being a broadcaster of great people’s thoughts and stories. How beautiful, what an honor.

If there is an annual experience at the end of every year,
an experience that culminates from thinking
through the seasons and reflecting on the year
as we prepare for the next season,
it is a very exciting thought.
I’d like all those experiences to grow,
because narrative is everything; storytelling is everything;
informing, inspiring, and engaging is everything;
it’s the best thing we can do. 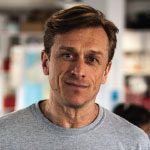 After a successful career as an actor and filmmaker, Jeremy founded the non-profit organization Peace One Day. Because of his efforts, in 2001 a UN General Assembly resolution was unanimously adopted establishing September 21 as an annual day of global ceasefire and non-violence. Today, billions of people have been exposed to the peace message, resulting... Read more