Home› It changes everything› The importance of gestures in communication

ANNIE MURPHY PAUL is a journalist and author whose books include Origins: How the Nine Months Before Birth Shape the Rest of our Lives, The Cult of Personality Testing, and The Extended Mind: The Power of Thinking Outside the Brain. In part 2 of this interview by UDAY KUMAR, she speaks more about interoception and self-awareness, and how gestures and physical expressions are as important as verbal communication in helping our children to learn.

HOW TO NURTURE YOUR CHILDREN’S INNER STRENGTHS – PART 2

Q: As you do research on the extended mind, what do you think about the role of mirror neurons?

AMP: I don’t refer to mirror neurons. I am not convinced that we know enough about how they operate and how central they are to the processes of empathy and communication. And I don’t think it is necessary to understand. I say this in the book: Humans naturally engage in mimicry, subtle automatic miming of each other, when talking face to face. It’s by making those expressions and gestures, and by assuming the postures of the other person, that we then read off our own bodies what those postures and expressions make us feel. That’s how we get access to what another person is feeling and thinking. Research has found that people who are more attuned to their own internal signals can be more empathetic because they then feel more acutely the signals they read from the other person. I am fascinated by processes like this in which humans bridge the divide between us, so we are not as separate as we think we are. So in my case I didn’t feel the need to draw in the research about mirror neurons.

Q: You also touch upon sensing, labeling and verbalizing of emotions. One of the core practices of many meditation systems, including Heartfulness, is journaling at the end of a meditation sessions.

Q: We observe ourselves at the physical, mental, emotional, and spiritual levels, and train ourselves in the vocabulary of journaling. We develop the capacity to have one eye always looking inward while looking at another person. We learn to become adept at witnessing through meditation and journaling.

AMP: So, I would like to know your thoughts on any research you have come across on journaling and how it helps.

That sounds like a really fruitful exercise, and it makes me think of two areas of research I write about in the book. One is around interoception. There is a suggestion that the most effective way to use those interoceptive sensations is to alternate or oscillate between attending to the outside world and attending to the inside world, so that you’re getting a constant infusion of information from both places. You don’t get lost in the internal sensations, but you are not so focused on the outside that you are not in tune to what is going on inside. That is an effective way to gain wisdom from both spheres. It sounds like journaling might facilitate that.

The most effective way to use those interoceptive
sensations is to alternate or oscillate
between attending to the outside world and
attending to the inside world, so that
you’re getting a constant infusion of
information from both places.

Second, it is very useful to take the mental contents of the brain and put them out into physical space, whether it is on a whiteboard, post-it notes, or a field notebook. I have read about how important field notebooks are to scientists. Although it may seem that a thought in our head and a thought we write down on a page are the same, they really are different – what psychologists call different affordances. We can do different things with them. Once we put a thought down on paper, we can inspect it with our senses. We can look at it, we can read it out loud, we can change it around, we can manipulate it in ways that remain inert when it is inside our head. In journaling, we externalize our thoughts and feelings so we can look at them in the moment, and we can also revisit them later in a way that is difficult to deal with if it remains in our head. I think it is a really productive and fruitful exercise.

Q: My teacher says that when you are on a hike, if you look back every few yards, you won’t know how much ground you’ve covered, but when you come to the summit you will see the whole thing. He says it is exactly like that when you read your journal from three years ago. You see what thoughts you were getting in meditation, and how observant you were of your own inner environment. That’s a good way of gauging your own progress, of tracking your inner progress and figuring out how it is coming along.

AMP: It is remarkable how difficult that is to do if you don’t write things down. It is hard to remember how you were three years ago. And that is a useful difference between an external resource like paper and pen or a computer file and our brains, which are always transmuting and changing our memory, often in a fruitful and productive way, but not in a way that keeps things as they were. We need something that is kept as it was so we can push against it or remember how things were, which is what the brain is not meant to be. The brain is not good at being a fixed and unchanging record of what happened.

Q: I am taking a jump here, but the better we are at our own interoceptive reading, the better we are at reading others, too. Not in terms of getting into their minds, but feeling what they are feeling, understanding what they are going through, and that’s how we can communicate better with people. It starts with “me,” but if we are honest with our own changes, then it radiates outward in concentric circles.

AMP: I think that is absolutely true, in a way that if we stayed locked inside our own head we wouldn’t be able to make that connection with other people.

Q: Can you talk a little bit about your research around meditators and the ultimatum game?

AMP: I was just fascinated by some research I came across that seemed to push against the very common and old idea in Western culture that it’s the brain that is rational and the body is an unruly, irrational animal-like entity, and the rational brain controls this unruly body. What was so fascinating to me about the research on the ultimatum game is that the body can be more rational than the brain.

In the experiment, groups of participants were asked to play the ultimatum game, where there are partners. One partner has control of the kitty of money, and they decide how much to offer their partner. The expectation of the partner generally is that growing out of reciprocity the other person will fairly divide the kitty in half.

Often, however, the offering person gave their partner less than half and kept more for themselves.

What was so fascinating to me about
the research on the ultimatum game is
that the body can be more rational than the brain.

The rational thing for a recipient partner to do was to take whatever was offered: If they were given one dollar, that was one dollar they would not have had otherwise. But because they had a social expectation of reciprocity, often the people who were offered less than half, or less than what they thought they should get, refused it out of spite, almost to say, “If you are not going to give me what I think is fair, I am going to spite myself by not accepting that offer at all.” So that’s very irrational in a sense.

The research found that long-time meditators were:

And in people who did not meditate it was the prefrontal cortex that was active, which is the part of the brain that makes judgments and decides when something is fair or not. In other words, those people who were meditators, and probably more attuned to their bodies, were making a more rational choice in this economic game than people who were using their heads. I found that result really fascinating.

Q: Me too! My interpretation of that study was that as you meditate, your ego becomes more humble and grounded. If you think of the ego as a spectrum, one extreme is humility and the other is arrogance, and you are somewhere in the middle. You may not think it’s fair, but you accept and move on.

AMP: Right! I don’t have to put my big ego out in front and let it make all the decisions.

Q: I would like to ask you more about gestures, especially for children. I was familiar with the word gap study by Hart and Risley, and I come from the Indian culture where everybody talks to their children all the time. What I hadn’t understood, and what you called out, was how important gestures are for a child. I still remember my grandmother and her gestures. She was very animated, and it did something. Can you talk about gestures and their role in our lives?

AMP: That’s a lovely memory. It must have been very engaging to listen to her and watch her. You got the full helping at the start of your life!

What’s interesting is the idea of a gesture gap. In the Hart and Risley study, they found that affluent children may hear as many as 30 million more words by the time they start school than less affluent children. This word gap has an enormous implication on how they perform in school. Research now shows that gesture is similarly important for building vocabulary and later academic success. We see a similar effect on how much affluent parents gesture with their children and how much less affluent parents gesture with their children. We can say there is a gesture gap along with a word gap, which may be just as significant.

And the good news here is that with a little bit of training and awareness raising, parents from all socio-economic groups can employ more gestures in their interactions with their children. For example, when they are reading a book with their children, pointing with their finger, or making a cat gesture when they are talking about a cat. Those gestures made by parents lead children to make more gestures, and later on it shows up in a larger spoken vocabulary for the children.

This is just another example of how we are so focused on verbal language that we don’t focus on gesture. Once we know the importance of gesture, however, we can bring it onto our parenting practices

Q: Amazing! I love it because it shines the light of science onto something we take for granted.

Thank you, I really appreciate it.

AMP: Thank you for reading the book so carefully, and for having such thoughtful questions. I really appreciate it. 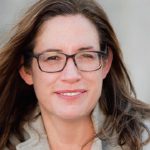 Annie is an acclaimed science writer whose work has appeared in the New York Times, the Boston Globe, Scientific American, Slate, Time magazine, and The Best American Science Writing. She is the author of Origins and The Cult of Personality, and her TED Talk has been viewed by more than 2.6 million people. A graduate... Read more