Do you remember last month’s gruesome story? Dear King Madhukar and his adviser both lost their heads in Parvati’s temple, and Queen Kumudini revived them but matched the wrong heads with the bodies. King Vikram asked, “Tell me, little bracelets, to whom is Queen Kumudini rightly married?

Here is what some of you had to say about this:

The bracelets clinked softly and said, “In truth, the husband of the queen was the one who had the king’s body because the body is stronger than the head!”

At these words, Queen Abol-Rani uttered an exclamation of rage and said, “This is wrong and stupid!” She tore her bracelets and threw them to the ground. “You are not worthy of me, bracelets! The queen belonged to him who had the king’s head.

The head is the most important and noble part of the body, it is what distinguishes a being from another and it is the seat of reason!” King Vikram replied, “There you are very sure of yourself, O Queen. Are these your last words? I will tell you the rest of the story.”

Queen Kumudini was mortified, and she did not know whom or what to trust. Her hands recognised the body of her beloved, her ears heard his voice, and yet he had the head of the adviser. On the other body, her eyes recognised the face of her king, but even his voice was not his. 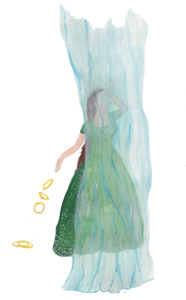 So she chose the body of her husband, not because of his strong physical body, but because it held his heart, the seat of his soul. She saw it in his eyes and in his presence. If the brain is the seat of reason, the heart is the seat of wisdom. It is the wisdom that guides our steps more than reason.

Vikram had barely uttered these words than the third veil fell by itself, and the queen was hidden from the eyes of the king only by the very last one. “I will now tell my fourth and final story,” said King Vikram. “If you do not answer me, O my Queen, probably your emerald ring shall in your place.”

This time the young girls did not laugh, as they had come to know King Vikram and they were well aware that if he wanted the ring to reply, it would reply. And indeed, the emerald ring produced a dark green flash and answered, “I am listening, King Vikram and I will answer you!”

In a kingdom far to the south, there reigned a good and righteous king. But in the country, a revolt broke out led by treacherous courtiers. The king, queen and princess had to flee their country at night. They reached the neighbouring kingdom and were continuing their journey in the middle of a dark forest when they were surrounded by a savage tribe of hunters who haunted the border regions.. 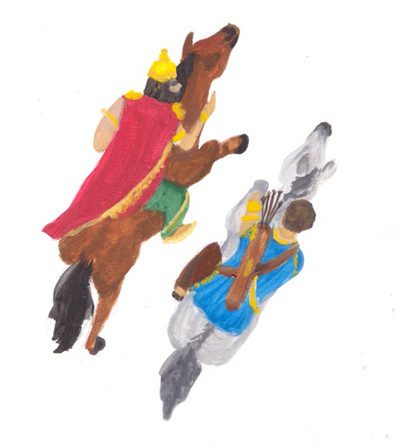 The king fought like a lion, but his opponents were so many that, despite his valour and skill with a sword, he was defeated and killed. The queen and the princess had hidden in the bushes. When the fight was over and the hunters had fled, they walked away from that inauspicious scene, crying. They did not stop until they reached the edge of a charming little lake where thousands of lotus flowers grew, far away.

At that moment, the king of the land was hunting on horseback with his son. When they saw two sets of light footsteps on the ground in front of them, the king said to his son, “Two women have been here. Let us find them and we will each choose the one that pleases us.”

The king agreed, they spurred their horses on and followed the tracks. In an instant they reached the lake and saw the queen and princess who were resting on the sands of the shore. 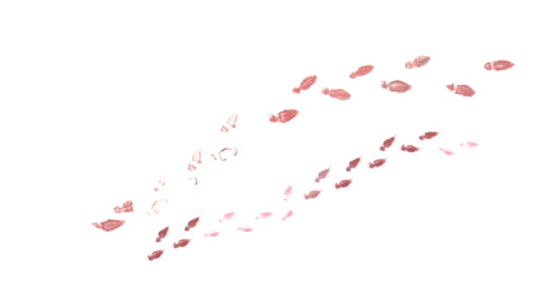 When the queen saw the two riders, she stood up, terrified, taking them for robbers: “My daughter, quickly, flee, flee!”

“No, mother, be reasonable,” replied the Princess. “These are not thieves, but two hunters, and we can ask them for help.” Meanwhile, the king and his son had arrived near them, jumped from their horses, and the king said, “Who are you who rest near the lake with no one to protect you? Where do you come from and where are you going?”

The unfortunate queen told him their terrible misfortune.“I understand,” replied the king. “My son and I would like to take you as wives, as my wife is long dead and my son is still single. What do you think? Would this have your approval?” 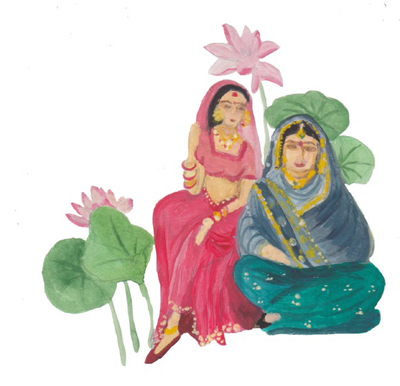 The queen and the princess remained silent and contented themselves by bowing their heads modestly. The prince hastened to add, “My father wants as his wife the one who has the biggest feet. I will take the one who has little feet. We decided while we were following your footsteps.” “Perfect,” laughed the princess. “Only, my mother has smaller feet than me.” “That’s good, indeed!” laughed the king. “A word is a word and a man never denies a commitment.” He was delighted to marry the young girl while his son had to content himself with the mother.

The queen and the princess were quite happy with the idea of finding a home again and, after some thought, they agreed. The prince did not say another word. Some time later, the double wedding was celebrated with great pomp and ceremony. Life went on.

Having finished his story, King Vikram asked, “Tell me, emerald ring, what were the degrees of relationship between these children?

”The emerald ring again produced a dark green flash and replied, “Really, I cannot answer you, King Vikram. I do not know.”

At these words, Queen Abol-Rani gave an exclamation of satisfaction and declared, “Good! You, my emerald ring, are worthy of my wearing you! You were not ashamed to say that you did not know when you did not. It is not possible to give a sensible answer to this question. The intellect will lose us by wanting to create complicated mental constructions. To such question one should not reply.”

Hardly had she uttered these words than the fourth and final veil fell by itself and Queen Abol-Rani appeared before King Vikram’s eyes in all her unearthly beauty.

And so, Vikram saw Abol-Rani and Abol-Rani saw Vikram. Their eyes melted into each other. There were only two souls contemplating each other. Vikram knew that Abol-Rani was the one that he had been waiting for his whole existence. Everything also became so clear and simple for Abol-Rani’s heart, submerged by gentle waves of love.

She bowed before him and said, “You are welcome in my palace, King Vikram. You are the first man who has cast eyes upon me.  In truth, you even showed me that my attitude was haughty and could cloud my judgment. It was covering my heart with a veil of illusory certainties. Be welcome, King Vikram!”

She rose from her silk sofa, advanced towards the king and offered him her hand. Vikram took her to his palace and married her there.