SMRITI NARAYANAN is a high school senior from Austin, Texas, who enjoys researching the various impacts music, the environment, and interactions have on the human brain. Here she explores the soothing effect of the sounds of nature.

Think of the soft pitter-patter of raindrops and the gentle tumbles of a stream nearby. Think of the shrill chirps in a birdsong and the whoosh of the leaves blowing in the wind. What do you associate these sounds with? How do they make you feel? These sounds of nature invoke a sense of comfort and ease. This is something common to all people, but why is it so? Actually, there’s a science behind why these sounds make us feel relaxed.

A study conducted by Buxton, Pearson, Allou, Fristrup, and Wittemeyer (2021), published by the Proceedings of the National Academy of Sciences furthered the theory that natural sounds relayed a positive correlation to quantitative and measurable health benefits. The study identified 36 publications in which “decreased pain, lower stress, improved mood, and enhanced cognitive performance”1 correlated with listening to natural sounds.

From this, they identified an environment in which there was decreased human disturbance – parks. Environments with reduced noise pollution allowed people to perceive animal, water, and wind sounds. As the researchers looked more deeply into various sounds, they found that water sounds had the largest mean health benefits and positive outcomes. When they compared natural sounds to human noise, they found a similar outcome. Their results demonstrated the calmness and joy brought to those who experienced and perceived the sounds of nature.

Having more calmness and joy in one’s life can lead to reduced stress, anxiety, and brain fog.
In environments with increased human noise pollution, such as cities, towns, and suburbs, we don’t perceive sounds in our environment because our attention is focused on other singular sounds or sights, like a voice or a person. Human-made sound is referred to as noise whereas environmental sound is simply natural sound. When we do get the chance to listen to the sounds of nature, it’s almost as if we’ve taken a pause from the world around us.

One reason why humans find the sounds of nature soothing is because of their connection to music.

The basic elements of music are derived from sound and rhythm, which are found in nature. Take, for instance, a bird song. The sounds of the bird create a song, just as notes connect to make a song on an instrument. Rhythm is seen in nature through drops of rain hitting the ground. If you listen to the peck of the woodpecker, you will find a rhythm. Many renowned musicians like Vivaldi, Beethoven, Handel, and Debussy were inspired by nature. If you’ve ever listened to Vivaldi’s Four Seasons, you can distinguish the different moods of music used to portray the change in nature. Essentially, we’ve discovered that music and nature are one. The music we find soothing today wouldn’t exist without nature-derived sounds and rhythms.

In addition, the way humans interpret the soundscape can have an effect on emotions.

Studies have shown that nature can affect the psychological development of an individual. Though it is important to note that not all sounds affect humans in the same way. Due to various experiences and memories, different sounds can evoke different emotions. Various sounds can evoke certain recalls in the human mind, correlating to positive (and sometimes negative) feelings. The way in which our mind reacts to these auditory stimuli is what we show through emotion.

Natural sounds have an overall positive effect
on human health. The long term benefits of stress relief
and reducing anxiety are numerous including sleep improvements,
reduced muscle tension, and an overall better quality of life.

Kanha Shanti Vanam, an ashram in Hyderabad hosting the world headquarters for the Heartfulness Institute, is an ecological paradise where you can resonate with inner and outer nature. The Green Kanha Initiative aims to utilize this space to nurture biodiversity and this is accomplished through the conservation of hundreds of endangered and indigenous species of plants and animals. In addition to being a meditative space, Kanha Shanti Vanam has become a conservation site and home to these flora and fauna. Here people can experience the sounds of nature all around them whilst practicing meditation. If you’re looking to implement natural sounds into your meditation and mindfulness routine, you may consider visiting this ashram.

For the most part, we’re able to say that natural sounds have an overall positive effect on human health. The long term benefits for stress relief and reducing anxiety are numerous, including sleep improvements, reduced muscle tension, and an overall better quality of life.

Some strategies for accessing natural sounds on a daily or weekly basis are to take some time to step outside, be away from the bustling sounds of an urban environment, and connect with nature. Whether it’s in your own backyard, the local park, or a national park, the sounds of nature surround us. If you don’t have the luxury of stepping into nature, there are thousands of relaxing audios and natural sounds found on streaming platforms. By simply implementing any one of these strategies, you could take small steps towards daily stress and anxiety relief. 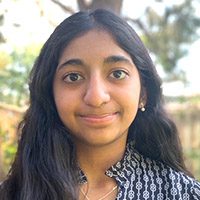 SMRITI NARAYANAN is a high school senior from Austin, Texas, who enjoys researching the various impacts music, the environment, and interactions have on the human brain. Here she explores the soothing effect of the sounds of nature.