In 2017, KAMLESH D. PATEL continues his series on the evolution of consciousness, with an article on the paradox of stillness that manifests with an expanding and evolving consciousness.

THE SCIENCE OF SPIRITUALITY
Series: The Evolution of Consciousness

He who can no longer pause to wonder and stand rapt in
awe, is as good as dead; his eyes are closed.
—Albert Einstein

The above quote of Einstein resonates with some ideas I have been thinking about lately on consciousness. Imagine a beautiful flower blooming in the garden. If you run past it you will not be able to appreciate its beauty, whereas if you are walking by you can enjoy it more, and if you stand still in front of it you will appreciate its beauty even more. If you are flying, then you will not even see the flower below you on the earth. So when we are moving rapidly, we miss out on many things.

Now what is that flower? It is your soul.

Let’s explore this idea further and ask a question: is it possible to move at speed and still be present in each moment? Can we reach a critical speed where we stand still in movement?

To understand this better, let’s revisit the diagram we have of the various bodies of a human being.

The soul is the center of our being, around which we have the four main subtle bodies that we know as the mind. The first is consciousness, the canvas that is the field or fabric of the subtle body. Then there is the ego, which is our identity, so it is also deeply entwined with the individual soul. Then comes intellect, which allows us to discern and make choices, and then at the surface level of the mind we have the thinking function. And then there is the physical body, which is the outermost layer.

Now settledness does not mean inactivity;
in fact it is activity at a dimension
we have never conceived of before.

If noticed keenly, it is always the ‘subtle’ that supports the ‘less subtle’ in its wake. The soul is the subtlest, followed by consciousness, ego, intellect, mind and finally the physical body, and hence the origin of the sequence in the order mentioned above.

Think of a wheel. The very centre of the wheel is quite steady, without movement, whereas the circumference of the wheel experiences maximum movement. Similarly, the center of a tornado, the eye, is in utter stillness. If you want to be calm, position yourself in the center of the tornado and keep moving along with it, and then nothing will affect you.

And what is our center, around which the vortex of life exists? …

Let’s explore the physical end of the spectrum. The five senses are given to us for a noble purpose, but we are so busy using them for our pleasures at the physical level that we misuse them. For example, we have eyes so that we can look around and protect ourselves and see things better; that is their main purpose. But we use the eyes for a different purpose that is desire-based, drawing us outwards, creating a vacillating mind and disturbance. Then we are unable to focus on our center. If we focus on the steadiness of the soul, we will stay centered.

Consider it from another angle: the earth is revolving around the sun while spinning on its own axis at a very high speed. If you are seated at the Equator you will have maximum exposure to that movement at almost 1000 miles per hour,  whereas if you are at the North Pole you will feel as if you are stationary, as you are on the top of the axis. So the key is to find that axis within yourself.
How is this possible? It is possible only when you match your movements with those of your axis. And what are those movements all about? The ability of your mind to settle down. 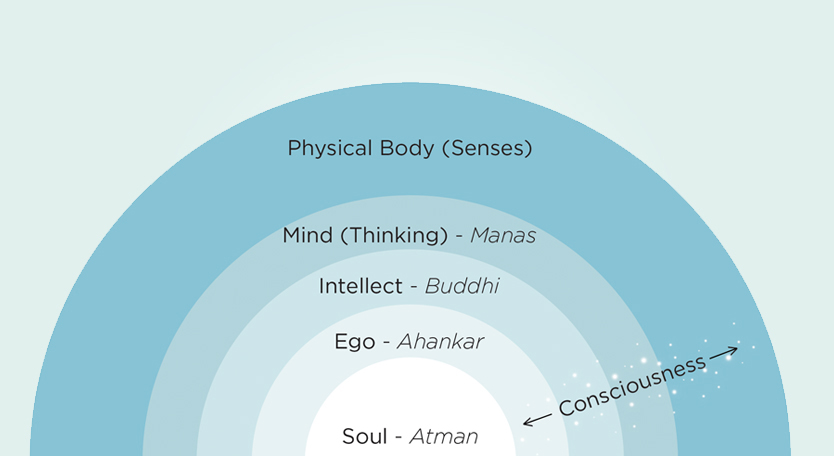 So settledness is the key. When you meditate you must feel settled. Or putting it another way: if the meditation is done correctly you will automatically feel settled.

Now settledness does not mean inactivity; in fact it is activity at a dimension we have never conceived of before. When you have a subject to study, a business venture to work upon and a conversation with your child, your mind should be steady on them. At the same time your mind should also be steady on any other thing that you need to attend to. The steadiness should be there. It is not that when you are fully attentive to one thing you are less attentive to another. One does not rob your mind of capacity for the other.

It depends on how you develop your capacity to expand your consciousness. As you progress, you will not feel that you are thinking or contemplating, as it just becomes a part of your nature. It is like developing any other capacity. For example, when little children have to add 2+2 a lot of thinking is involved, but as a teenager you can have a complex equation in your mind and work on it, no longer needing to think. You are able to contemplate. When you advance a little more, you are neither thinking nor contemplating, as the answer comes just like that.

The nature of the soul is movement and thinking, and in the early stages of a spiritual practice, you learn to focus and think clearly. Later on comes expansion, which means you develop 360-degree consciousness. Still later, when you reach higher realms of human consciousness, it is as if you are everywhere at the same time. Consciousness is of a nature where you have gone beyond expansion, and that is why there is stillness, which happens when things are moving extremely fast.

So let’s look at it from the perspective of infinite movement versus perfect stillness. What is infinite movement? We can understand this by considering the physics of movement. If you go from Detroit to New York by car, you will go at a certain speed; let us say you take 8 or 9 hours. If you take a flight, you will arrive there in an hour and fifteen minutes. If you take one of those old supersonic flights, by the time they announce you are taking off you are already landing. If you fly at the speed of tachyon particles1, you can be in New York and Detroit at the same time. Now why is this relevant to infinite movement?

When we go beyond certain frequencies in Nature, it seems as if there is nothing happening because of the enormity of the speed with which things are moving. You can think of it like a child’s spinning top. When it is spinning the fastest, and is perfectly balanced, it looks as if it is not moving at all.

As we move inwards towards our center, something similar happens; we become subtler. As we become subtler and subtler, the frequency within also changes. The transformation follows the progression from matter to energy to Absolute. In such a profound state of being, it appears as if nothing is happening inside. But actually so much is happening at the same time! The 360-degree awareness is so rapid that it is almost real time.

For example, even before another person speaks, you have felt what they are going to say, understood and responded. Nothing is holding your mind, or you can say that your mind is able to settle on everything simultaneously. You can be absolutely settled on your spirituality, and you are also settled on your business decisions without becoming either disturbed or elated about them. There may be a hundred things that you are planning in your life, but if you have the ability to move from one to another at lightning speed, why worry?

The idea of all yogic practices is to make the mind still and steady so that it can resonate with the stillness of the soul. So all our efforts towards the eight steps of Patanjali’s Ashtanga Yoga – yama, niyama, asana, pranayama, pratyahara, dharana, dhyana and samadhi – are for the single purpose of creating stillness in the mind.

This is the state known as sahaj samadhi, and to achieve this state is why we meditate.

1 Purported to travel faster than the speed of light