Home› Environment› The tree of life and fertility

DR. V. RAMAKANTHA shares some insights into the science, history and mythology of the Banyan tree, also known as the Bengal Fig or Indian Fig. The Banyan is one of those mythical trees that has had an important place in the life and history of the people of India since ancient times. It is also home to many species of birds, animals, and epiphytic plants.

The Banyan or Bargad tree, Ficus benghalensis L., is an evergreen with a deeply fluted trunk and horizontal branches that grow to huge proportions. Aptly called Bahu Paada in Sanskrit, meaning a plant with many feet, the Banyan has aerial roots, which grow down and penetrate the soil, supporting the massive weight of its spreading branches. With its canopy of thick, dark-green leaves year-round, the Banyan occupies more and more space every passing year. As flowering and fruiting take place across seasons, it offers food for many species, making it an ideal home for birds and small animals. This colossal ornamental plant is the National Tree of India.

The Banyan in Mythology and History

The Banyan is known in Hindu mythology as the tree for fulfilling wishes (Kalpavriksha), and the tree of life and fertility. With its unique ability to spread in an ever-widening circle with the help of its aerial roots, the tree achieves a long lifespan. In this world of evanescence, it has become a symbol of stability, constancy, and permanency, and represents immortality.

The Vedic fire ritual known as Yagna, is a process of burning plants and herbal medicines to purify the environment, and the twigs of the Banyan tree are invariably used. The sacredness of the tree also comes from the ancient stories that it was the residing place of Lord Kubera, the god of wealth, and Lord Krishna used to rest on Banyan leaves.

The tribal people of Maharashtra and Telangana, Pardhans, who are traditionally bards and singers, consider the hanging roots of the Banyan tree to be the long and matted hair of their Guru, Jalranda. The story goes that after he passed away, Guru Jalranda was buried under a Palasa tree (Butea monosperma), and later a Banyan tree emerged out of his grave. In a dream, Guru Jalranda revealed to his eldest son that the Banyan emerged out of his body, and he commanded that it must be served and revered. Needless to say, Pardhans hold Banyans tree to be sacred and protect them.

In this world of evanescence,
the Banyan has become a symbol of
stability, constancy, and permanency,
and represents immortality.

For some tribal people of Odisha, the trees are shrines of the gods, and it is sacrilege to cut them. Such belief is prevalent amongst most communities of India.

The Banyan has been introduced into several other countries in Asia. It is considered sacred in the Philippines, where many people believe that it is a home for both benevolent and evil spirits. It is customary not to point a finger directly at a Banyan tree, as it may offend the spirits dwelling in it, a belief often shared in South India. In Indonesia, the Banyan tree has become a symbol for unity and power. There, people have built shrines beneath gigantic Banyan trees.

A colossal Banyan tree begins its life from a minute seed, and as an epiphyte the plant grows on another plant. When the scarlet red fruits of the Banyan are enjoyed by birds and animals, those tiny seeds pass through their alimentary canals unharmed. The seeds germinate in cracks or crevices of other trees, which often results in the hosts’ death. It is no wonder that in Buddhist literature the Banyan tree is often used as a metaphor for lust overcoming humans.

In 1989, a Banyan tree in Anantapur District of Telangana State, India, was recorded as the largest tree specimen in the world in the Guinness Book of World Records. Its canopy covered 19,107 m2 (4.721 acres).

Parts of the Banyan are used in traditional medicinal practices, such as Ayurveda, Unani, Siddha, and Homoeopathy. In Ayurveda, it is one of the PanchaValkala (five barks) used in treating various human ailments. The Banyan plays an important role in the treatment of diabetes, and gynecological and fertility issues.

The bark is prepared as an infusion, to be used as a tonic, while a decoction is used in treating vaginal problems. During pregnancy, the tender leaves are boiled in water and administered orally to strengthen the uterine muscles.

The bark and aerial roots are used in treating diabetes. The decoction is also gargled frequently to counter bad breath and mouth ulcers. The tender aerial roots are chewed and used as a toothbrush.

The aerial roots are also pounded and consumed with buttermilk to cure diarrhea, and the leaf buds are boiled in water for the same purpose. A paste made out of Banyan bark is a remedy for sunburn, as it gives an excellent cooling effect and reduces the burning sensation when applied.

The Banyan plays an important role
in the treatment of diabetes, and
gynecological and fertility issues.

It is considered to be one of the best remedies for controlling hair fall. 300 grams of dried and powdered aerial roots are immersed in one liter of coconut oil for fifteen days. After straining, some of the oil is applied to the scalp before sleeping and is washed out the next morning.

The milky latex of the Banyan is used to overcome bad breath, gum infections, and for strengthening loose teeth. The latex, which is obtained from the leaves or branches, is mixed with honey and applied to the gums, rinsing with lukewarm water after ten minutes.

A few drops of the latex are taken orally with milk in the treatment of bleeding piles. The milky latex is also applied to bruises and cracked soles, and to relieve rheumatic pains. Banyan fruit and its juice are used in rheumatism and also in cases of pain in the muscles and joints of the lower back (lumbago).

The leaf powder mixed with coconut oil is applied to wounds. The fruits are eaten raw to cure problems relating to bile production and the bile duct. The seeds are used in curing excessive urination.

Nyagrodhadi Kashayam, Sarivadyasava, Ushirasava, and Paranthyadi Taila are some of the Ayurvedic medicines containing Banyan as a major constituent.

What Does Science Know About the Banyan Tree?

An article published in the British Journal of Pharmaceutical and Medical Research (Tadulkar, 2015) supports the anti-rheumatic, anti-inflammatory, and anti-diabetic properties of bark extracts of the Banyan tree. A phytochemical investigation published in the International Journal of Pharmaceutical Research and Analysis (Shiva and Singh,2018), revealed the presence of as many as 63 phytochemicals (including two new ones) in the tincture of the stem bark of the Banyan.

A number of scientific publications advocate the presence of many phyto-constituents with a wide spectrum of biological activities, justifying the use of different plant parts of the Banyan in combating various diseases, environmental stresses, and maintaining human and animal health. Most authors hold the view that a lot of research is still needed on this important plant.

The Enigmatic Tree of Ecology

Recent ecological studies have also added to the mystery of this tree. The gigantic Banyan tree is entirely dependent on a miniature wasp for its perpetuation, and the wasp too cannot survive without the Banyan trees. Only one species of wasp, Eupristinamasoni, can pollinate the inverted flowers or synconium, which are concealed within the figs. The intricate relationship between the mighty tree and the miniature insect serves as an extraordinary example of adaptation and co-evolution between plants and animals. In fact, the Banyan does not yield viable fruit in cold countries where the wasp does not exist.

Other Uses of the Banyan

The wood of the Banyan is used for door panels, well curbs, furniture, and boxes. Paper is made from the bark and the leaves make good fodder. The sap is used to produce shellac, a strong adhesive. It can also be used to make surface-finishers and for polishing brass and copper.

In the olden days, during family gatherings and functions, people would eat on Patravali, organic disposable plates made with the leaves of selected trees like the Banyan. These plates are still very popular in rural regions of Uttar Pradesh, Bihar, Jharkhand, Odisha, West Bengal, and Karnataka. In some parts of Karnataka, Banyan leaves are used for wrapping idli batter, which is later on steamed. The tender leaves of the Banyan are used as food.

A lot of research is still needed
on this important plant.

A Recipe for Banyan Chutney

Chutney made of tender Banyan leaves and other ingredients is an excellent source of Selenium, an element that plays a crucial role in metabolism and thyroid function.

Heat 2 tbsp of ghee in a pan and add cumin seeds and peppercorns. When they splutter, add Banyan leaves, and fry them over a low flame until they become crisp. Cool the mixture and grind them with coconut, adding a little water. Add the buttermilk. Season with mustard and curry leaves. Add salt to taste. It goes very well with steamed rice.

Seeds from bird droppings serve as an excellent source for raising new Banyan plants. Branch cuttings can also be planted. There is also translocation – a massive Banyan tree that was rescued and translocated from the Thumkunta area of Hyderabad has bounced back to life in Kanha Shanti Vanam. 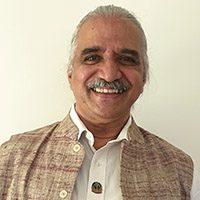 Ramakantha was a Principal Chief Conservator of Forests in the Indian Forest Service. He is an academic, author, and wildlife photographer, who manages species-rich ecosystems in India. He is also a member of the Heartfulness Green initiative at Kanha Shanti Vanam.