In accordance with the promise they had made as children, the three brothers, Polo, Jack and Danny met again ten years later in Montpellier. Polo and Jack had, by now, already told their stories. Danny was twenty-two. But what had he done during all these years? Nobody knew.

From Montpellier, the three brothers took a small country train to Serverette to see Sister Mary Magdalena, and this gave them plenty of time together to share more of their stories.

“Come on Danny, it’s your turn now. Have you had any extraordinary experiences?” 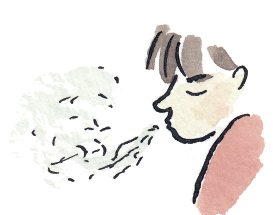 “Well! You know, I have been studying mostly.”
“We can remember as a kid you used to chase butterflies! You would have long bike rides with your friend in search of rare butterflies, wouldn’t you?”
“Oh, butterflies! Yes!” exclaimed Danny. “Do you want to know why? During our first years at the orphanage, I missed mum terribly. So I used to sigh. One day, as I sighed deeply I felt a wave of love filling my heart. It was a strange mixture of sadness, sweetness and love. Like a sour candy that leaves a sweet taste in your mouth at the end. The sweetness of that tender motherly love was appeasing the bitterness due to separation. Then I tried to sigh a second time to feel it again, but it didn’t work anymore. So I said to myself that there must be sighs everywhere in the countryside, under the trees, behind the bushes, near a fountain, or even under a gutter, and that if I could catch them I would fill my heart with our mother’s love. 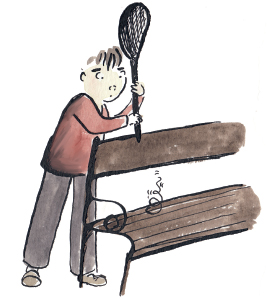 “I made a net for capturing sighs and started chasing them. I heard plenty of sighs – under the park benches, in churches, in public gardens, in gazebos, under the lime tree in the village square, near barns and by the river. So many sighs: long, languid sighs; short, exasperated sighs; desperate sighs; deep sorrowful sighs; sighs of exhaustion; and some whispered loving sighs. But the latter were rare and rather difficult to catch.

“Yet I found them. I caught some in my net, but when the wind blew there was a ‘whoosh’ and they were gone! Although I could find and hear them I couldn’t catch them. The old men sitting on the park benches asked me what I was looking for. When I told them about my hunt they smiled and said, ‘You’d certainly be luckier with butterflies! Don’t we say that love is as light as the flight of a butterfly? Do you know that?’
‘I don’t. Why?’ Danny asked, his curiosity awakened.
‘Love is like the flutter of a young mother’s eyelashes as she bends over her baby’s cradle. Once a young mother from Rieutord, a nearby village gave birth to an extremely fragile baby girl. She was so frail that it could hardly breathe. The whole family took the greatest care of the baby. But one morning, she just ceased to breathe. The mother was desperate. She clasped her baby to her bosom and she cried, she sang, she prayed and she wept. Her face was close to her baby’s face. “Oh! Ye, the vital force! Please, stay with my child,” she begged.

“‘The mother’s eyelashes started fluttering faster and faster, shedding the tears that were filling her eyes. Then, through her misty eyes she saw a sort of fuzzy eiderdown surrounding her baby’s head. As she looked closely she could make out that there were tiny creatures with small wings on their backs buzzing around the baby. 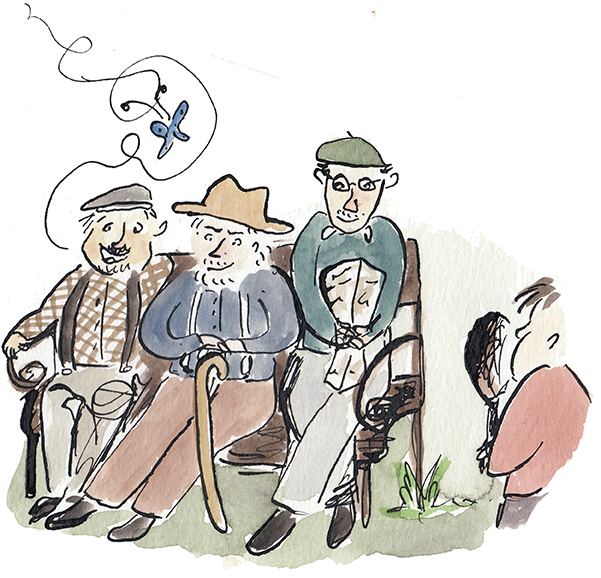 “‘Mother Michèle says that these creatures are called devas. There were over twenty of them around the baby’s face and they were flapping their tiny wings as fast as they could. The mother’s long and beautiful eyelashes started fluttering again. Then she perceived a sort of vibration, a sort of light draught that entered the baby’s nose. The baby had a hiccup and breathed in deeply. Then she breathed out with half a sob and opened her eyes. The little fairies clapped their hands and disappeared in a chaotic flight, like a cloud of butterflies. The mother went on blinking, but now her eyes were shedding tears of joy.’ 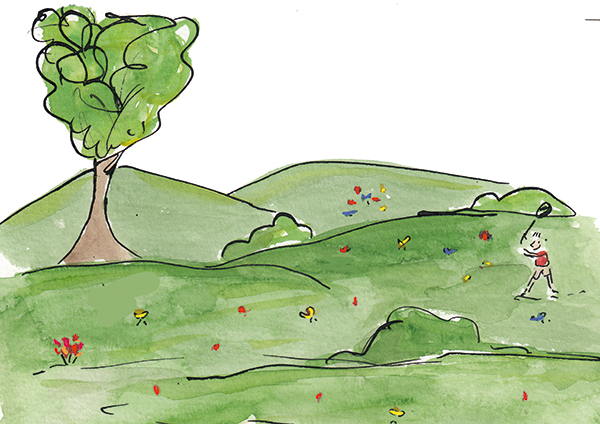 “Since that day when I was so moved by this story, I have been chasing butterflies with my friend P’tit Louis. I caught a good many of them awed by their beauty and their delicate shades. I  admired them, I respected them, I loved their beauty. But I couldn’t feel our mother like I did that first day. 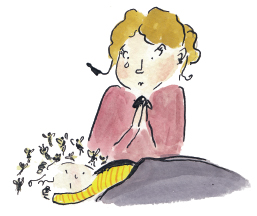 “P’tit Louis told me that it was because I was not chasing the right ones. I had to find the Butterfly King, the Monarch butterfly. He said his father had seen a group of them in the tall pine tree forest near Lake Charpal.

“We dedicated the whole summer to our search for the precious Monarch. From Severette we would bike as far as St Ferréol. I felt that the three-hour bike ride was worth the effort even if it landed us one Monarch butterfly. One day, at long last, near a copse of milkweed, we spotted one! It was a big, impressive Monarch. Without the slightest hesitation P’tit Louis cast his net and the Monarch was caught. There it was, the elusive Monarch, fluttering in the net. We didn’t dare touch it. I waited for something to happen.

“Suddenly these words came tumbling from my mouth, ‘Seeing that butterfly caught in a net makes me sad. P’tit Louis, please, how about letting it free?’
P’tit Louis stared at me for a long while. He understood I was disappointed. I had not felt the love I had expected for such a long time. He shook the net loose and let the Monarch flutter away. It landed on a leaf close to us and we stared at it completely silently.

“Then suddenly it seemed that I heard a voice from the butterfly. It was saying to us, ‘Hunting butterflies won’t fetch you love. Look for it in your hearts.’

“Now you can understand why I said to Sister Mary Magdalena that I wanted to find my heart’s desire.”
“Okay, but what happened to you while you were at the Montpellier Brothers’ boarding school?” 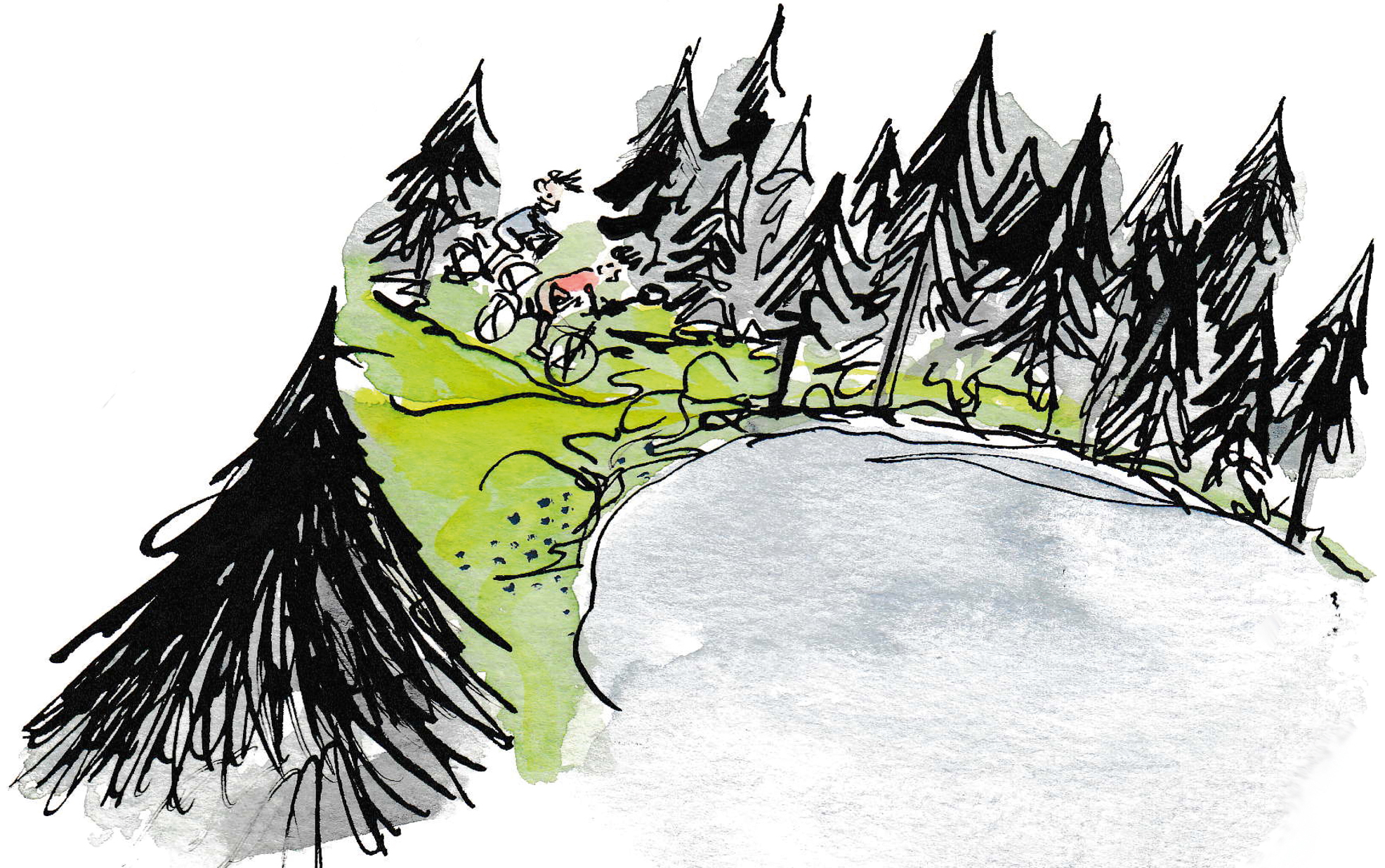 We shall probably meet them again in the next train, next month, to hear more about Danny the dreamer’s story.

Story by PAPIGUY OF MONTPELLIER
Illustrated by JULIETTE ALAY