In the previous episode, the three Canfield brothers took the trains that would take them from Montpellier to Marvejols in the Lozère district of southern France. Polo had told the story of his dog’s faithful friendship, Jack had told them how he had recovered his golden speech, and Danny described how he had been in search of sighs, but he had some more stories in store.

“Tickets please,” requested the collector on the train.
“How long is it to Marvejols, please?” asked Polo.
“Well, at least another three hours, and don’t forget to change when we arrive at La Bastide.”
“Thank you, sir,” responded Polo.

“So, Danny, now you can tell us what happened after you left. You had a kite then, so what did you do with it?”
“Yeah, that was a strange kite! It took me as far as California. But before telling you how I got there, I’d like to tell you what happened to me once in high school.

“I left the boarding school in Montpellier to go to a Vocational School in the North of France. I crossed the whole country by train with that bulky kite in my luggage. The school was in Lille, and that is where I met my friend P’tit Louis. One day, he invited me to spend the weekend at his home. We were both fourteen then. He lived at the end of the world, in a windy place, so I took my kite with me.

“His parents lived in the country, not far from a small town called Titsynthe. There were in fact two towns, located on both sides of a canal and connected by a long iron bridge. On one side there was Titsynthe, and on the other Pinsol-on-the-Sea. All the people in Titsynthe had red faces and talked loudly, with rather rough frightening voices. The people from Pinsol had greenish faces and a nasal way of speaking. When they talked all together on the bus, it sounded like a strange rock concert of muted trumpets and bass guitars.

“Being from Titsynthe, P’tit Louis was a red-faced boy. He introduced me to his friend Till who was from Pinsol and had a greenish face. We used to fly the kite over the canal.
“One day, I asked them, ‘Why are there greenish faces on one side of the canal and red ones on the other side?’ 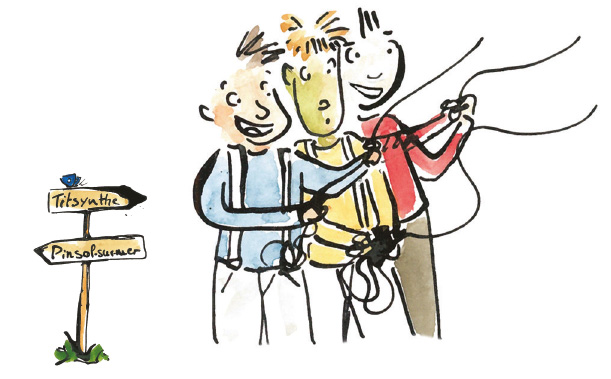 Then P’tit Louis told me an incredible story that happened there when he was young. At the time, the city was called ‘Yellow Dunes’ and it included the houses on both sides of the canal. The green and red-faced people lived together, in the same areas. P’tit Louis and Till were neighbors and went to the same school. Their families would often picnic together and the boys were inseparable friends, sharing many activities: playing ball, reading, lying on the grass to watch the clouds, chasing butterflies, singing while biking, whistling with the birds, drawing, and flying their kites high in the sky. They had a peaceful happy childhood. Having a friend means your life takes on all sorts of colors.

“One day, a violent argument broke out between a red-faced man and a green-faced man. The red faced man was so angry that he became redder still. He screamed like a fire siren, his bulging eyes flashed with anger, and he then decided that all the green-faced people were his enemies. His anger was so strong that it gave rise to more anger, so in a month’s time the red-faced men were fighting the green-faced men in the streets, in the banks, in the parks and in the shops. Children were kept at home and stopped going to school. Their parents said that going out was too dangerous, so the kids cried a lot. 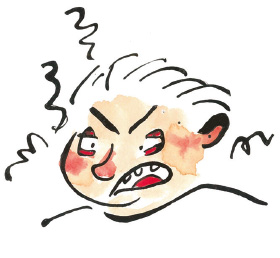 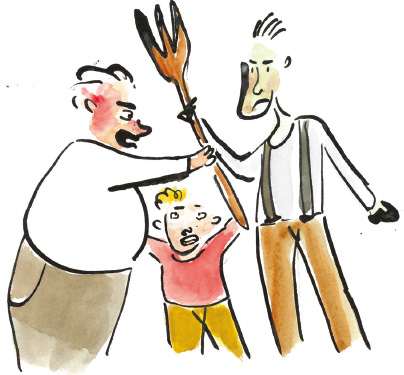 “So the big chiefs decided that the people would no longer live together. They halved the town of Yellow Dunes. The canal would become a frontier never to be crossed, and they built a wall in the middle of the bridge – a very high wall, so that nobody could cross over. Many people had to leave their houses and change sides, losing their jobs and friends in the wake. 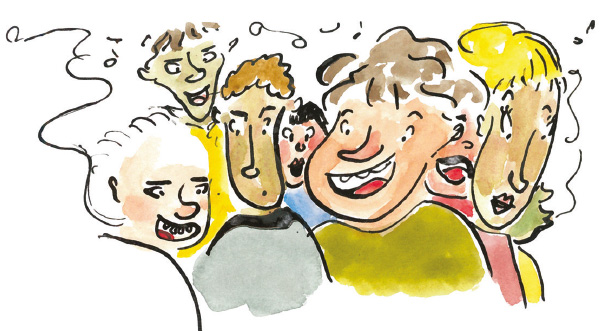 “P’tit Louis’ parents were sad to have to part from their neighbors. All these people of goodwill had to part. P’tit Louis had a broken heart now that his friend was on the other side.

“When he went to school in the morning, he would meet only red-faced people, and in school all the children were red. They did not agree at all with what was happening. They liked so much having friends of all colors. Why shouldn’t they appreciate all the colors? Why shouldn’t they accept others as they are? Uncle Remy, who had lost one of his arms during WW2, enjoyed saying, ‘Each one of your hands has different specific fingers, and that is what makes your hands work properly.’ So now, what could they do? 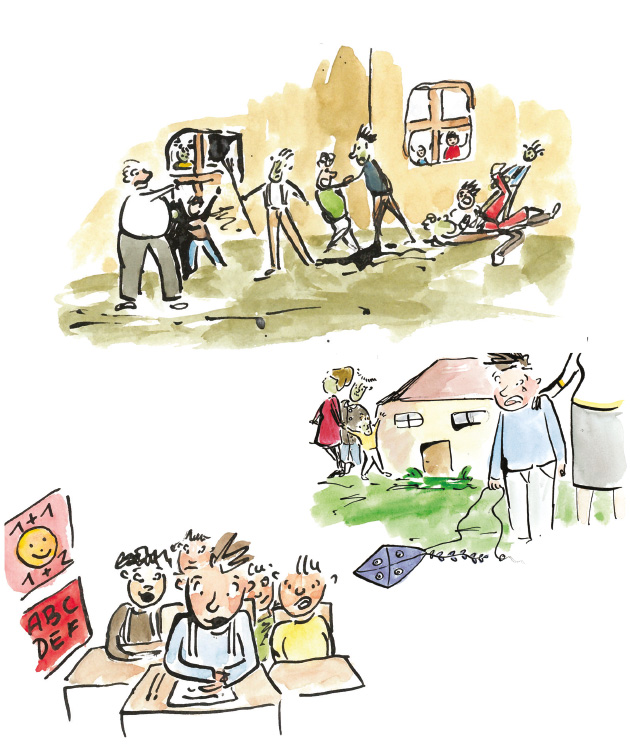 “P’tit Louis would sit by the canal and watch the windows in the buildings on the other side. He could imagine the people behind the windows. He looked for some sign from Till. What was he doing? 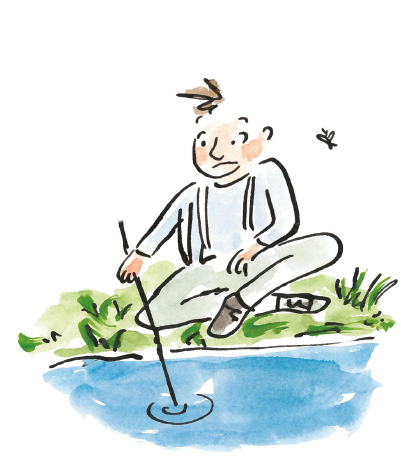 “One day, seagulls were flying in the wind, to and fro and over the canal, which made him think, ‘A shame we can’t fly! Then we could cross over the canal and play with our friends on the other side.’ That is when an idea came to his mind: he would build a kite to communicate with Till on the other side of the wall. He could not fly, but at least he could send messages to his friend that he kept thinking of him, and with their kites they could play together in the sky. 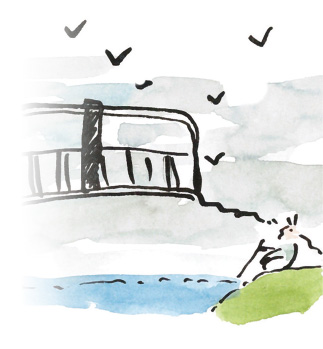 “No sooner said than done! P’tit Louis built a very big rainbow-colored kite. He asked his mother to write the word ‘Hello’ on it. Every day, after school, he went by the canal to fly his kite. Three days went by with no response. On the fourth day, some redfaced children arrived with their own kites of all colors and flew them together with his. But there was still no response from the other side of the canal. On the sixth day, the first kites flown by the green-faced children appeared in the grey sky. The children had got the message and they were now exchanging friendly words and tidings in the sky. It was fantastic! P’tit Louis went back there every day. But he still had not heard from Till.

“So he finally came back home, very disappointed.
His father noticed it and explained, ‘Son, the sky is grey in this part of France, because it is fraught with human moods. But if you look carefully, there are many shades of grey, from dark to bright. That would not be possible if there was not a light behind it all. That light is the sun, and the sun always continues to reflect itself on the moon, even when it is dark. It is always there, waiting. Then, occasionally, the grey veils fray out and fade away, and there comes the sun, winking at us and warming our skin. That is what we must do. Wait for the right moment, let the disturbances clear away and just be there, with all that warmth in our hearts and the light in our souls. Sometimes, it seems far too long to wait. We would like the sun to be there, presto, but if you accept the fact that there are some colors and a sun behind the grey clouds, then you can wait and hope. And after all, Till might be busy making a new kite.’ 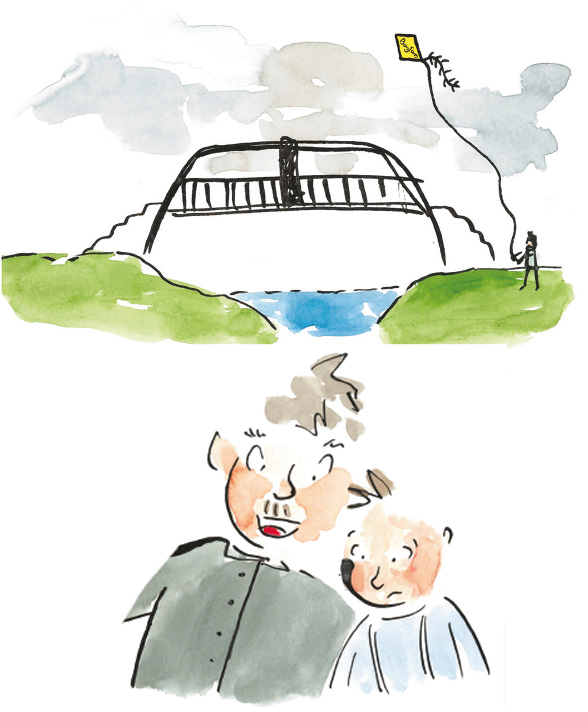 “The ninth day was a Saturday. That morning, P’tit Louis’ mother woke him up with a big smile and told him to go outside and see what was going on. Not only one but thousands of kites of all shades were flying over the canal. They said ‘Hello’ to him and to all the red-faced boys and girls. He spotted Till’s kite and ran to get his own. The red children ran from everywhere with there kites, too. The sky was soon swarming with many colors, leaving no room for the grey clouds, no room for anger, and no room for quarrels. In that sky, there was only the huge smile of a child. 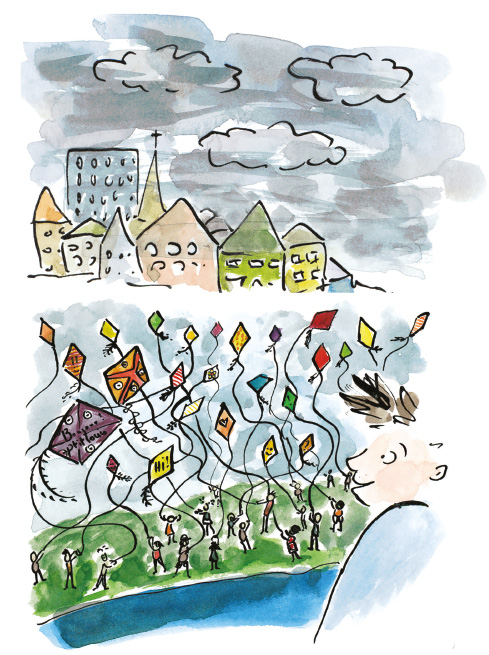 “Then he remembered the words, ‘Having a friend colors your life.’ If we whole-heartedly accept and make our level best to get on well with others, there is no reason why we should argue and get mad.

“Several years later, the people decided to pull down the wall. Whether they were from Pinsol or Titsynthe, they could now cross the bridge again. It was still not as it was before, not yet anyway, because wounds of the heart do not heal fast. So now, every year, on the second Saturday of the month of October, the children from both towns gather by the canal and fly their kites to tint the sky with their multi-colored smiles.”

“La Bastide! La Bastide! All change! The connection to Marvejols and Clermont Ferrand is on Platform 2. The train will leave in twenty minutes,” called the ticket collector.
“That’s it,” Danny said. “It’s the end of my story about the kites for peace .”