What we cannot see

Many of us live surrounded by invisible, silent radiation. ELIZABETH DENLEY shares some thoughts on how manmade electromagnetic radiation may be affecting our health and well-being. 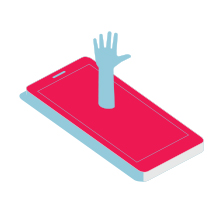 As school kids we learnt that the ancient Romans used lead utensils for cooking and eating. As a result, many died from lead poisoning. We all thought they were crazy. I wonder if they knew at the time that the lead was poisoning them. But are we any wiser today? Have we learnt from the lessons of history?

Let’s take our use of technology – Wifi, Internet, Bluetooth, mobile phones, microwave ovens, and all the other manmade sources of electromagnetic radiation in our environment. What do we know about their effects?

The World Health Organization has acknowledged that manmade EMR may affect our health, and many research studies have been done, with variable results. Not everyone is convinced that this is a public health issue, and there are others whose symptoms are serious enough to convince them from personal experience. Yet even knowing that there could be dangers, are we going to  continue on so that, like the Romans, future generations think we were crazy? We continue to use Wifi, Internet, Bluetooth and mobile phones with gay abandon, like never before.

In May 2011, the WHO’s International Agency for Research on Cancer announced it was classifying electromagnetic fields from mobile phones and other sources as “possibly carcinogenic to humans” and advised everyone to adopt safety measures to reduce exposure, such as using hands-free devices or texting.

Radiation advisory authorities in some countries, including Austria, France, Germany and Sweden, recommended people to:

– Use hands-free to decrease radiation to the head,
– Keep the mobile phone away from the body,
– Do not use your phone in a car without an external antenna,

and there is now a field of research known as bioelectromagnetics.

How can we understand the way EMRs affect our biology and health? It is quite simple really. All of us have three bodies – body, mind and soul – the physical body, subtle body and causal body. 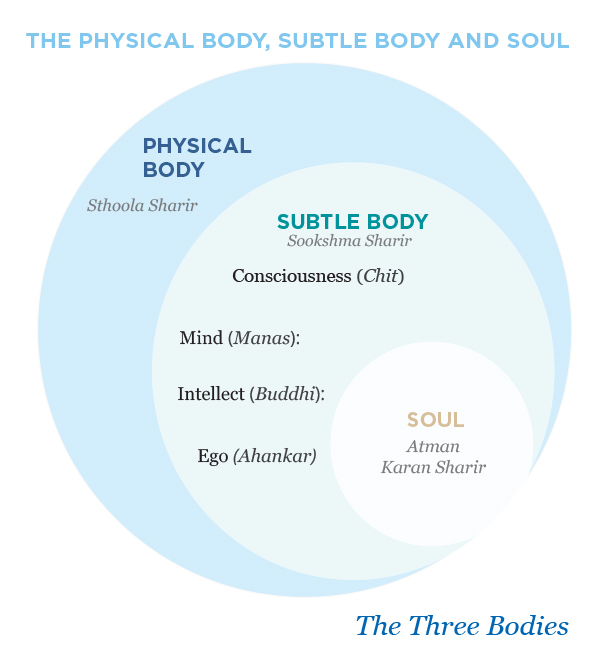 The subtle body, also known as the mind, is our energetic body and here we have an electromagnetic field created by the negative and positive polarity of charge. For example, the subtle body is affected by the build up of positive ions in the atmosphere before a thunderstorm, creating restlessness, and the release of negative ions once the storm hits, bringing relief. The negative and positive charges in this energy field also correspond with yin and yang, electron and proton, female and male, and the positive and negative poles of an electric charge, etc. This is how matter is constructed – as a result of the positive and negative charges in atoms. In Nature everything is in balance; not a static balance, but a state of equilibrium, of complementary energy flows that alternate just like

In Nature everything is in balance; not a static balance, but a state of equilibrium, of complementary energy flows that alternate just like alternating current throughout any given day. This is seen in our autonomic nervous system, with the complementary sympathetic and parasympathetic currents. It is also seen in the surya and chandra nadis of yogic science. At times one predominates, and every couple of hours the current switches, so that the other predominates. There are a few main inflection points at sunrise and sunset, called stationary points, where the turn of the flow is more prominent, like the turning of the tide. This is how Nature works, whether it is planetary movements, atomic movements, or any other flow of energy in the universe. Modern science and the ancient sciences of India, Egypt, China, Phoenicia, Greece etc. all agree on this concept of polarity in Nature. It is like our breath, which goes in and out in a rhythmic cycle. The flow of energy in our body, in the earth, in any being, creates a field.

Most diseases start in the subtle body
as an imbalance or disturbance.
That is why Chinese Medicine works
on the meridians, and Ayurveda
on the nadis and chakras.
Just because we don’t see or feel anything,
or cannot measure something,
does it mean that nothing is
happening at more subtle levels?

What happens when we add manmade EMFs into our environment? They interact with our natural EMFs. The stronger the wireless technologies we add to our city environments, the more they will interact with our own energy fields. Some people are very sensitive to the effects, getting headaches, rashes, nausea and nervous complaints. The science is still out on whether EMFs cause these symptoms, the evidence inconclusive, but while scientists do their research on the physical body they are unlikely to measure the real effects, which are happening at the level of the subtle body, the energy field. Eventually this can filter down to have a physical effect. Most diseases start in the subtle body as an imbalance or disturbance. That is why Chinese Medicine works on the meridians, and Ayurveda on the nadis and chakras. Just because we don’t see or feel anything, or cannot measure something, does it mean that nothing is happening at more subtle levels?

There is also an important ethical issue that must be addressed. We have created a situation of no choice: those who live in cities and towns have EM pollution imposed upon them, whether they want it or not. Whenever I open the Wifi settings on my iPhone in downtown Paris, New York, Tokyo, Singapore or Delhi, a whole list of networks pop up. I am surrounded, even when I personally choose not to turn my Wifi on!

They took 400 watercress seeds and placed them in 12 trays. 6 trays were put in a room without radiation, and 6 in the next room with two Wifi routers. All the seeds were watered regularly and given the same conditions of light. After 12 days the results were clear: the cress seeds next to the router did not grow as well, and some of them mutated or died. The girls were shocked by the findings.

The experiment quickly drew international attention and research scientists went on to replicate it with double blind controls and also using the seeds of other plants such as mung beans. They added other experimental variables. Here is an example using mung bean seeds in seed trays in 4 different environments: 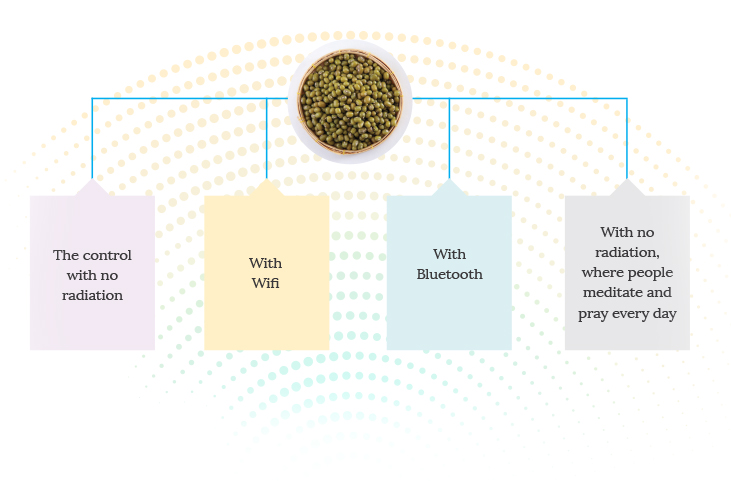 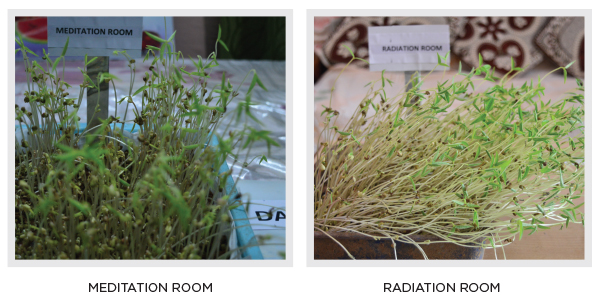 Try it for yourself and see what happens. You can also devise other experiments to observe the effects of EMFs. We hope you will share your results at contributions@heartfulnessmagazine.com so that we all learn more about the effects of electrosmog.

One of the Danish students who did the original experiment with cress seeds said afterwards, “None of us sleep with the mobile next to the bed anymore. Either the phone is put far away, or it is put in another room. And the computer is always off.”

We have a choice: to opt for health and wellness, or ease and convenience. If you think it is worth being careful and taking preventative measures, here are a few simple things that can make a difference:

– Turn off the Wifi when you are not using it, including at night
– Don’t use a mobile phone in the car except when necessary, and especially don’t charge your phone in the car
– Keep your mobile phone in a bag, not in a pocket next to your body
– Only switch Bluetooth on when you really need to use it, otherwise turn it off
– Keep your phone away from your bed when you sleep
– Avoid giving small children phones to play with like toys

Can you add any more lifestyle habits to this list?

Elizabeth is originally from Australia, and is the founding editor of Heartfulness Magazine. She loves meditating, writing, singing, playing the piano, gardening, thinking, spending time with her two grown up children, and life in general. She is active in researching and publishing the writings of the Heartfulness masters of the 20th and 21st centuries. She considers every moment of every day to be precious.