Home› Creativity› Beyond traditional and modern

JYOTI BHATT is a celebrated and awarded artist, best known for his work in painting and printmaking, as well as his photographic accounts of rural Indian culture and folk art. He and his colleagues founded the “Baroda School” of Indian art. He was awarded the Padma Shri in 2019, and has been honoured with 5 Lifetime Achievement Awards. In August 2021 he had a conversation with ANANYA PATEL, musing about his life and his art. Excerpts from that conversation are presented in this 2-part series, along with some of his work.

I was born and grew up in a small town, you could say a large village. That was a long time ago, and as a child I had not even heard about Mickey Mouse or Humpty Dumpty. So, what I create is something I grew up with. It was only after moving to Baroda to study in a Fine Arts college that I learned about Western modern art. By “modern,” I mean what happened about 100 years ago. It’s an historical term. Modern is not contemporary anymore.

I also realized that what the modernists were doing, the reforms they were trying to make, were consciously taken from other artforms. This is especially true of Cubism. Picasso was inspired by African art, which was tribal.

Similar traditional art is done by villagers and tribal people in India, along with many classical arts. My work became a combination because what was happening around the world also affected my work. But it was not like the Bengal school, or the revivalists, who wanted to do away with the British teachings and customs and go back to Ajanta or Mughal styles. I think any art is good art. And the divisions of India versus Europe, and the West versus the East, have been made for our own convenience and selfish interest.

My photography is not really part of my “creative” work. I wanted to document things when I realized that our way of life was changing. And they had to change. We can’t expect them to remain the way they were 100 years ago or earlier. But at the same time, because of the influence of urbanization, earlier, nicer traditions started disappearing. I thought that I should photograph whatever was alive, because after a few years it wouldn’t be there. Archaeological specimens like the Taj Mahal or Qutub Minar are old. They survive because they are made with stronger materials. But almost all the material used for folk art is something locally available and impermanent.

When we take a blank canvas, we often start thinking of selling it, or winning a prize in a competition, or seeing it hang in a museum, or something like that. Folk art made me humble: If people can make art and live with it, I should also learn. They never complain about material – they don’t get good paper or canvas. Whatever is available is good enough for them and they are able to create and express themselves. Because of this, my attitude became more open to various materials. I do not stick to standard classical materials like oil paints and canvas. Recently I have been working with acrylic cut outs. The technology is now available in Baroda because many small industries have started helping artists.

My idea or understanding of tradition is connected mostly with reasoning – why did they do something? And if we adopt it, how do we adapt it for ourselves?

For example, while making a drawing of a figure or motif in the stylistic manner of a tribe in Chhota Udaipur, instead of copying I tried to think how that person might be thinking. It was a forced effort, but it allowed me to enjoy it much more. I hope that this has added to my visual vocabulary and way of working.

A few things from village, tribal, and folk art started entering my work. But I have not deliberately tried to do this. I get ideas for paintings from anything that excites me. I had come across a magic square, a chautisa yantra, back when I was in school, and it kept reappearing to me. It’s a very simple four by four square using 1 to 6 in digits, and you arrange it in such a way that the columns, rows, and diagonals sum up to 34 each time, in every configuration. In this way, I have made several paintings.

So I cannot say that there is Western, or Indian, or folk influence specifically. I noticed a yantra painted on the wall of a few village houses in Rajasthan, and I asked why. They said it’s a good omen. Then I asked a few more people about it. Then I read a book by a mathematician, where he explained how yantras are made, how their symmetry works. I thought this was a very good subject to try, because all I had to do was write those numbers but the visual form would be my own. 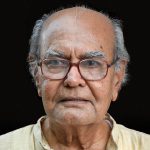 Jyoti is a celebrated artist, best known for his work in painting, printmaking, and his photographic documentation of rural Indian culture and folk art. He studied art in North America and Europe before returning to India and founding the “Baroda School” of Indian art. His etchings, intaglios, and screen prints combine the traditional and the... Read more