An Art Essay by the Joliet Mural Artists

KATHLEEN SCARBORO is one of a school of artists who have developed the ‘Joliet style’ of mural painting in Joliet, Illinois, near Chicago. Here she shares their story, and the importance of public art in bringing a sense of cultural identity and community through environmental enhancement.

Even a brief look at art history illustrates the vital link between artists and the societies they represent. We understand diverse civilizations by studying and enjoying the great works of art and architecture they created. It is a relatively recent phenomenon, primarily in western countries, that so many contemporary artists find themselves outside society, unable to assume their role as voices for the beliefs and aspirations of the populations to which they belong.

All human beings, rich or poor,
need aspirations to give meaning to their lives.
The role of art is to take these aspirations from
a latent impulse and translate them into physical form
to be shared and used as a source of continued inspiration for all.

Art has never appeared less necessary, and the artist has never been so alienated from society, but this unnatural situation is beginning to change. Starting in the 1960s, community-based public artists worked in cities to reunite artists and communities. 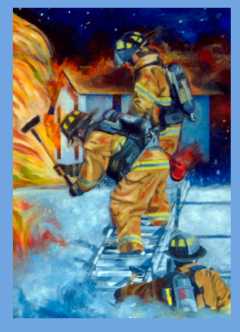 For the Friends of Community Public Art (FCPA), in Joliet, Illinois, a not-for-profit association, the goal is to revive public art by renewing and revitalizing links among local artists, civic and political figures, and the people of the city. Local authorities support the association, as they see the need to invest in public art as a way to express the ideals of the community and enrich its environment.

FCPA is dedicated to reflecting the entire community of Joliet, including its economic, ethnic and racial diversity. The organization’s founders and members believe art is the ideal vehicle to transform society from within. Without this projection by society into the future, humanity could remain stuck in material struggle, never going beyond the most basic physical level of existence.

Martin Luther King’s simple and unforgettable statement, “I have a dream,” embodies this concept. Humanity advances by dreaming itself forward, and art is one of the most efficient vectors of this phenomenon. The existence of art and its support by the population are symbols of the vitality of the inner impetus toward fulfillment within a society. All human beings, rich or poor, need aspirations to give meaning to their lives. The role of art is to take these aspirations from a latent impulse and translate them into physical form to be shared and used as a source of continued inspiration for all.

The unflagging efforts of FCPA to raise the level of cultural awareness in Joliet have been fruitful. Great progress has been made between artists and the public. This new partnership has allowed the association’s artists to learn and apply basic principles needed to promote the appreciation and material support of the visual arts. People have to identify with the artwork for a sense of belonging to develop. This sense of belonging and identification is vital. The aspirations of the public – its most productive and positive aspects – must be represented so that the desire for ownership can emerge.

Another essential element in the nurturing of public art is the quality of conception and execution. Through FCPA, mural participants received a conceptual and technical education that guaranteed the quality of content and expertise of execution. What was created can be considered a school of painting, the result of constant communication among a number of artists, all striving to collaborate at the highest possible level.

The ‘Joliet style’ is as recognizable and definable as other schools of painting in the history of art, where artists grouped by an affinity of ideas influence each other. In Joliet, the shared workspace has not only been the interior of a studio, but also the city itself. The artists have had the exciting experience of sharing their discoveries and efforts with the community in a very immediate fashion. The public has been both spectator and actor in a contemporary art movement while it was happening.

Joliet was ripe for a new vision of itself. Most people thought Joliet was not a very interesting place. Because of a lack of knowledge about its history, the city’s image had suffered, so it was more a place where one ends up rather than a place one would choose to live. We as artists began researching the city’s history, and discovered an endless number of dramatic and exciting stories concerning its past. These stories served as raw material for the elaborate works of public art. The community’s cultural identity started appearing on the exterior walls of the urban environment. The stories the city had to tell were exclusively its own. 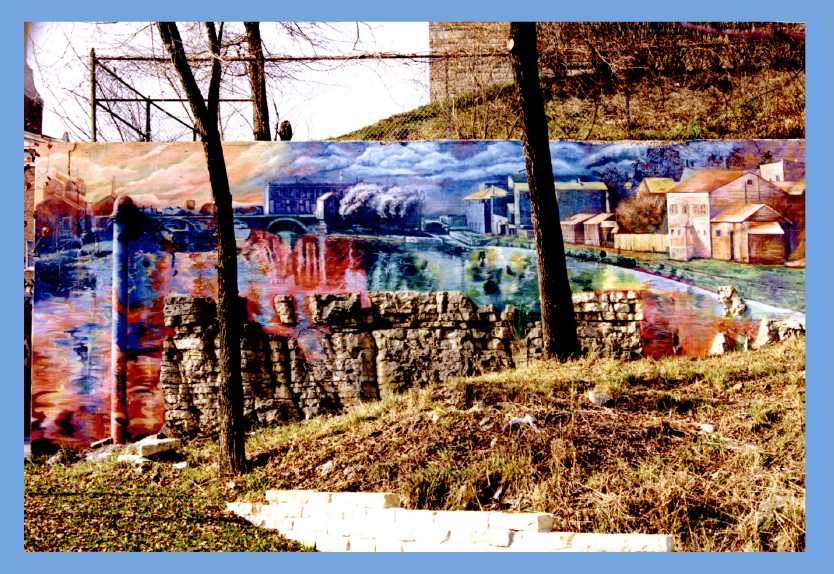 The development of public art in Joliet has spurred a profound transformation in the local mentality; one that is rapidly evolving. The opportunity for people to contemplate their history and heritage in a lively, colorful visual form has been educational. People are often surprised that their personal histories can serve as subject matter for a work of art and that people like themselves who are willing to get involved in the daily life of their communities can leave their mark on history. They realize they can make a difference if they see themselves as capable of making positive changes. And they start to understand that our urban environment is our collective work, reflecting what we are and how we see ourselves.

Mural paintings, sculptures and mosaics have an overall
effect that alters our existence in a positive way,
just as everyone who puts a flowerpot on a windowsill makes a small,
yet appreciable, gesture toward making our daily lives more poetic.

Mural paintings, sculptures and mosaics have an overall effect that alters our existence in a positive way, just as everyone who puts a flowerpot on a windowsill makes a small, yet appreciable, gesture toward making our daily lives more poetic. As attention to the environment awakens, and we see not only our homes but also our neighborhoods and cities as belonging to us, then a great transformation can take place. As the city is ‘dressed up’, we start seeing ourselves differently, too. The exterior environment reveals how we feel about ourselves. If we make efforts to enhance our urban surroundings, we give form to our desire for inner refinement. As we reflect our environments back to the community, it creates and reinforces a sense of pride and dignity of belonging to a special, unique place.

If FCPA has been given space and material support to create lasting works of public art in Joliet, we can assume that other cities will recognize a need for similar programs. All it takes is a few enlightened and devoted minds to put the wheels in motion. It is our hope that Joliet’s example will inspire other cities to awaken their innate need for environmental enhancement and education through the revelation of cultural identity.

Article by KATHLEEN SCARBORO
Art by THE JOLIET MURAL ARTISTS

When Kathleen received her first commission for a mural painting from The Public Art Workshop of Chicago, it was the beginning of a lifelong career in public art. Her series of Reunion Island paintings were exhibited over a nine-month period in the main hall of the Museum of Mankind in Paris, and currently she is working on a book entitled Painting India: Women and Color with Catherine Servan-Schreiber and Deva Villeroy, wherein reproductions of her paintings will be accompanied with quotes derived from the works of talented Indian writers of the past and present on the themes developed in the paintings.

Raspberries as agents of change

The role of laughter in a marriage