Home› Volume 7› October 2022› How clear is your communication?

VANI KOLA, venture capitalist and founder of Kalaari Capital, is interviewed by LAYA IYER about moving to the United States to study, and what she has learned from her experience of living and working in different cultures. She also shares her views on the value of direct communication and setting expectations.

Q: What were the most important things you learned when you moved to the US from India?

VK: I moved when I was 20. It felt like limitless possibility. I was discovering my potential, both academic and creative. I was going into a university environment, a melting pot, so maybe the cultural shock was not too great. It was a stepping stone, because it was an insular environment. There were so many resources available – libraries, the variety of classes – and it was a time of enjoyable learning and having fun!

Q: Are there any experiences or stories that stand out for you still today?

VK: I found that people were mostly very helpful. I learned to ask. When you don’t know something, and you ask, people take the time to help you. That is something that has stayed with me. Also, how important it is to do the same for others. That’s on the positive side.

During my first summer, I was looking for a job. I found one, but I didn’t think to ask, “How much are you going to pay me?” or “Is there a contract I need to sign?” Instead I said, “I want to work,” and they said, “Yeah, sure come on over.” I didn’t get paid at the end of the first month, but I couldn’t ask. I thought, “Oh well, maybe they’re just running late, and they’ll pay me later.” Obviously, that was very naive.

I really needed that summer job, because as a student I didn’t have a lot of money.
So, after six weeks, I said, “Hey, I just need to check when I’ll get paid.”
They said, “But this was not a paid assignment. We didn’t say we’d pay you.”

Sometimes people think it’s not nice to ask, but my experience says it’s better to have very direct communication and clear expectations in a relationship, whether professional or personal. You can avoid unexpected disappointments, and you can avoid friction in relationships.

Q: What’s the best piece of advice that you’ve received about being a woman in STEM?

If I were to give advice, it would be against overthinking or overanalyzing risks while taking decisions, and just going ahead with whatever it is that you are trying to do. Don’t try to be a conformist; don’t try to be a rebel either.

Q: What does #leveltheplayingfield mean to you?

VK: Democratization of opportunity. It means that we are thoughtful about our unconscious bias and we change this to provide opportunity to people equally. For instance, in the context of working women, level the playing field means giving women the opportunity to continuously rise in their organizations.

Q: And what’s your advice for people who are looking to be entrepreneurs? What are their next steps forward? What actions can they take?

VK: First, build some experience. Also, to be an entrepreneur, it’s important that you are passionate about some idea, some problem you wish to solve, and have the skills required to solve it. Work systematically on developing these skills.

Another is perseverance to achieve your goals. There may be many setbacks, so learn to deal with setbacks. And find the right mentors who can be there and can help you.

Q: How would you go about finding a mentor? Or is there a specific way you recommend approaching people to be your mentor?

VK: You have to be specific about what you are looking for. For instance, I am looking to understand how I can build my early sales compensation structure; or I’m trying to solve a design problem; or I’m trying to get some feedback on our marketing strategy. Approach mentors in a way that they can be in a problem-solving mode with you.

Second, don’t look for mentors who can help you with everything. For instance, I may be the wrong person to ask, “How should I build a sales structure?” Ask people who can help you in a specific area?

Q: Thank you so much for your time. 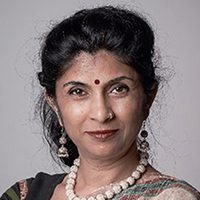 Vani is the Managing Director at Kalaari Capital, a venture capital firm based in Bangalore. She is a renowned investor and a visionary known for identifying emerging markets. Vani enjoys spending time with her family, practices yoga and Heartfulness meditation,believes in sustainable living and grows enough organic produce in her garden to meet her family’s... Read more