MANA the elephant with a heart of gold – epilogue 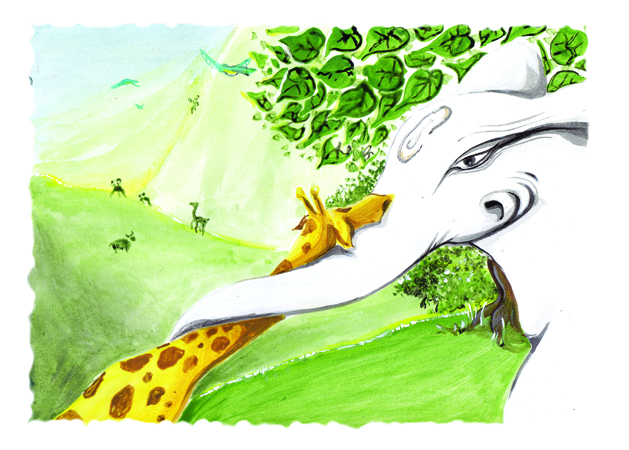 Once upon a time, ages ago, in the Himalayan forest, there was a white elephant. His name was Mana and he was the descendant of a whole line of white elephants that came from the Hui-Sai forests in the kingdom of Siam, and they could speak the human language. Our story continues ….

A few years later, a young giraffe from Africa blew in to the Himalayan forests. As Mana had done before her, she had decided to leave home and her daily routine in search of adventure, with the hope of meeting some remarkable beings capable of teaching her about what truth really is. 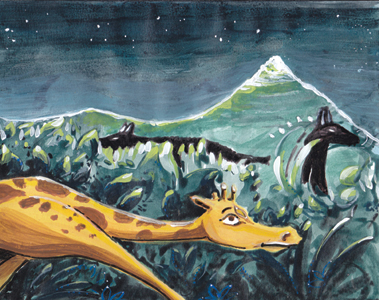 Tonia’s journey had been rather grueling, as she had had to bend constantly to go unnoticed by all sorts of predators. Her back was aching, and she found some rest at last near the elephant Mana, whose fame had now spread beyond India’s borders. Every evening when darkness fell, all the animals in the forest would meet at a pool and drink. Then Mana and Tonia would sit and engage in lengthy discussions, interspersed with long pauses. Those were opportunities for the little giraffe to be taught by Mana the sage. The animals around who were interested would regularly join in. On the last evening of Tonia’s stay, Ujala the frog told them the latest news about Goruk, who was now known as a brave, honest and generous man. They all marveled at such a miraculous change and praised Mana for it.

Mana answered them that it was not about talent. Love alone made the miracle possible.

Tonia, the young kind-hearted giraffe, asked him, “Where does love come from?”

Mana said, “The only thing we know is that love sometimes comes, then it enlightens us and may dwell within us either for a long or a brief time. Unpredictable, it reveals what we really are, it makes us grow and it may even make us desperate. It emerges from that peaceful place, the oasis, the island perhaps, at the bottom of our hearts. It can regenerate everything on the earth.” 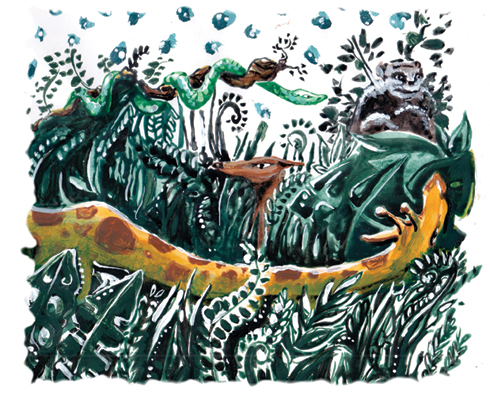 After a long meditative pause, Mana the elephant went on, “In that world of men and women who came from a strange planet, wars, violence, misery and injustice have been rife for ages. But strangely enough, these men are also capable of expressing beauty, creativity and tenderness. I have even met human beings who are fantastically compassionate, and others who sacrifice themselves for their fellow human beings, and are able to love beyond themselves. 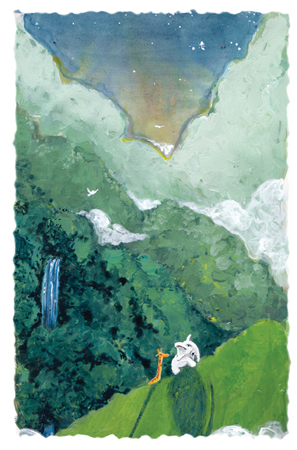 “During my trip in Africa I was amazed when I met men of faith who could pursue their plans even though everything seemed to be against them. I have seen human beings being destroyed and who, for all that, found the courage to rebuild their lives, hope and help one another. I have also met others who were capable of loving unconditionally, and giving an enduring love.

“This shows that all these virtues are hidden within their hearts, so much so that men themselves have forgotten they ever existed. It is as if these qualities have been wrapped, swaddled in our greediness, our jealousies, our sense of self-importance, our self-centeredness, etc.”

Turning toward Tonia, he added, “That’s why we must try to remove any of our vibrations which are too heavy, or at least try to make them lighter by making that heaviness melt away. Sometimes a salutary shock helps us slightly draw the veils, thus letting the grace of the moment appear in all its beauty and simplicity. But more durably, love makes all the grossness melt away, which helps the person again follow the way of the heart and shows once again the naturally good qualities she has.”

Tonia the giraffe decided she would leave the day after. Back home, she told everyone about the discussions she had with Mana the elephant, and more particularly to one of her friends, an American human being called Marshall. And that is how she inspired Marshall Rosenberg, who then taught other human beings the way to peacefully reduce any tension between men.

It is the end of the tale.

Let these words illuminate your path and enchant your hearts.

Story by PAPIJI from Montpellier