Volunteers are the lifeblood of Publicolor. In 2000 we won one of our country’s highest honors, the President’s Service Award, from President Clinton for our work with volunteers in the community.

Every year over 1000 volunteers join us as painters on Saturdays in under-resourced schools and community sites. We transform these sites through warm color and thoughtful design. Publicolor paints dignity, respect, inspiration and safety in low-income neighborhoods.

Corporations love to send their employees to paint alongside our students as they see this as a great team-building opportunity. It’s also a special way for corporate employees to participate in their company’s philanthropy. Publicolor students consistently mention Saturdays as their favorite part of Publicolor, citing getting to meet new people as most special. They cherish learning about new job options and what it takes to succeed. Publicolor’s volunteers are treasured role models! 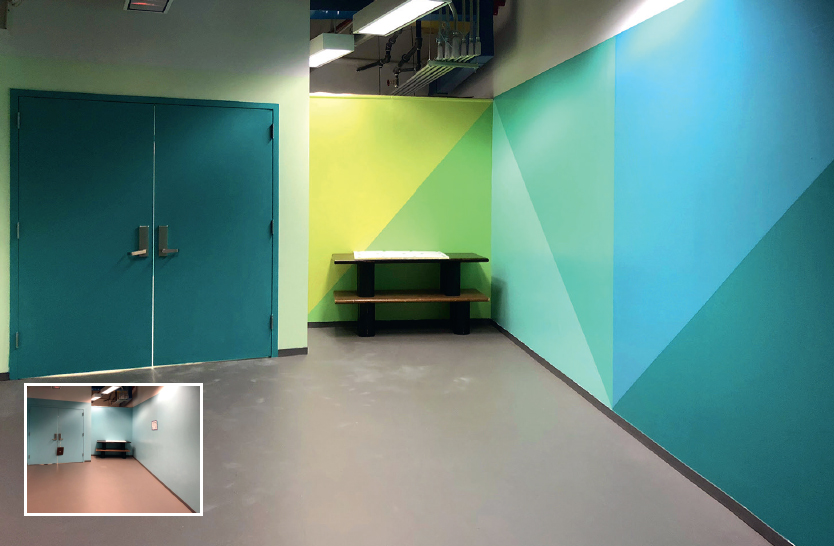 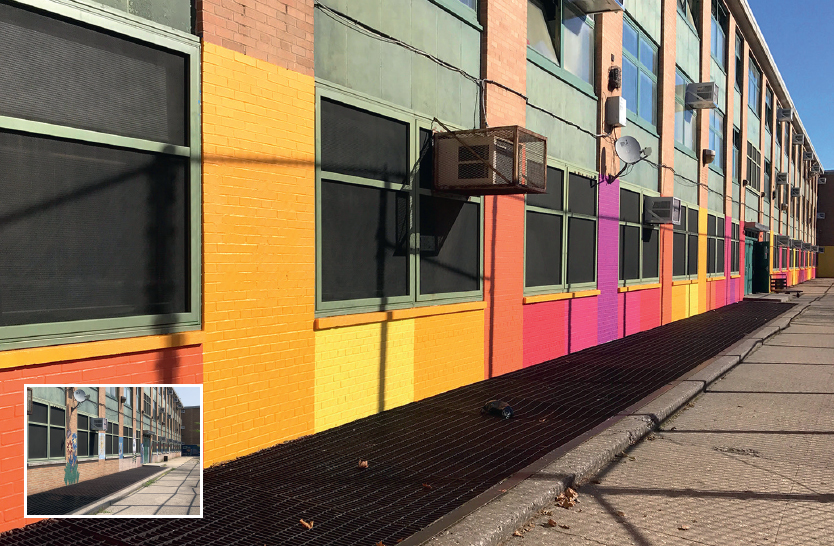 Academic tutors also join us as volunteer leaders of our weekly career exposure workshops, and as mentors for our high school seniors and college freshmen. With the help of our volunteer painters, Publicolor has transformed about 500 sites. With the help of our tutors, 85% of Publicolor students enter college not needing remediation versus 19% of their school peers. Thanks to our mentors, 98% have stayed in college after their freshman year versus 66% at the City University of New York. Since most of Publicolor students are the first in their family to go to college, the encouragement and guidance they receive from our volunteers is invaluable.

For all these reasons, Publicolor treasures our volunteers. We couldn’t do what we do without them!

Q: Please share with us the mission of Publicolor.

RLS: The mission of Publicolor is to creatively engage high risk, low-income students in their education and prepare them to be productive in the workplace.

Q: How did the organization form?

RLS: I was very concerned back in the late ’80s about the rising dropout rate. All I could think of was the horrible impact that would be on the future of our economy. In another life I had helped develop the Big Apple Circus and was a founding board member. I got to see a lot of schools that had our arts and education program, and many of them were in east Harlem. All of them looked and felt like prisons. 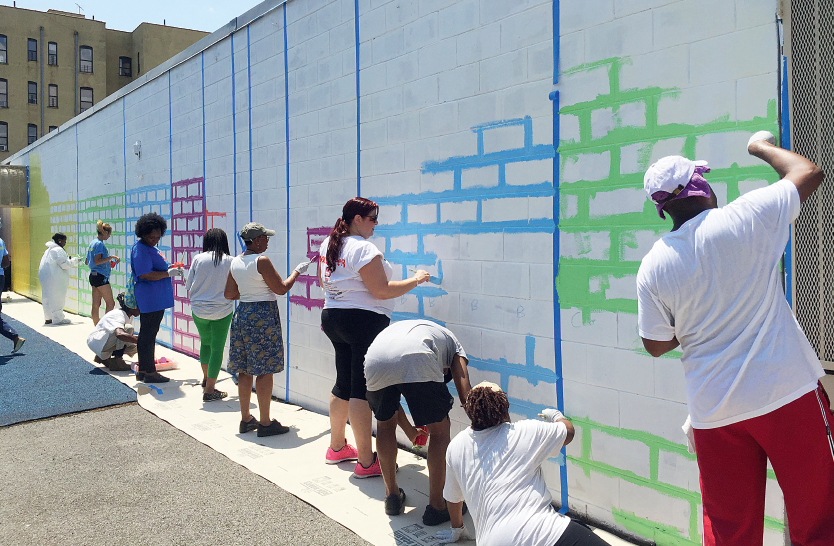 At the same time I had just finished a masters in industrial design at Pratt with a specialty in the psychological effects of color. Color has a huge effect on our attitudes and behaviour. So I thought about putting a paintbrush in the hands of disaffected students – the ones who are at high risk of dropping out. I wanted to teach them the marketable skill of commercial painting, and teach them strong and transferable work habits. And along the way, they would develop a sense of pride and ownership of their school, and start attending school more regularly. Also, if they spend any time with me, they’ll get to understand the importance of education and how that’s going to be their path out of poverty.

So I mentioned the idea to the woman who ran the circus’ arts and education program. She also ran an educational complex in East Harlem, and she said to me, “Come on in. I want you to paint my whole school.” It was a city square block school of five storeys. The project was a huge success. Estee Lauder had wanted to do something in that school and the principal suggested that they meet with me. They loved the idea and they volunteered. We did a lot of prepping with the kids during the week and on weekends. We primed all the hallways, all the stairwells, and then drew thousands of linesm because I had a rather complicated design. Literally, within one day, from Estee Lauder, my friends, the teachers and the principal, we had 350 volunteers and we painted all the public spaces of the school. It was rather extraordinary. 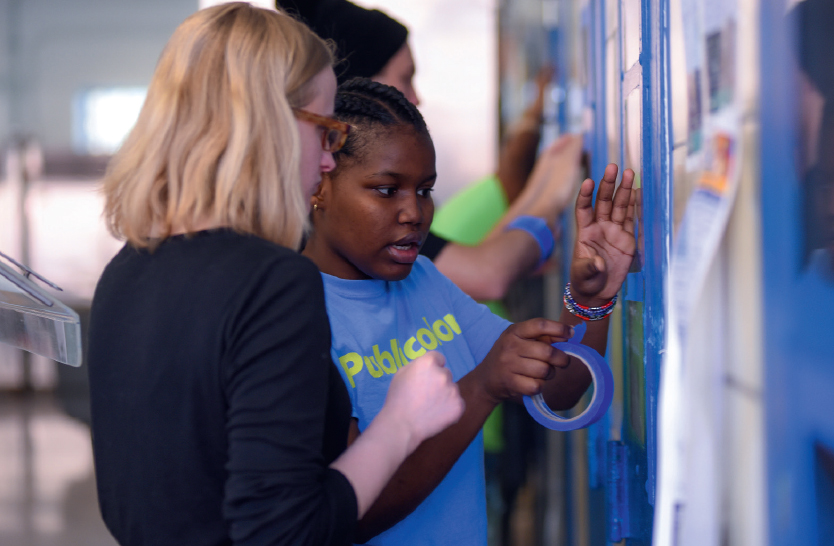 Then the school’s Chancellor came by and pulled me aside and said, “This is a catalyst for change. I want you in my schools. I’ll send out an RFP for a school beautification program.” So I filled out the application with the Department of Education and we won the contract. I took a little time off to set us up as a non profit organization, and then we were! 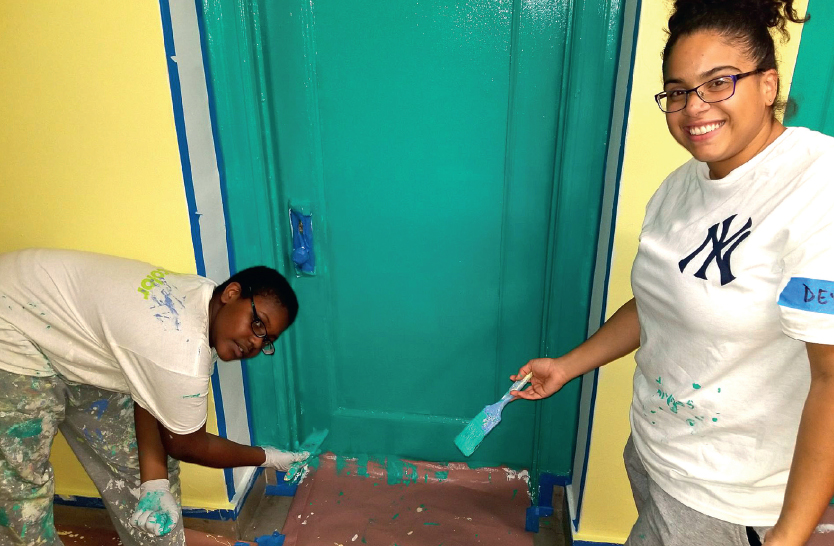 Q: That’s a beautiful story. What were some of the reactions after these drastic changes to the schools?

RLS: There was one father who said that it was as if Santa Claus had come and left this gift. It was just so gorgeous. He said something about Santa and his elves, because when he arrived on Monday to drop his son, he couldn’t believe what he saw. The whole school was completely transformed. The kids love it.

I have learned – and at first it hurt my feelings – that change is very difficult for many people. For some, their initial reaction was not fantastic. But what I have understood is to give them two weeks to adjust, and almost everybody ends up loving the change. And there are always going to be a few who don’t like yellow, or don’t like the blue that I chose for the doors. In the end, if we’ve used any color that the kids and the principal don’t particularly like, then we change it. 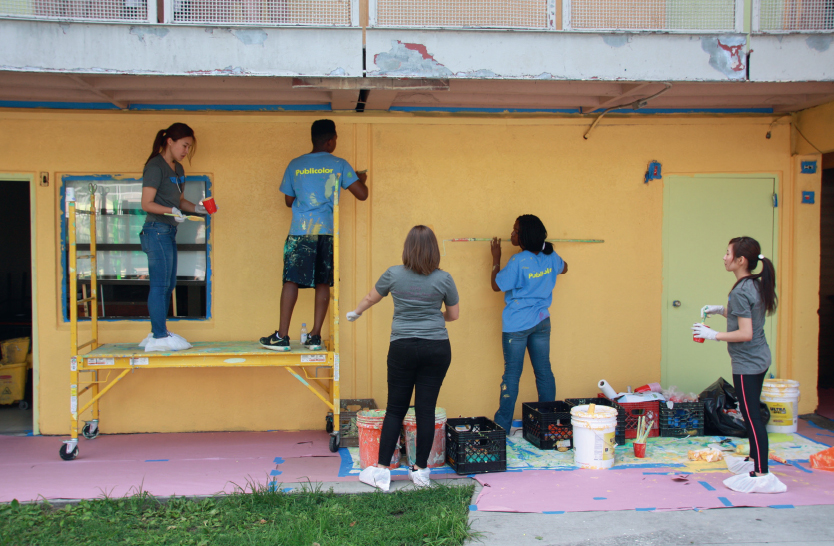 Q: Is there a student who stood out as being especially enabled by the transformation or the mentoring program?

RLS: Oh, that’s hard, as there are so many. One comes to mind. One of my students is a girl called Cecile, whose mother was very, very sick when she joined our continuum program. She claims it was because of us that she stayed in school and didn’t drop out, and she really didn’t want to drop out. She went on to college and said that she would have dropped out again after her first year because her mother was so sick. But we gave her a lot of support and explained why college was so important for her and how it would make her mother proud. Her mother passed away after her sophomore year, and she had a mentor who encouraged her to stay in school. She went to one of the top culinary schools in the country and she now has a job working in food services for Google. She also works for us on Saturdays as a site staff member. 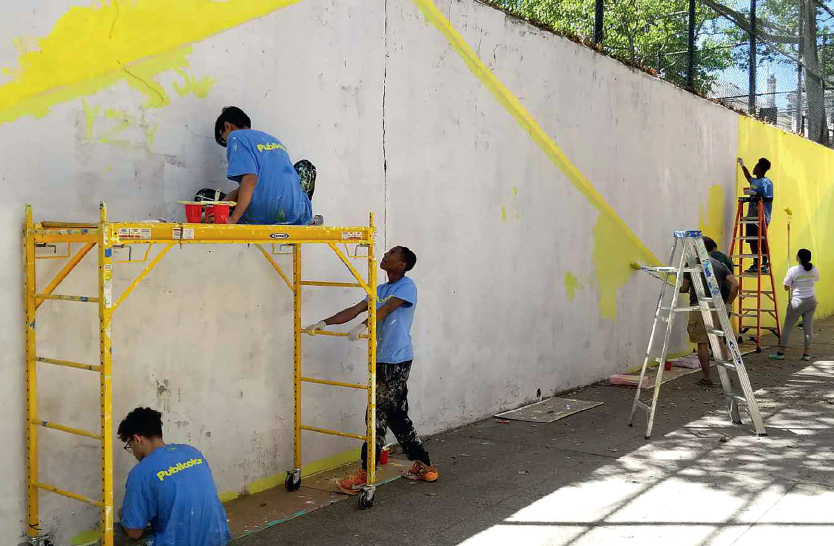 There’s just one more thing: I remember once we replicated in Pittsburgh and there was a guy at Carnegie who did a study on volunteerism and wrote a piece about Publicolor. What he and I uncovered is just how much better an employee feels about their company after they’ve participated in a volunteer program. They take great pride in the fact that their company is volunteering to help X, Y or Z. What we’ve noticed apart from the pride factor is also the magnificent team building opportunity. We have a lot of feedback about that from volunteers.

Q: Thank you so much for your time.

RLS: Thank you, my pleasure. 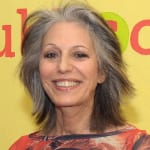 An award-winning industrial designer and innovator who founded Publicolor, a long-term youth development program, to educate disadvantaged youth and prepare them for jobs: publicolor.org.