LISA RAVEN is the Executive Director of Returning to Spirit, and a member of the delegation of indigenous leaders who met the Pope to invite him to Canada to apologize for the harms inflicted on generations of indigenous families. Here, she shares what reconciliation means to her. Her organization delivers two, four-day sequential and experiential workshops on reconciliation. You can find out more at https://www.returningtospirit.org/

The truth and reconciliation process involves resolving conflict from the past, often between governments, non-state bodies, and groups of people. The process1 aims at healing the relationship between the opposing sides through uncovering facts, allowing for acknowledgment, mourning, and forgiveness – all toward the final goal of healing.

Reconciliation means being at peace – our ability to be at peace for longer periods of time. Therefore, reconciliation has everything to do with each of us as individuals, as opposed to the “other.” For a lot of people, that’s a difficult concept to grasp.

Some people in Canada believe that Indigenous people should “get over it already,” however, reconciliation is not a journey with a destination. It is a series of moments and building relationships along the way, which are highlighted by peace, understanding, and mutuality.

For Indigenous people in Canada, reconciliation is in the language, and is a spiritual journey. There are no words for hate and resentment. There are words that describe those feelings, but there is also an understanding that if we hold those feelings we are actually harming ourselves. We are only meant to hold those feelings temporarily, because the translation of those words helps us understand that “as I hold this, I’m hurting myself, so I’m only holding it for a little while.”

“Knowing” or holding hurt and suffering from the past is described as “already knowing.” It’s that little voice in your head that tells you the way things are, and the way people are – an “already knowing.” It’s like putting glasses on so we only see through that lens of judgment. It is like a boomerang that goes behind our backs, but then as soon as something happens, the feelings are re-triggered. For example, a couple of years ago, the discovery of children’s graves at the Kamloops Indian Residential School brought all that stuff forward and created a nationwide reaction.

People are confused about what acceptance really means. I think we are stuck with the idea that acceptance means having to accept all that happened; but that’s not the case. We can’t change the past – it happened the way it happened. We can change our reaction to it, and how it lives in us today. I can remain the victim of another person forever, or forgiveness and letting go can help me take back my power. The other person could go to jail, but that does not heal my trauma. Forgiveness does. Forgiveness is not for the weak; it’s for the strong. For Indigenous people, it is a part of who we are. The word for forgiveness in our language is so vast. It’s an experience and a gift you give yourself. It has nothing to do with the other person.

Returning to Spirit, using visual and experiential processes, offers a gentle way of teaching; yet it’s very disruptive, it wakes people up. It’s like throwing a bucket of cold water on their faces.

I went to Rome and heard the Pope’s apology. Great! However, no apology by the Pope or the government can take away the harm, and I think that is what people fail to recognize.

My favorite part of the Rome visit was being able to do pipe ceremonies alongside my brother Friar Francois Paradis at the General House of the Missionary Oblates of Mary Immaculate, and the genuine interest it sparked to know and understand us. That is an experience so many who came before me never had. They made sacrifices, they experienced pain, some never came home. I believe that the ancestors want reconciliation for me; maybe as I heal, they are healing too. The best way I see to honor them is Mino-Bimaadiziwin (holistic health), and to pass that legacy of well-being on to my children and grandchildren.

Hatred and resentment are passed from generation to generation. There are people who never went to residential schools but are walking around like it happened to them, carrying and perpetuating the anger and resentment. Unfortunately, they do it at the cost of their own peace. I don’t want to pass that stuff on to my son.

We can’t change the past –
it happened the way it happened.
We can change our reaction to it,
and how it lives in
us today.

For the last 20 years, we’ve been trying to reconcile in a vacuum, trying to heal without the other, and we need both. That’s what’s unique about our process. At Returning to Spirit, we are working with Indigenous and non-Indigenous people. Each is different. And there are biases in judgment and assumptions on both sides.

We give them the tools to be able to set their biases aside for long enough to have a conversation. This is a tool for reconciling all relationships.

As I let go, as I continue creating peace for myself, I believe that my ancestors are also healing on the other side. It is beautiful that I’m living at a time in history where this is actually possible.

There are a lot of people, both Indigenous and non-Indigenous, who are frustrated because the idea of reconciliation feels like a never-ending cycle. So how do we move forward? By everybody recognizing that this is something we live with, that we need to do our own work rather than expecting other people to make it okay. The government can’t do it for us.

How do we address generational trauma? By doing our own work. We’re part of it all. It doesn’t matter what country you go to, every single Indigenous culture has a creation story. What runs through all those stories is that we are a part of creation, and we are made up of everything. Our bodies are 70% water, and our voices are part of the wind. How we speak, and how we take care of our possessions, we must take care of our wind.

I love the word Namwayut, which means we are all one.2

1The Indian Residential Schools Settlement Agreement, the largest class-action settlement in Canadian history, began to be implemented in 2007. One of the elements of the agreement was the establishment of the Truth and Reconciliation Commission of Canada to facilitate reconciliation among former students, their families, their communities, and all Canadians. 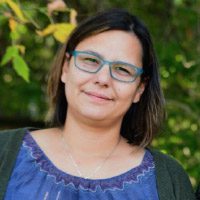 Lisa is the Executive Director at Returning to Spirit, and a member of the delegation of indigenous leaders who met the Pope to invite him to Canada to apologize for the harms inflicted on generations of indigenous families. She is from Hollow Water First Nation, Manitoba.