Home› Inspiration› Matter, energy & what else?

Does the Unified Field Theory – the theory of everything, as it is called – really explain everything? VICTOR KANNAN explores this question and examines the meeting point between scientific thinking on the subject and the observations of the great yogic scientists of the last century.

There is a struggle in the scientific community to neatly tie together all the theories of physics: many scientists believe there is an inherent structure and order to the universe and it operates inexorably. All exceptions, like objects out of orbit colliding with each other, are still explained as the force of energy from the Big Bang carrying them through the unstable process, but eventually towards an equilibrium arising out of a collision with other planetary objects in motion, or finding an orbit around a planet or a moon with gravitational equilibrium.

But this theory has again missed the world of metaphysics – a word clearly coined because of the inadequacies of physics alone to explain all things manifested in the universe. The word came about in the mid-16th century, the Latin metaphysica, based on the Greek ta meta ta phusika, ‘the things after physics’, referring to the sequence of Aristotle’s works. The title came to denote the branch of study treated in the books, later interpreted as meaning, ‘the science of things transcending what is physical or natural’.1

So, what is beyond the physical? Of course it has to do with the mind, which is at the core of manifesting physical and philosophical things. Thoughts, feelings, moods and imagination form part of this mind. The mind is not an organ in the body, like the heart and the brain. The mind is a well-recognised metaphysical organ! Out of the mind comes consciousness – the field of action of the mind. But then the components of thinking and their association with the ego (one’s own self) and not the collective oneness of everything, limits its expansion.

Now coming to the search for a unified theory of everything both physical and metaphysical, can there be such a theory? It may be possible only if we combine matter with energy, and both with consciousness.

Pictorially, we can explain the components of the unified fields of the physical and the metaphysical as follows: 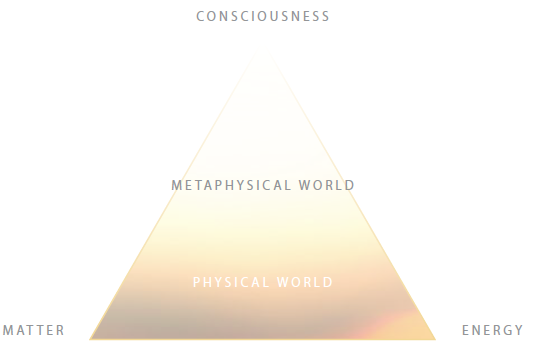 The participants in the triangle at the base partake more of matter and energy. As they incorporate more of the life-giving force for consciousness, it becomes possible for them to move up the pyramid to an existence that is in the metaphysical world.

We have the traditional view that matter produces energy and that the two are related. But I wonder if energy can be created without matter. For instance, today I was tired and did not want to exercise. I meditated and relaxed. Then I found some energy and went to exercise. As I went beyond 45 minutes, I felt a second wind and continued beyond what I had ever done. It was a physical breakthrough for me, and I came away wondering what gave me this energy. I had not eaten anything and had only relaxed and meditated. Where did this physical motivation and energy come from?

So, a metaphysical act gave a boost to physical manifestation. Energy came out of an act of doing nothing – an act of nothing, or meditation, which perhaps worked on my thinking or conscious resting.

Another equation that came to mind in this context is

where X is the level of frequency of life. The higher the frequency, the more present is the being. Conversely, as ME approaches zero, than X tends towards infinity.

So, as we reduce our ego towards zero, consciousness soars towards infinity, and joy, peace and universal love reign supreme.

While these may be dismissed as clever imaginations, it was worth exploring the connection between matter, energy and its utilization for boosting one’s ego or for understanding its relationship to one’s consciousness.

In this context, it is necessary to recognize the saint from India named Ram Chandra (1899- 1983) who talks about a type of energy called Transmission that nurtures human consciousness. He defines transmission as the energy needed for the transformation of man. In his words, “Transmission works in the conversion of matter into energy, and energy into the Ultimate.”2

The Big Bang is largely accepted as the theory that explains how the current universe came into existence from a singularity. From that singularity, massive energy was released, which in turn created matter and eventually life. If this expansionary process reversed itself, what would happen?

In a paper published in ‘Physical Review Letters,’ physicists Nemanja Kaloper at the University of California, Davis, and Antonio Padilla at the University of Nottingham, have proposed the cosmological collapse mechanism and analysed its implications, which include an explanation of dark energy.3

What Ram Chandra says may be a precursor to the possibility of a black hole absorbing all of the manifest universe into its singularity. So, this idea of transmission helping us make that journey back home is where physics and metaphysics meet. So with this, do we also have a unified theory?

I leave it to scientists, with this axiom: What saints have intuitively known for a long time seems now for scientists to prove.